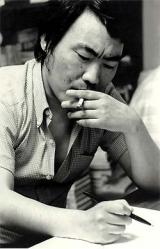 Yū Aku was famous for contributing lyrics to many recording artists since 1967. Mainly during the 1970s, more than 20 of them reached #1 on the Japanese Oricon chart, and seven singles sold more than a million copies. Over 500 of his compositions which were released as singles have entered the Japanese record chart, and they sold in excess of 68 million copies from 1968 to 2007, making him the most commercially successful Japanese lyricist up to that point. As of 2015, total sales of the singles he has written exceed 68.3 million copies, making him the second best-selling lyricist in Japan behind only Yasushi Akimoto.

Throughout his 40-year career as a lyricist, Aku won the Japan Record Award five times. He was also acclaimed as a novelist, and produced several award-winning works. In 1999, Aku received the Purple Ribboned Medal of Honor from the Government of Japan, in honor of his long-term contributions to the Japanese entertainment industry.

His manga career was centered on writing stories for Kazuo KAmimura

On September 12, 2001, Aku underwent surgery to remove his kidney cancer. He continued to work while undergoing chemotherapy until he died of ureteral cancer on August 1, 2007.