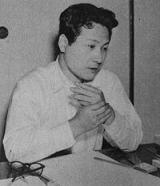 Comments
After graduating from junior high school, Fukui joined the animation department of the movie studio Nippon Eigasha as an animator. Frustrated with the business, he turned his back on animation when the studio closed in 1949. The same year he made his manga debut.

In 1952 his judo comedy Igaguri-kun became a big hit. In the wake of this success he developed a fierce rivalry with Tezuka Osamu, each trying to outdo the other.

Fukui suddenly died on June 26, 1954 from karoshi (overwork). At this time he was writing Akadou Suzunosuke, which was picked up by Takeuchi Tsunayoshi and became a huge success.