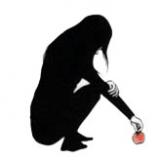 Comments
Tsugumi Ohba is the pen name of a Japanese gensakusha or story writer of manga, best known for authoring the Death Note manga series with illustrator Takeshi Obata from 2003 to 2006, which has 30 million collected volumes in circulation. The duo's second series Bakuman., was also successful with 15 million in circulation.

Ohba's real identity is a secret: although, it is rumored to be another pen name of Hiroshi Gamou.

There are some theories, if some below parts of the letters in word BAKUMAN are erased it turned into RAKIIMAN, japanese pronounciation of Luckyman. Also Chou Hero Densetsu (Super Hero Legend) written by Tarou Kawaguchi, a pen name of Nobuhiro Mashiro is most likely another reference to Tottemo Luckyman.