Login to add items to your list, keep track of your progress, and rate series!
Description
The Arume, a dominating alien race of female humanoids (alien lesbians) has conquered Earth. With total control over the world they have begun live experiments on humans.
One day, out of the blue, a girl that Shouta Yanami has never seen before in his life arrived at his house asking to have sex with him. How will this end for Shouta Yanami? 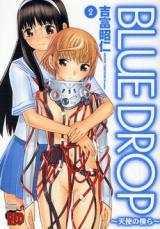 it's not quite yuri
by tekiteki
September 12th, 2013, 1:28pm
Rating: 8.5  / 10.0
It's not quite yuri as other stories from Blue Drop series. Although there are plenty of smutty scenes with *real* girls, there were also plenty of traps (boys in girlish cloths), and, as for me, the main pair actually gave off yaoish vibes (or should i say shotaconish ^_^). Well, I enjoyed it. I think the ending was a bit rushed, but it's one of those smutty stories that have a really good plot. Compared to the main Blue Drop manga, which was dramatic and poignant and the best imho, this one is hilarious and openly smutty.
I think the whole Blue Drop series is a good one, worth reading.

To be fair there are plot holes and it does meander, but its only two volumes and the pros outweigh the cons. Its not often you see a nekomimi general.

gender benders are suppose to defy gender boundaries
by APOKOLYPES
February 23rd, 2010, 4:59pm
Rating: 9.5  / 10.0
I don't know why everyone got so upset over a minor scene towards the end, maybe they didn't read all 12 chapters - i mean yoshimura sempai is a recurring character in several stories of the Blue Drop series,
Spoiler (highlight to view)
sure the ending is kind of sad, but it's left open ended so just use your imagination!
Overall, I would say this is a comedy story, and gender bender (don't get too caught up in the yaoi/yuri themes).
Was this comment useful?  Yes

Although some sites may say this is yaoi and genderbender, it is pretty much non-existent, instead it is yuri, yuri and more disgusting yuri sex.
Makes me almost give up hope on genderbenders. X(

Probably would recommend this to those who are into "yuri-pretending to be genderbender MtoF" types of stories like: No Bra, D Senjou no Alice, Yubisaki Milk Tea and Marugoto Anju Gakuen .

... The only positive thing I could say about this was how I was glad it was kinda short.

awesome
by chinatsu
January 2nd, 2009, 10:45pm
Rating: 8.0  / 10.0
It was awesome xD I just love MTF genben where the guy(who turned into a girl) fell in love with a guy(usually his(or her) best friend) xD The yuri scenes where awesome too xD but the ending sucked...
Was this comment useful?  Yes

What the f*ck...
by Neofit
December 26th, 2008, 9:22am
Rating: N/A
It goes from yuri female supremacist lesbian-farming aliens with a desire to eradicate the male gender, to
Spoiler (mouse over to view)
men charging in and saving the day, putting women in their place (hooray for sexism!) and homo end.
All the while, the relationship developing between the two lead characters being clearly in the yaoi zone; no, it's not excused by the male personality in female body twist.
I don't recommend this to a yuri fan, as you'll probably rage at it.
Was this comment useful?  Yes

weird
by kawaii_kawaii
November 27th, 2008, 4:50pm
Rating: N/A
I don't think of this as a yaoi. This IS yuri for me. Even though the girl was a guy, the thinking, the action, the plot is absolute yuri.
Background story is nice, but this tenshi no bokura is strange. All those developments just lead to nowhere and I don't like it. It just doesn't evoke deep meaning and heartfilling emotions. For me it's just another hentai/yuri story.
However I believe that one part of reading comic is to have fun. So if someone likes to have fun (sexually and strangely) you could read this.
Was this comment useful?  Yes

Exceedingly strange
by Walrothetacoking
November 27th, 2008, 10:28am
Rating: 7.5  / 10.0
Yoshitomi's Blue Drop stories have always been interesting. The original manga was a beautiful set of yuri stories. The anime was sweet and touching. Tenshi no Bokura, on the other hand, is just plain weird.

It's hard to get a bad story with the set-up being that the Earth has been conquered by sexy lesbian aliens. I wouldn't say Tenshi no Bokura was bad either, just extremely strange. Whereas the other Blue Drop manga and the anime focus on relationships developing between the Arume and human girls, this one seems to be an effort to tell us what's happening with the guys under the Arume rule.

Yohimtomi's art is nice as always, especially in the yuri scenes. His plot seems a little harder to connect with though. It's just strange, seemingly going all over the place only to end up going nowhere. I don't really know what to make of it as a whole.

(though it IS an odd introduction, seeing as this is a very niche manga)
Was this comment useful?  Yes

Don't care for it.
by drunkguy
September 27th, 2008, 10:21pm
Rating: 4.0  / 10.0
Generally I like genderbender stories but this one is part of the Blue Drop series and that series always irked me. The backdrop of alien pervert lesbians ruling the world really is incredibly depressing. That aside, this part of the series seems to have trouble maintaining a coherent story progression. It is pretty much a convoluted mess right now with events suddenly happening from chapter to chapter. If you don't care for homosexual elements, stay far far away from this.
Was this comment useful?  Yes