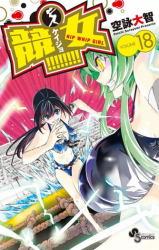 Ridiculous, outrageous, hilarious
by zbo14
May 9th, 2018, 5:47am
Rating: 7.0  / 10.0
Keijo is, at its core, a bawdy ecchi manga about young women who participate in a sport where they use their breasts and butts in a sumo-like sport. The goal is to cause the other participants to touch the ground or fall out of the ring. This, on its own, is pretty unremarkable. What makes Keijo really interesting is the number of tone/focus shifts it undergoes throughout its run.

At the start, it follows fairly standard sports manga themes; friendships are forged in testing/training, the main characters discover the will to train and get better, and battles are fought and lessons are learned. As the arcs progress, however, many of the original themes fall away, and while it's still ostensibly framed as a sports manga, the themes and tropes are entirely derived from martial arts stories like DBZ and Chinese wuxia themes. Despite these tone shifts, the series manages to avoid taking itself too seriously, and manages to keep up its stream of ridiculous, impossible gag breast and butt "moves". While there are points when you might forget you're reading a gag manga, that usually doesn't last for more than a chapter or two.

My main dissatisfaction with the series is related to how much changes over the plot arcs. I thought there was a lot more that could've been done at particular points of the story, rather than moving on to a different phase of the main character's career. In some respects, coupled with the tone shifts, it felt a bit like Samurai Flamenco (which I enjoyed).
Was this comment useful?  Yes

Butts/Breasts battles!! It's badass. believe me! Also, it's really funny.
by Swifft
September 11th, 2016, 9:56pm
Rating: N/A
This manga is stupid as hell but it's no secret. It sounds crazy, but in spite of the completely off-the-wall premise, this is a legitimate sports series with legitimate developments and a good cast of characters. I reviewed this at length and the basic summary of my thoughts is "yeah, the author knows what he's doing" in all the right ways.

Self-aware and hilarious
by AbsoluteTrash
August 12th, 2016, 6:48am
Rating: 10.0  / 10.0
I came in expecting a turd that would keep me decently amused for a minute or two but I now leave with actual respect for this manga.

For anyone who calls this stupid, I wholeheartedly agree. It is indeed extremely stupid. But anyone who gives the series a 1.0/10 because it is stupid would be terribly wrong.

The comedy is top notch, mostly due to how ridiculous the sport can be. I mean, with moves like 'Vacuum Ass Cannon' and 'Nipple Spring Throw', it's pretty obvious this is not a serious sports manga and it doesn't treat itself seriously in the slightest. If anything, this manga is hyper self aware and a fantastic parody of other sports manga.

It has all the cliché hallmarks of other sports manga such as 'The Friends Who Start Off As Rivals But Are Touched By The MC's Sincerity' or the 'Other School Team Who Is Badassedly Introduced As Much Stronger But Get Beaten Through Hardwork/Last Minute Asspulls'. However, by putting these clichés through the silly premises, it becomes a refreshing change of pace that I appreciate.

Throw in a decent storyline, extremely likeable characters as well as fantastic blood pumping 'battles' and I think it's safe to say that it's a very solid series that I do not regret reading.

However, it's important to keep an open mind when reading this due to the astronomical amount of T&A involved. I, myself am not partial to large amounts of fanservice but I still largely enjoyed the manga due to the clever uses of said anatomy.

Overall, if you are looking for a philosophical manga of youths struggling to find their footing in the continuously shifting world of sports, you aren't going to find anything of the sort here. But if you are like me and want to laugh your ass off for the entirety of the time spent reading, then you are in for a treat!

This is very good!
by umichuu
July 13th, 2016, 1:32pm
Rating: N/A
I suppose I understand why there are so many poor ratings. The manga is absolutely ridiculous. I can see people scoffing at this for being outrageous. Though, I absolutely love it. It's thrilling, sexy, and very entertaining. Excellent art and well written dialogue.
Was this comment useful?  Yes

Surprisingly Good
by Uthred
March 16th, 2016, 10:45pm
Rating: N/A
The sport is of course ridiculous. But once you move past this then you find its actually a fairly solid shounen sports piece. You have all the usual genre elements and plot devices and theyre handled fairly well. It's also quite amusing, plenty of lampooning other anime/manga and poking fun at itself (the Gates of Babylon reference was quality).
Was this comment useful?  Yes

It's a shame the people don't understand the purpose of this work
by Diego C Castro
November 30th, 2015, 10:24am
Rating: N/A
Keijo is a series for fun. The work plays with the ecchi and sport genre together, not limited to put a bit of a each in the other, but mix them in a single, inseparable, making the plot of the series does not exist without both.

Although the narrative is not brilliant, the author's expertise in creating a sports believable and yet so absurd, makes it worth the intriguing journey of how a manga with so much fan service can not only use it intelligently as well with good humor. Unfortunately it is not a work for everyone, but for those who please, will please enough.

Do not get carried away by appearances or superficial impressions. Take a chance.
Was this comment useful?  Yes

Not self-aware and extremely stupid
by buttplug
October 27th, 2015, 1:07pm
Rating: 1.0  / 10.0
Imagine if rock-paper-scissors was turned into a professional sport, then make a manga out of it. The only real entertainment this manga offers is the ecchi. The comedy seems to only stem from the ridiculous premise, and otherwise nothing else.
Was this comment useful?  Yes