Login to add items to your list, keep track of your progress, and rate series!
Description
Just after being dumped by his girlfriend for being wishy-washy, our hero meets a high-school girl... with dog ears? Is she a dog? A human? She's wide open, rather naive, and with her around, it's just one crazy day after another. Romantic comedy author Hiroyuki Tamakoshi, author of "Boys Be", brings us the unlikely love story of a hopeless office worker and the extraordinarily beautiful girl who lives with him.
Take care of your doggy! 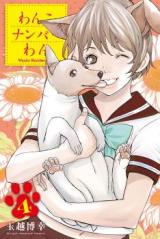 It's pretty good, all things considered
by Samken
October 18th, 2020, 7:59am
Rating: N/A
The story is about a guy who after his sudden break-up with his girlfriend has a psychological break-down and sees his dog as a girl with dog ears, and with her help, his mental wounds begin to heal and he moves on from her into a new love with someone else, it has a pretty nice and conclusive ending with things looking up for the protagonist.

The story makes it clear that the existence of this dog girl is all in his head since any reference of the presence of his dog by an external perspective, shows that it's just a normal animal overall.
Was this comment useful?  Yes

A weird relationship between a man and his dog
by SangMo
March 22nd, 2017, 10:11pm
Rating: 9.0  / 10.0
An indecisive man gets help in his life from his dog. He develops a close relationship with the dog one sort of out of love. He sees the dog as a girl with dog ears, but it seems like she only appears to him like that and no one else. I liked the ending and who he ends up with, but there's something I didn't like about the girl that wasn't touched on.

Spoiler (mouse over to view)
She's his girlfriend at the beginning and when he comes to her apartment, she breaks up with him. The thing is, she's already with someone else so it kind of implies she was cheating on him even though she was ready to break up with him.
Was this comment useful?  Yes

Nice story overall
by morphin007
February 7th, 2015, 11:44pm
Rating: 8.0  / 10.0
At first it's a bit strange because you don't know where it's going.
But actually it's more about the friendship between the owner and his dog, their daily life and of course the love story of the MC with many girls.
The only problem I have is that the dog appear as a human to him (and some others too, laters in the manga) but isnot really a human. So talking together, maybe, but doing things like a human (using a faucet on the other hand....).

And the ending was really nice and cute, even thought the girl he ended with wasn't my favourite (but she was the logical and right choice).

I think you should at least keep reading it until chapter 16 (chapter 13-14-15 aren't fit for this manga, to much oriented to the wrong path...), but from chapter 16 it's becoming really what this manga is.
Was this comment useful?  Yes

Creepy
by dtim
October 6th, 2014, 7:00am
Rating: N/A
The story of a man who has a psychotic break and hallucinates that his dog turns into a girl. Pictures taken of the dog show it to still be just a dog so it's all in his mind. /shudder
Was this comment useful?  Yes