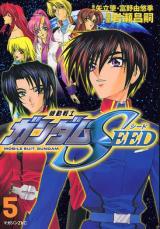 In fact, the manga reminds me of those Gundam SEED Special Edition movies –the series is shown quickly, with the main events present.

I found that some things happened too quickly, and that the relationships between the characters were not developed enough. LOL, if I didn't watch the anime, I wouldn't have known that certain characters have romances going on... Other times, it was difficult to tell who hit whom in the battles. Certain characters did look alike, or were just difficult to distinguish. Also, I didn't like the misspellings here. In the first few volumes, Yzak was written as Isaac, and Orb was written as Aube for the entire series!

I like that some scenes were better explained than the anime. I also liked that the manga showed how -some questions I had from watching the anime- happened, which really did help my understanding of the series.

Despite the flaws the manga adaption has, I would buy all five volumes if I were given the chance. If you're a Gundam SEED fan, this is a must-read! It's a bit more PG than the anime, and there was even a scene added here that gave me a laugh! You get to see your favourite characters again, with their beautiful eyes and long legs.