Login to add items to your list, keep track of your progress, and rate series!
Description
"The youth ensemble of love, food and war..." 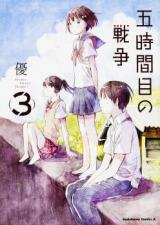 Unfortunately the Author Died for anyone waiting for more volumes
by Mechanizer
December 23rd, 2020, 3:50pm
Rating: N/A
With that out of the way, let's dive into the story:

Boy (MC) wants to get sent to war to fight to protect his friends and family and also explore the outside world. He and his childhood friend aren't allowed to for reasons unknown by higher ups within the town council or army.

That in itself is interesting already since we have a motivation and counter goal to work through. Unfortunately we were never shown who made the choices or why because the story chooses to show loose training (how to handle a gun, track and field, research) for the side characters, the aforementioned childhood friend cooking and talking to a stuffed magical rabbit and the MC being a jackass to his friends because of resentment for not being drafted causing drama within his friend group. There are more interesting factors at work: One of the classmates researching the enemy (Who is studying alien tech), two of the classmates going through PTSD (a mysterious female transfer student and the MC's best male friend) and one of the female classmates finding out the face of the enemy but the story doesn't focus enough on the war to really be invested in this piece.

I liked how diverse the cast looks and the emotional stakes with everyone except for the main boy but the lack of focus on the war and the consequences it has for the main setting -aside for some injuries and shallow psychological issues- leaves much more to be desired. Yet again...with the author's supposed death in 2017, his story remains unfinished.
Was this comment useful?  Yes

Looks Simple, Is Amazingly Complex
by 5Cats
October 21st, 2016, 11:01am
Rating: 10.0  / 10.0
This is going to be a long story, moving along at a snails pace. Hooray!
The characters are adorable, the setting looks innocent enough, yet the plot is nightmare inducing.
There's mystery and angst at every corner, and on top of that? Space aliens from another dimension! Or something, we don't know much about them at all (as of chapter 13) which is fine.
This is a character driven sci-fi mystery disguised as school slice of life. Only the life of a typical child in this universe includes weapons training, becoming a soldier at age 14 and being sent to the front lines to battle space aliens! With a high chance of being killed... or worse.
I cannot recommend it highly enough, every chapter addresses previous questions, and opens a whole new set of new questions too! Unless you like simple, fast-paced action? Then no, lolz!
Was this comment useful?  Yes

Pretty art but there's something that doesn't add up
by moredrowsy
September 16th, 2015, 3:29pm
Rating: 7.0  / 10.0
The premise is that aliens are attacking Earth and the kids on a certain Japanese island is supposedly the last bastion of mankind. Sounds interesting but the pacing and dialogues are out of sync.

The male main character is the typical handsome and honestly outspoken but he's shortsighted. You know, those type of characters that yell out whatever they have on their mind but doesn't think about the meanings or consequences.

To create the tragic atmosphere, the series will occasionally throw in some side character's tragic past with one or two pages, which I supposed is to make the readers feel sorry for them. However, it's poorly executed because one or two pages doesn't really allow the readers to connect with them that much.

The worst part is that even with 8 chapters in, the story has not developed. The story is simple and it's not a slice of life but with the haphazard execution, there hasn't been anything that allowed the reader to grasp an understanding of that world. For example, they are on the island but it doesn't seem like the children can be self-sufficient to provide raw food material, electricity, clean water, and etc. Yet, everyday necessities are not desperate when that island is the last bastion of mankind...

All the characters in this series are quite likeable and admirable except for the male main character (he acts like a clueless douchebag at the most important scenes), which shows you how much this series failed...

Overall, this series is pretty to look at but it's a story without much realism and substance (as of volume 1).