Login to add items to your list, keep track of your progress, and rate series!
Description
The literature industry is suffering from the publishing recession. While the literary magazine 'Mokuren' was grieving over the present state of affairs, a composition intended for their Newcomer's Award was sent to their editing department. However, it completely ignored the application rules. It should have been torn to shreds, but the work caught the eye of a sole editor. As a result, the world began to change.

Note: Won the 10th Manga Taisho in 2017 and the 64th Shogakukan Award in 2018 for General Manga Category 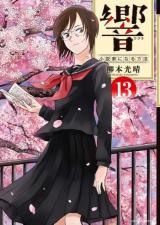 Telling vs. Showing
by MondSemmel
February 21st, 2022, 3:46pm
Rating: 7.3  / 10.0
This story is ostensibly about a school-aged genius author, but that part is all Tell, no Show: we rarely see Hibiki writing, and the most we learn about *what* she writes is the story titles and synopses. That's just a deeply unsatisfying and fundamentally flawed way of depicting a story about genius. If you want to write a *good* story about a craft, whether it be acting or writing or volleyball or whatever, you have to be something of an expert on the topic, and the mangaka fails at this part.

What remains of the story is Hibiki being something of a bull in a china ship. She's all willpower and defies any attempts to control her. That part of the story is amusing, albeit somewhat repetitive.
Was this comment useful?  Yes

Skip
by ZombieObed
August 24th, 2018, 6:32am
Rating: N/A
The main character is praised for every thing she does. She can do no wrong. When she's doing anything wrong, it becomes right and everyone else is at fault. If she gets caught, then they instantly forgive her. It's frustrating to read this because of it. Anything an adult says or thinks in regards to her is nothing but praise. Simple wish fulfillment.
Was this comment useful?  Yes

In rushing, it loses nuance
by Zedta
August 11th, 2018, 8:46am
Rating: N/A
By chapter 43: This manga makes me feel uncomfortable because it is trying to do too much all at once. It tries to present the various aspects of an author's world, but it doesn't really dive deeply into anything, and so all these 'aspects' became superflicial and gimmicky. As Hibiki's talent cannot be truly shown, only referred to through via other characters' eyes, her interactions with them are crucial to her own portrayal. Yet after 5 volumes, every character other than Hibiki is pretty much fusing together into one vague, generic persona that has nothing to offer other than being overwhelmed by Hibiki's personality (her talent is just tool to push the storyline). This is terrible because Hibiki herself gets increasingly shoehoned into a rigid heroine position. She carries the blinding 'hero halo' around and can never do wrong. Here, I don't mean that there aren't people like her, who are awkward and violent and stubborn while also extremely good and wise (concerning her area of talent), I mean that her actions, regardless of the right or less right (lol) ones, lead to pretty much the same reactions from everyone around her. Everyone is becoming one dimensional, which leads to Hibiki becoming one dimensional. I keep feeling like the author was afraid to give Hibiki true backlash - those caused by differing world view, lifestyle, personal philosophy, etc. Rika came closest to that, but even then it's over too soon - the closure was made to be much more dramatic than the character's process of inner growth, I felt as if little had happened ?). My speculation for vol 6 is that the media play dirty and shine a bad light on her. If so, everything is even worse, because such types of plot point put her in the victim position - karma element would be down played, because thus far, everyone has been really tolerant of Hibiki. Even if Hibiki learn a moral lesson from that, it'd be a weak one.
Was this comment useful?  Yes

Just Amazing
by cecropiamoth
May 21st, 2018, 8:44am
Rating: 10.0  / 10.0
As an old man who's been reading manga as a hobby for 9 years, I've learned to never forget that it's an entertainment medium first and foremost, just meant to be fun, and therefore always feeling free, normally, to use the same old settings and stories again and again.

But sometimes a mangaka doesn't, and instead breaks new ground, like here. This story seems to be about, of all things, the production of literature--why and how its creators do it, and ditto for its editors and publishers. This exploration of a world so totally foreign to manga's usual subjects is conducted via a collection of smart and likeable characters, starring above all a firecracker of a teenage writer. If you've been looking for a story about a "strong woman", Hibiki's the real deal.

Characters aside, the drawing is serviceable, that is, sufficiently realistic to convey a story that's firmly set in the real world, and the storytelling is exemplary: It's easy to follow what's happening, who's who, and what they're most likely up to. At the same time, there is absolutely no way to predict what this collection of distinctive people will do next. And above all, Hibiki at this point, 15 chapters in, dominates the proceedings as the bomb who may always go off again at any moment. The suspense is absorbing.

Seinen Theme, easy to read
by exit
April 27th, 2018, 6:47pm
Rating: 8.0  / 10.0
By mangaka style of drawing, it make you think, this is seinen manga. At the same time, people all around are no naive, many weird things happen, and resolve very easy (or even not give you a pressure and go through it like nothing happen - it's a good point in my opinion.). However, it is easy to read and don't pressure you too much.
I like it with the way it is. easy to read. bring you a little smile all the time.
Was this comment useful?  Yes

Good but Disagreeable
by blackluna
April 12th, 2018, 3:01pm
Rating: 8.6  / 10.0
Honestly, this work is really good: thought provoking, decent art, small dabs of humour, interesting plot, awesome protagonist, and so on. It has plenty to say about life, and Hibiki's lack of restraint is often quite satisfying (especially where self-centred jerks are involved). It has just one problem: its portrayal of genius and talent, in fact, I take issue with serval points it has on this topic. These are (without giving anything away), genius, including literary genius, always shows up early; the less common sense, the better the author and the more they have to say; and talent being limited (once you run out of things to say, that's it). While it isn't entirely off the mark, and strong talent tends to come with some kind of unique trait they bring to their work, this isn't always due to an unusual perspective. It could be insight, sensitivity, compositional sense, you name it. Additionally, going back to the same topic isn't necessarily needless: the initial work might not be the final product, a mere change of focus may have significant effects on the exact direction, there might be variations on a theme, the author might be searching for the right product. All of these can easily be seen by looking at the biographies of numerous authors of Literature (or "pure literature," as the manga calls it): while individuals such as Emily Brontë seem to prove the manga's narrow perspective on the topic, there's also her equally talented sisters, Fyodor Dostoevsky, Jane Austen, Franz Kafka, John Keats, Natsume Sōseki, and many more. Finally, there seems to be an objective scale of talent in this novel, which is gut-wrenching (besides, the Arts are subjective). Because such statements are all over the place in Hibiki, which I otherwise find captivating, leaves me wanting to logically tear down all of that gammon and spinach to Yanamoto-sensei's face (not that I know Japanese). In summery: tread carefully.