Login to add items to your list, keep track of your progress, and rate series!
Description
Nervous about being alone with her new boyfriend, Takeda, Yuma insists that her once angelic childhood friend, Hotaru and Hotaru's boyfriend come along for a double date. But when Hotaru begins to touch Yuma and volunteers herself as "practice", Yuma feels inner turmoil as she enjoys the now devilish Hotaru's kiss more than Takeda's. 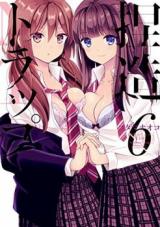 Note: You must be logged in to update information on this page.
Forum Posts Click to view the forum
NTR: Netsuzou Trap Ends
over 4 years ago

ಥ⌣ಥ
by Miachann
July 28th, 2020, 12:15pm
Rating: 9.0  / 10.0
i heard Fujiwara and Takeda get their own series(?) it is true or not.. i ship them but somehow not ship them in the same time.., and i just want Takeda to be happy even i am a hardcore fujoshi i hope Takeda can get someone nice idc boy girl just give him someone nice.. he deserves it ಥ⌣ಥ and i know this manga genre is ntr but- but- it is just me who want to throw Yuma from the building??

Contradictive
by jeffreymgibson
August 8th, 2019, 5:26pm
Rating: N/A
Some of their actions make no sense. I use the spoiler tag so I don't accidentally ruin the story for others.

Spoiler (mouse over to view)
Hotaru only cares about one person in this world. That person is Yuma. The only thing Hotaru wants is to be with Yuma. Yuma finally confesses to her and this should of made her 100% completely happy but the mangaka had to throw in the overused trope where Hotaru ran away and left Yuma with no clue of where she went because now she doesn't trust Yuma even though they have spent their lives together. of course in the very last chapter Yuma goes and find her and even though there back together that havn't worked out their usses at all. nothing is really resolved and you walk away from this series not feeling good about their future. Very poorly written. This is probably popular is becuse the girls are cute. Other than that, this series doesn't have much going for it.
Was this comment useful?  Yes

great and deep
by riko_dewayne
June 2nd, 2019, 8:18am
Rating: N/A
i read this in 1 day. so i didn't have to wait for next release.
believe me, those bad ratings come from having to wait between releases.
the length just right. the twist, in the end, fits the whole story.
imo, no bullshit turns.

this is my favorite😅

A victim of bad PR
by Caraise Link
August 21st, 2018, 3:24pm
Rating: N/A
As another commentor pointed out, the title is misleading (possibly purposefully), as it doesn't really feature netorare per se. To put this in the most non-spoilery way I can think of,

Spoiler (mouse over to view)
Hotaru's het relationship is crumbling from abuse, and Yuma's het relationship barely gets off the ground and crashes early due to lack of interest. So the infidelity really only lasts about five chapters. Frankly, the infidelity that does exist is more the fault of heteronormativity influencing Yuma's decision making more than anything, so take that how you will.
Was this comment useful?  Yes

There's cheating, but....
by SangMo
December 26th, 2017, 12:39pm
Rating: 9.0  / 10.0
The fact that NTR is even part of the title is just wrong in my opinion. Despite the infidelity, NTR itself doesn't involve romantic feelings and I think that's where a lot of people get confused.

Spoiler (mouse over to view)
While these 2 females are cheating on their boyfriends with each other, feelings are involved. These girls are in love with each other. Neither of them were "stolen" away or NTR'd. They fell for each other. Surprising for it to be as dark as it was, the ending is pretty happy. Yuma and Hotaru end up together.

I think the title will turn off a lot of people sadly.
Was this comment useful?  Yes

Not worth it
by Senrosj
October 24th, 2016, 8:47am
Rating: 3.0  / 10.0
Netsuzou Trap - NTR begins in a decent way. It has ntr, but you see it from the perspective of the girl doing the cheating, so the conflicting feelings are less than with normal ntr.

What I disliked is how stupid and oblivious the protagonist is. If she had a working brain and opened her eyes, everything could be easily resolved, but she is stupid, so the drama keeps growing and growing in each chapter.

You have Yuma, the protagonist who is dating Takeda, a kind guy from her basketball club.
You have Hotaru, Yuma's childhood friend who is dating Fujiwara. She always teases Yuma and she basically starts the problems, that aren't really problems, but the protagonist is stupid so, there is a lot of drama.
You have Takeda, the kind basketball player who is getting cheated on by Yuma.
You have Fujiwara, an asshole from the very best out there. He is Takeda's "friend", but he wouldn't mind, actually he would enjoy getting it on with Yuma, Takeda's girlfriend.

This is just my take on what has happened until the 11th chapter that has been translated.
Spoiler (mouse over to view)
Yuma was the only one Hotaru was able to be friends with, so she was always with her and she ended up falling in love with Yuma. Our dumb protagonist never knew (but it hasn't been explicitly said that Hotaru loves her).
Yuma is able to make friends with other girls, unlike Hotaru who only has Yuma, so at one point Hotaru gets sort of left behind by her. She gets a boyfriend to fill the time she doesn't spend with Yuma anymore, which hurts Yuma for "some reason".

Hotaru begins kissing, groping and pleasuring Yuma, who never really says no or makes some resistance except for one occassion where she does reject Hotaru. The Fujiwara sees them kissing and learns their secret and from here things go downhill.

In the end Yuma gets depressed after fighting with Hotaru and breaking up with Takeda, which Hotaru realizes. Hotaru then goes to Takeda to ask him to try it once more with Yuma and gives him a talk in which she indirectly says she loves Yuma, but because she is hurting she will give up on her.

Things get brighter for the dumb girl, but Hotaru distances herself from Yuma who is oblivious as to why. Fujiwara gets his hands on blackmail material of Hotaru and Yuma on a steamy situation and as of now he hasn't used it. Hotaru begins working at a cabaret so that she is able to move out from her house to get away from Yuma, her neighbor. Yuma finds out and gets depressed.

TL;DR: Hotaru loves Yuma, but Yuma doesn't know. Yuma loves Hotaru, but she is dumb enough to not realize it. Fujiwara is an asshole and Takeda is a kind soul in the middle of three individuals who are going to hell.

I don't recommend this. I wouldn't say this is forced drama, but it is incredibly stupid drama. If you want romance, yuri, cheating and cheap drama, then this isn't bad, but for me, this is pretty bad.

Spoiler (mouse over to view)
Hotaru and Yuma are childhood friends who live next door to each other. They've always been close. When they grew a little older, Hotaru started dating one boy after another, presumably sleeping with them, which isolated her from the rest of the girls at school. Yuma is more innocent in that regard, and just got her first boyfriend, which made Hotaru pretty jealous. Under the pretense of "practice ", she started kissing and touching Yuma. Yuma isn't sure what to do. On the one hand, she likes her boyfriend, but on the other hand, she enjoys Hotaru's intimacy more.

There's definitely more to the story, as seen at the end of chapter 2, so I'm really looking forward to reading more.
Besides that, the art's pretty nice. The editing is meh though.

I'm not into the whole NTR thing, but I'm quite digging this one.
Maybe because it's about two girls.
Was this comment useful?  Yes