Login to add items to your list, keep track of your progress, and rate series!
Description
Meet Taki Takanosuke, an elderly gentleman who likes taking walks. Along the way, he also manages to capture the hearts of many women. 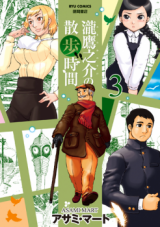 It's definitely ok?
by tremofx
December 10th, 2020, 9:51pm
Rating: 7.0  / 10.0
Like I really enjoy the vibes of this manga and how it's trying to be peaceful and more laidback but...it just kinda wonders and is aimless. Also I like the idea that old people can have relationships too yes but this is a little different and the lack of clarity makes some of the relationships he has with people...confusing? Lastly there's kind of a plot that comes in at the end and wants you to believe it didn't come in at the end but it very much did.
Was this comment useful?  Yes

Fantastic
by Boku Girl
January 28th, 2017, 9:37pm
Rating: 10.0  / 10.0
Excellent use of imagery, spacing, and paneling with sensible flashback placement to create a smooth and compelling story about a man, a town, and a clock tower. I'll spoil it if I say more, so go read it right now!
Was this comment useful?  Yes

I just can't it is just :^)
by Oupii
January 7th, 2016, 6:36pm
Rating: N/A
I rarely say anything anywhere online but this mango just keeps hitting me where I want to be hit and tickles me where I want to tickled. The way of using imagery instead of any kind of text in the way of storytelling in many of the chapters is just great. The art style is just great, just fucking great. Might not be for everyone but I don't fucking know. For Jebus Noodlekingsworth's sake it is some old awesome dude building his harem even though he doesn't realize it himself. It is awesome shapes on a paper gone wild with sexuality, because people with thoughts and me just being retarded.
Was this comment useful?  Yes

My Dream Come True, Sort of
by cecropiamoth
December 24th, 2015, 6:43pm
Rating: 9.0  / 10.0
I just read a history of manga, and they mentioned that there is even manga for old people. I have seen only one or two translated, and this seems to be a third. As an old man, I like it. What this amounts to (3 chapters in) is a gentle male fantasy parallel to many of the countless harem manga, only with an old protagonist.

Here's a little secret. Old people still are men and women, and still are attracted to the opposite sex, including YOUNG members thereof. We just know nothing will come of it. (except, occasionally, for men who are rich or of high status) This appears to be a manga that fulfills that attraction vicariously. I would bet it will be limited in how far it goes, but meanwhile, there is a reality of life being depicted imaginatively here.

It's best that you young folks just deal with it! Someday you'll be old too, after all.

Torn feelings.
by Jandalman
December 24th, 2015, 7:38am
Rating: 7.0  / 10.0
On one side there are a lot of cute moments from the girls that just give you pure waff. But on the other hand there's the awkward moments where they fawn over an old man who is forever ruined in my eyes by other readers mentioning he has the pedobear smile and I can't unsee it. That and the fact that he sometimes stares at women a tad too long.

Nice.
by Creeper
June 8th, 2015, 8:37pm
Rating: N/A
Im enjoying the laid back feeling of this manga but in my darker thoughts I keep expecting to see a "Six Months Later" followed by a scene of 4 girls chained in a basement.
Was this comment useful?  Yes