Login to add items to your list, keep track of your progress, and rate series!
Description
A story about a long-necked girl's love life:
Kanoi Natsuki and her childhood friend Itsuki visit the same school and there seems to be more between them besides friendship. As a Rokurokubi, her quirk of stretching her neck is normal for her and her surroundings, but it's not always her choice to stretch it and although she has feelings for Itsuki, she can't tell him what she feels. Ultimately, she has to go through misunderstandings and shame. Itsuki, meanwhile, manages to make any awkward situations dissolve or maybe not? 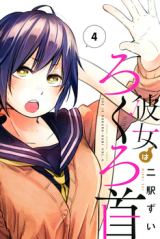 Wished it was longer with the same ending but
by AnimeWatcher06
June 10th, 2018, 3:02pm
Rating: 8.0  / 10.0
The ending was so satisfying but it was like the story was just ended so sudden. Still, I like the relationship between both main characters built. It was really good but I just wished it was longer.
Was this comment useful?  Yes

AXED?!
by zarul
February 11th, 2017, 11:25pm
Rating: 8.0  / 10.0
I dunno why, at the beginning, the story is a little slow but I guess starts from around chapter 15 the story keep getting good with introduction of some new interesting youkai character and everything & suddenly, its just end. Just like that, I really like to see more youkai character and slow development of their love. I dunno if its really axed or not but I really like it, I hope there will be kanojo-wa-rokurokubi 2! I hate this kind of fate of my favorite manga!
Was this comment useful?  Yes

YES..the ending was rushed x_x
by noxplum
December 14th, 2016, 4:21am
Rating: 8.0  / 10.0
I loved how i could feel for the emotions/situations happening within the work. You know it's a good manga when you can really laugh & take the series for what it is. However, i was left wanting MORE.. more backstory, more yokai characters, more development etc. When it all ended, i just layed there w somany questions left unanswered ._. Don't get me wrong, i like this manga but i would've LOVED a flash-forward atleast or some type of hint that the two MC's were still keeping in touch or idk A FRIGGEN BONE for all i care as long as its SOMETHING. Whatever i liked it alot..
Was this comment useful?  Yes

Rushed but good
by XINES
December 9th, 2016, 12:26am
Rating: 10.0  / 10.0
This a great short series actually. It's better to end soon with a proper conclusion than dragging for ever and ruinning all the work with a blue balling ending like nazo no nakojo X.
Spoiler (mouse over to view)
At least they kissed and did it

That ending was so rushed, it had no actual conclusion. Nope nope...
Was this comment useful?  Yes

So, the manga's great. Tomboyish (which is to say, refreshingly not the demure shoujo archetype) female lead, who happens to be able to extend her neck to arbitrary lengths. And no one views this as weird. Which is a beautiful effect in and of itself, and allows for a lot of great comedy.

But beyond that, the other stand-out element in the manga is how well it renders the physical aspect of budding love; how her eyes go out of focus when the boy she likes touches her, the way her lips wriggle when she thinks of how his would feel against them.
It captures those charming tells with a documentary precision. Very refreshing; "Taiyou no Ie" had a bit of this, and "Yubisaki Milk Tea", but it's taken up to 11 in this series.
Was this comment useful?  Yes

Wild
by AUOdere
July 1st, 2015, 3:21pm
Rating: N/A
Well. The synopsis here misses the biggest plot issue, specifically the heroine's neck. It's a decent story, mediocre at best, with a character quirk just stuffed in to fill in the blandness. Read if you've got nothing to do and nothing to read.
Was this comment useful?  Yes