Login to add items to your list, keep track of your progress, and rate series!
Description
Karin is an average girl...at best.
She's not good at sports and gets terrible grades. Plus, her parents are dead and her beloved cat Shi-chan just died, also. She's miserable...but everything is about to change. Because little does Karin know that her mother's ring has the power to make her a goddess!
Soon she and Kazune, a brusque but cute boy with godlike powers of his own, will have to fight to protect Karin's ring and Kazune's cousin Himeka from the evil forces of Kirio Karasuma...who has divine designs of his own. 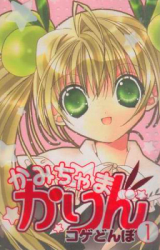 It's for kids
by zengoats
January 22nd, 2013, 11:53pm
Rating: 6.0  / 10.0
It's hard for me to review Kamichama Karin because 1.) the demographic is obviously young kids and preteens, and 2.) I'm sentimentally attached to it because I read it when I was a young kid/preteen. That being said, Kamichama Karin is a standard magical girl manga. The art is very Koge Donbo (gigantic eyes, frilly clothing, and shoujo sparkles), which works with the manga. Tropes galore. Surprisingly, Kamichama Karin has some genuinely funny moments. Not much in way of emotional depth, but that's to be expected. The one thing that bothers me (even with in the context of Kamichama Karin being a magical girl manga for kids) is the weird twist ending. There was almost no buildup to it, and it just felt really forced and out of place. I feel like the series could've wrapped up in a more cohesive fashion.
Otherwise, if you're in elementary or middle school and like the genre, I feel like this is a good pick. If you're older, I mean, you can still read it, but I don't think it'll appeal to you as much.
Was this comment useful?  Yes

am i the only 1 who thinks this?
by kazune-kun
January 16th, 2011, 2:40am
Rating: N/A
if u have read this defenantly read the second series,as a matter of fact i like the second series a bit more not saying that this is bad i really like this 1 to. but the other 1 is better by a bit.if u cant find the second 1 it is called kamichama karin chu and u can find it on syuura.i think i am the only person who really likes this manga cus all the comments i c r negative in 1 way or another if u think the same as me the great. i would be glad 2 now if u do like this manga as much as i do. the anime is really good 2. im sorry 4 any mispellings in this.
Was this comment useful?  Yes

Well...
by Starkick
January 20th, 2009, 1:51pm
Rating: 7.5  / 10.0
Very, very confusing, I thought. Absolutely amazing artwork, well-developed characters, original plotline - but very confusing.
Spoiler (highlight to view)
I mean, we never found out anything about Michiru, or Michiru's ring. And what about that bit in the end about Karin being an experiment'? All that's said about that is that she's not a clone, and that whatever they did to her was 'done for her own protection', whatever that means. And why did the Zeus ring react to Yuuki, and then later work for Glasses Guy (love that name, xD)? And what happened to the Himekas? Did one of them die?
All in all, there were many loose ends, but there is a sequel, so I hold out hope. And it really was a wonderful manga, the ending just disappointed me. If nothing else, read it for the art - it's some of the best I've ever seen.

cute
by lynn101
September 20th, 2008, 3:47pm
Rating: 9.0  / 10.0
i love the art cause it's soo cute
the characters are also interesting but the main character gets on my nerves a bit.
the plot is really interesting though.
one of my favs.
Was this comment useful?  Yes

hmm..
by Disremembrance
July 3rd, 2008, 10:47pm
Rating: N/A
cute, a pretty easy read.
karin is one of the most ridiculous heroins I've ever seen.
be prepared to go huh?! every other page. seriously.. XDD
I wonder if i should start reading the next series...
*ponders*
Was this comment useful?  Yes

So cute~
by Kittycat101
June 30th, 2008, 5:11pm
Rating: N/A
i saw the first ep of this anime but i had no idea it was a manga! *_* as for where to get the downloads its not very hard ^^; just go to the scanlators site the link is even on here! and then go to their project list, find this series, and volilia it has ALL 7 volumes! in fact im downloading them right now o^^o
Was this comment useful?  Yes

So So
by akasak
June 2nd, 2008, 5:59pm
Rating: 5.0  / 10.0
It's ok I guess... but I found myself getting confused at times and even then when I figure it out more "stuff" came around to confuse me... I ended up figuring out the story and the art isn't bad but I guess it could have done better if they had spaced it out more... Epically near the end...
Was this comment useful?  Yes

adorible!
by kidayuki
January 27th, 2008, 6:57pm
Rating: N/A
heheh i love this seirse it's so cute (and the color work is stuning!) i love that the star karin as her battle pharse yells "I am GOD!" hehehehe

the ending took about three reads for me to really understand it though
Was this comment useful?  Yes

Hmm
by KimiNoAi
October 15th, 2007, 11:38am
Rating: N/A
it's okay you can say, the beginning was nice to watch. But... ahwell never mind. Volume 7, hmm never mind either XD. For those who like Pita ten, it's a nice manga to read. Although Karin is more ''agressive'' you could say XD