Login to add items to your list, keep track of your progress, and rate series!
Description
When the Earth is threatened by the sudden appearance of undead creatures, a group of young women blessed with powers from a mysterious source rose to defeat them. Now, after three years of apparent peace, the same malevolent creatures have resurfaced. Five magical girls are once again conscripted to war as the Magical Girl Special-Ops force, to defend mankind from an unholy nemesis. 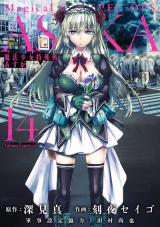 Tense action scenes that only improve as the story rolls on, a pair of entertaining leads, a cast of fun supporting characters, magical girl tropes used to underline points the author is trying to make coated in military paint, and Fukami's usual thematic storytelling methods are all rolled up into a unique package that sells itself enthusiastically, if a little clumsily at times.

The series gets accused of edginess a lot, but it's no more bloody than say, Claymore, and every such scene has a purpose behind it. The writing is pretty tight across the board, with no meandering as the girls mix trying to be normal with desperate fighting, their experiences in the field feeding back into their daily life and vice versa. I'm not sure it qualifies as edge when it's never pointless.

The series also gets accused of being dumb, but I'm just going to say it straight: anyone who thinks so is dumb. It's not Rosencrantz & Guildenstern Are Dead or anything, but a great deal of the story is told indirectly, and it expects you to be able to put pieces together for yourself. Mia trusts Kurumi but not the other members of the Five; it's only after the reader understands all four of the other Magical Five's characters from Mia's point of view that that brief statement comes together: Kurumi is the most loyal team player imaginable by comparison. Asuka herself struggles slowly through the process of 'growing out' of being the simple TV heroine magical girl stereotype that she began her career as, and into a more realistic, combat-capable, and morally-challenged adult, losing both her naivete and the last shreds of normalcy as she does so. Tactics in combat aren't necessarily exposited, leaving the reader to deduce why the characters do what they do, silently revealing the difference between a character with a wealth of combat experience and one who lacks it, even when the lacking character is the one holding the upper hand.

Asuka herself is a good main character, powerful in combat but mentally fragile, simultaneously emotionally supported and dragged down by her obsessed partner, struggling to avoid being crushed by the events forced on her and the expectations the rest of the world has of her as Rapture. Despite her absolutely brutal fighting style and the awful things she has to regularly face, she's a surprisingly normal girl under the PTSD and anxiety, but she can't stay like that. Her evil counterpart the Brigadier is an obvious mirror of what she could turn into if she doesn't dig her heels in at some point.

The series is a breath of fresh air in some ways. Despite all the military trappings and the presence of a karate-expert character, Fukami doesn't shy away from painting the JSDF officers as morally-bankrupt, Japanese police officials as shady and self-serving, and Ms. Karate has no real advantage over the other characters and their foreign martial styles. M-squad, Asuka's support team, are a quartet of supposedly elite JSDF...with pretty much zero actual combat experience. Their team leader is selected on the basis that he has a track record of being a dick. The story itself begins 3 years after the war against the Disas was won, because we've already seen HEROES KILL BIG BAD a hundred times already. Asuka is a remorseless badass on the field of battle, but drops that tight-focus mask once off it. Support-focused Kurumi lacks that implacable killer edge in battle, but wears the mask as she attends her other duties instead. The consequences of battle are not neatly confined to the battlefield but spill over into civilian life, for both the protagonist and the world at large.

Worldbuilding is strong. The author obviously put a lot of thought into the political landscape and the changes that a costly, difficult global war would bring. Child soldiers and manipulation of the new breed of magically-inclined humans, corruption, black market magical trades between worlds, differing approaches to the new military climate and inter-factional backstabbing all flow naturally from the realistic approach, with Fukami gleefully using black humor and laying everything on thickly to prevent the overall tone spiralling into depressing grimness.

Oh yeah, and it's full of lesbians.

Cliche, but cliche done well.
by DarrisonSaber
December 2nd, 2017, 10:50pm
Rating: N/A
The manga brings nothing particularly new to the table, but it certainly executes it's ideas really well. Would recommend for people who wants to read a more serious take on the magical girl genre.
Was this comment useful?  Yes