Login to add items to your list, keep track of your progress, and rate series!
Description
The story centers around Yuna and Akari who have two very different views of love: Yuna is someone who sees love as a dream and Akari is someone who is very realistic about her romance choices. Meanwhile, there are two boys, Kazuomi and Rio, who also have different views of love: Kazuomi’s an airhead and doesn't understand the concept of love while Rio grabs the opportunity when confessed to as long as the girl looks cute. 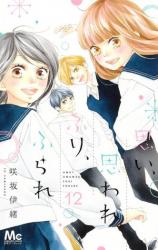 Lovely until halfway when the focus shifted to the second couple.
by F0rcefi3ld
October 23rd, 2021, 9:06am
Rating: 7.5  / 10.0
Nothing new but fits it's genre and the pairing of Yuna and Rio was great to follow from beginning to end.

Character development went unexpected. My two favorite characters initially Akari and Kazuomi eventually fell behind my growing appreciation of Yuna and Rio. The downhill interest in Akari x Kazuomi then shifted to complete frustration and dislike towards their characters and pairing. Yuna defied my expectations.

While I enjoyed the girls' friendship, I couldn't help feeling that it was cute but shallow. Akari shared more with Kazuomi throughout the story than her supposed best friend.
Was this comment useful?  Yes

In terms of story, I thought it was okay. I think I would have enjoyed this more when I was younger. My main issue is that this is a pure romance, although I guess I knew that going in. The characters don't even really have hobbies and even though it's in a school setting, they barely study or do anything school related. Every single conversation is about romance. I enjoy it more when that isn't the sole focus of a story.

Yuna, I will say, was a sweetheart. I enjoyed her part of the story the most. Kazu, on the other hand, was my least favorite - he had no presence.

I did enjoy the friendship between Yuna and Akari. It's always nice to see two best friends bonding and just being there for each other.

Good manga
by t-ramisu
January 6th, 2021, 9:47pm
Rating: N/A
Art is gorgeous. Story reminds me a bit of Nana's beginning, albeit watered down.

Positives:
- I really enjoyed seeing the friendship between the 2 female leads develop
- Cute characters overall. The mangaka knows how to develop those cute, intimate moments between the characters.
- Lead characters are extremely likeable. Had a good mix of being able to think for themselves but also follow their heart (esp. Yuna).

Negatives:
- The story starts dragging towards the end. The pacing fell apart here since
Spoiler (mouse over to view)
you have a few chapters of the couples being lovey-dovey then the final conflict happened. But then some parts of the final conflict such as Rio's resolution and his reasoning felt rushed (the story around his reason took maybe 1 or 2 chapters).
-
Spoiler (mouse over to view)
Akari and Kazu's relationship were pretty frustrating. You can write dense characters that are cute, smart, relatable, and the reader will still enjoy reading about them. Just because they are dense does not mean they have to be frustrating.
-
Spoiler (mouse over to view)
Akari's ex boyfriend and that love triangle was SO forced. This manga had some cliches up until now, but did we REALLY need this cliche? It feels like the mangaka wanted to spice things up and throw in some suspense but it did not really work here.
- I feel like her intention was to develop two parallel relationships and give equal treatment to both. I personally heavily leaned towards one relationship over the other due to the reasons outlined above. So if that was really the mangaka's intention - to be fair to both relationships and not favor the other - then I do not think it was effective.

So overall, I enjoyed this manga. Do I think it was deserving of an anime adaptation and a live action? No. Shoujo manga are a dime a dozen, and honestly if this did not have Sakisaka Io's name on it, it never would have gotten popular. I've read a lot of shoujo manga. I've also read Strobe Edge and Ao Haru Ride. All in all I feel this is a good manga but it feels like a copy paste of the same setting as Strobe Edge and Ao Haru Ride. Take out the
Spoiler (mouse over to view)
love triangles, angst, ex girlfriends from the other two manga, and add in two female leads, make one of the male leads super dense, and that random wild twist at the end
-- now you have this manga. In the future, I would like to see the mangaka explore other settings outside of high school and add more interesting storylines. Right now it feels like a one trick pony - and an above average one at that.
Was this comment useful?  Yes

I like it better than
by Akatsubaki
July 29th, 2017, 3:38pm
Rating: N/A
Strobe Edge and Ao Haru Ride. There are some recurring themes on Sakisaka Io's works, such as rejected confessions (while it becomes mutual later or already mutual but some stupid reasons somehow make them rejected the other person), self-sacrificing males, divorced parents. But overall, out of those three, this series has better execution in terms of story. You can feel the characters development and the story isn't just revolved around love, but also friendship.
Was this comment useful?  Yes

i think maybe people didn't give the story a chance before rating it -- on forums, i've seen people complaining about yuna, the sweet, shy, timid heroine... but she undergoes SO MUCH character development, naturally and believably but still quickly. if you thought she was being annoying, she grows tremendously. that's the whole point of her character arc. and i LOVE LOVE LOVE LOVE LOVE yuna anyway... she's my favorite character by far, growing from a scared little girl to a brave and honest and kind woman.

and maybe the love square will throw people off, but really... it's not drama and misunderstandings or a gimmicky cheap trick for suspense. it's characters who communicate with each other and are honest and kind... who happen to start off in the manga a bit tied up in their affections. but it's not one of those "oh, who will they end up with?!" kinds of melodramatic love triangles. the couples form very quickly, even if they don't actually get together quickly -- you know who's supposed to be with who and the manga is clear on that.

i guess what i'm saying is i really don't understand why this doesn't have excellent reviews. trust in the character development, stick with it, and you'll find it's warm and wonderful and sweet and romantic and just... soooo gooooood. i love it. definitely recommend, especially if you love sakisaka io's other works.

Cute
by crinnge
October 17th, 2016, 8:34am
Rating: 9.0  / 10.0
What's better than a love triangle? A love square! As one of the commentaries below pointed out, there are definite concrete relationships already plotted out, so it's all good if you don't mind being able to read into who's going to end up with who.

The other notable thing; the best quality happening in this manga so far is the character development. I really like Yuna, who is designed as what would normally look at lot like a background character.
Was this comment useful?  Yes

Why does this series getting (1+) ratings? It's not extremely bad.
It has ups and down but I do think this is by far Sakisaka's better work.

Pros:
- The pace for example is nice, the character development is also good and evident.
(although on Rio's part, I hope Sakisaka fix this)
- Distinct characters and couples. A story doesn't always have to be about Love triangles, it's getting tiresome. But OmoFu has an obvious couple as the end game, it's not bad, in fact what we are seeing is how it will develop.
- There's no extremely heavy baggage. There is drama but it's solve in a pace where it doesn't drag on, the only mystery character as of now is Kazu.

Cons:
- Two couples, meaning viewers might like the other one better. But both can be likeable.
- Few chapters are out since this is slow paced yet paced well (haha) we have to wait for further development (for a monthly manga).
- Sometimes cliché but not terrible.

Give it a chance.
Was this comment useful?  Yes

As expected
by forsakendoll
September 11th, 2015, 10:19am
Rating: 10.0  / 10.0
From the author who brought us Strobe Edge, Ao Haru Ride and etc. If you like Sakisaka sensei's previous works, then you'll surely like this one too. Expect great art, excellent story telling, heart squeezing moments, lovable and non stereotyped characters. Experience different love views, see various POVs through her manga, I really love how she draws each character's expressions and emotions. This is one enjoyable read! Instant favorite!