Login to add items to your list, keep track of your progress, and rate series!
Description
A young man set forth to avenge his master, a once powerful martial artist who was betrayed by his own men and barely escaped with his life. Armed with his master's supreme martial art techniques, he is ready to bring terror and wreak havoc among the murim. But before he even got started, he learns that the ones who had betrayed his master are already dead... Erm, so what happens now? 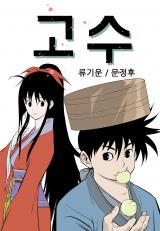 Love the comment before mine, thanks LordOfTheThunder for backing up the MC and the plot progression.

Notice how everyone is either a 10, or a lowish score? You will either love and appreciate this webtoon, or misunderstand and miss the point of it.

GOSU is quality to those who can see it. The quality of this webtoon is the same as Tower of God (or ToG is like GOSU). It's that good.

Ignore the edgelords. The protagonist is great.
by LordOfTheThunder
July 14th, 2021, 11:20pm
Rating: 10.0  / 10.0
Writing this because I see people complaining everywhere that the protag is a "p*ssy" and want to clear that up.

The protagonist's character progression is amazing. He lived a peaceful life growing up so it would make no sense if he ran around murdering everything in his path immediately unless he's a total psycho. There is nothing unique about being a horrible person; you can just read xianxia if you want to see that and you can easily find enough to read until you're sick of it.

Instead of just being a sociopath, the protagonist is a person with a good heart who is slowly dragged into the violence of the murim. For the first part of the story, his power is enough to allow him to keep his hands relatively clean, but as he meets stronger enemies it gets harder for him and he's forced to adjust psychologically.

I don't know why tf someone even said he acts like "with great power comes great responsibility" because he does nothing of the sort. The protagonist thinks everyone has the responsibility to not be a !@#$ing serial killer regardless of power level and that's entirely reasonable. He personally helps people when he wants to, which is often, because he comes off as a genuinely nice person, but he puts his personal goals first (which are not nice at all). That is not something to write off, because the reason a lot of generic "good" protagonists are annoying is that they're actually unsympathetic hypocrites.

And no, him being a nice person does not make him "boring" because he is constantly forced by the plot to have to make decisions where he can't accomplish his goals while being "soft". The internal struggle and resulting brutality is much more interesting to watch than "hurr durr I instantly kill everything that pisses me off because I'm a reincarnated dragon bloodline asura god of destruction". The people complaining that he's not OP enough are probably in the middle of their isekai addiction phase.

As for the landscape panels: They are amazingly detailed to the point where the artist is some sort of miracle worker for being able to draw so many of them in a week. They're just plain gorgeous. The fights are cool and the humor is good. The side characters are good, too. Overall, one of my top 3 webtoons.

Overrated
by tiankioo
July 17th, 2020, 7:00am
Rating: 6.0  / 10.0
the whole premise of the MC not killing anyone is kind of annoying because most of them end up getting killed off by the author either way. Shounen tag needs to be removed or changed to seinen. This manhwa has no issue killing off innocent people, even a village gets massacred. Definitely not material for kids.

The fights are not good. Uses too many explosions, and most of the panels are just landscape getting torn up. There isn't much actual fighting going on, just things like whirwinds, or stuff like that. It doesn't deserve to be classified as a martial arts manhwa.

Really enjoy this
by Suxinn
June 14th, 2020, 1:09am
Rating: 9.2  / 10.0
I really like Gosu, and I think it's one of the few "pure" martial arts manhwas I enjoy. It really reminds me of why I like this genre, even as the genre itself has become oversaturated with endless fights and powerups.

I think what sets Gosu apart from its ilk is, as another commenter noted, the real opponent for our protagonist isn't the other martial artists, it's himself. The webtoon is ostensibly about him taking revenge on his master's killers, but it's about a lot more than that: it's about a disciple who's always loved his kind and benevolent master realizing that his master had actually done some truly evil things and that his killers might not be good people, but actually had a good reason to commit that one particular murder. And these attempts to reconcile these two disparate images of his master are really eloquently and neatly interspersed between the scenes of really epic and fun-to-watch martial arts fighting.

Gosu also gets extra bonus points for having side female characters who are also martial artists and can hold their own against most men, and who aren't just there to act as the love interest for a dude. Especially Yerin, who, in any other manga, would've been a typical damsel-in-distress, but in this she's actually extremely powerful and never needs any saving from Ryong. In fact, all she really needs is a delivery boy, so Ryong should probably stop ditching work and start delivering some steamed buns again!
Was this comment useful?  Yes

Extremely engaging.
by CriminallySane
May 6th, 2019, 6:18pm
Rating: 10.0  / 10.0
A martial arts manhwa based on the typical protagonist facing tougher and tougher enemies - except it isn't. As you progress through the story, you find that Gang's struggle isn't with the enemy in front of him, but one in his own mind. He's only just come out of his cave and into the world, and we get to see how he evolves as he discovers more and more of that world.
What more is there? Beautiful artwork, and an intriguing cast no less interesting than the protagonist himself.
Was this comment useful?  Yes

Wasn't as funny as Yongbi. Plot seems.... rather generic? At least it didn't have the same level of plot twists Yongbi had. I would of liked to see some more characters from Yongbi and how they turned out over the years, but as far as I could tell, this is pretty much a separate story with very little relations to the previous.

While not as exciting as Yongbi, it seems interesting enough for me to want to read more.
Was this comment useful?  Yes

Was expecting something different but it fell into the usual cliche tropes
by deathcoy
December 15th, 2018, 9:14pm
Rating: 6.0  / 10.0
I was expecting the story to be about an MC being a crouching tiger hidden dragon, an overkill monster in retirement, something different from all the stuff we see nowadays but after a few arcs, it fell victim to the usual shounen cliche tropes.

A few arcs down the line we start to see MC winning battles only by a hair's breathe, the common power leveling progression seen in shounen. Author also pulled the usual, with great power comes great responsibility, the good guy and justice shenanigans, refusing to kill despite being in a Murim world where its a dog eats dog world. Up to the latest chapter, MC is still struggling with going all out, fighting and killing, law of the jungle style but instead chose restraining and being the good guy batman. Frankly it gets annoying and stale.

If theres any budding authors out there reading this, i would like to remind you that creating such a character will make him a unique figure in your story setting. Your character will stand out in the world and even might seem cool but that also means you're making your main character the same as 90% of the other MCs out there. To readers, your MC is the same shit but just a different read, they are NOT unique or interesting!!!

First season's been good
by PZcolo
September 4th, 2017, 1:12pm
Rating: 7.0  / 10.0
After finishing the 1st season, I found it to be quite good. It starts of heavy on the comedy side and I actually found it funny for a change, also, the timing for the comedy is well chosen, the author knows when to crack a joke and when to be completely serious.
Later on it looses on the comedy side and centers more in the story, which is a bit lackluster, a youth that was risen up by the previous evil overlord to take vengence for him but he's sworn not to kill, a weird combo. It also gets heavy on the action and fights, and while the art is excellent, the fights are mostly things exploding, save for some parts. And some fights, one in particular goes beyond the fantasy realm into the ridiculous one.
Last, the chars are quite interesting and there are some cameos from Yong Bi and some connections here and there. MC is kind of a stoic good guy that doesn't say much, and many enemies have rich backgrounds. At the same time, some are quite annoying, like the FL.
All in all it's an entertaining mix of martial arts action and comedy.

unfortune they usually have some great female side character with strong personality which hard to find at another genres, damn it @@.
Was this comment useful?  Yes