Login to add items to your list, keep track of your progress, and rate series!
Description
From Forever More:
First-year high school student Yuka happens to see his amazingly handsome neighbor kissing another man. However, he learns that the handsome neighbor is his math teacher. Having fallen in love at first sight, Yuka struggles to attract Gotou's attention, but Gotou restrains him with an, "I have no interest in kids." 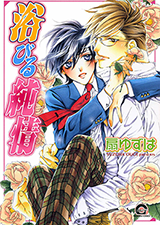 ... and then the art was not my cup of tea in general. I had so much fun reading all of it though, I seriously can't even begin to grasp what the hell got into my head, haha. I particularly liked Gotou's overall presence and attitude towards the smallest as well the biggest things, such as:

Spoiler (mouse over to view)
the encounter with the Mother and the almost-rape situation. It was interesting for a comedy

Of course it would have been nice to see some more development and characterization (and less plot holes) but in the end I think the balance between lighthearted humour and drama was well thought out, even if some of the more conflicting elements of the plot remained a little glossed over. For instance, I would have liked it better if we had less smut and more "moral confrontation" of the fact this is a student-teacher relationship but hey... that is why I generally don't like that kind of plot to begin with. For a change, this one did not make me gag or cringe or put it down immediately after the introduction of the main characters. Some moments of it were genuinely heartwarming and the comedy is clean.

Now, just a word of advice for all the young folk with no dreams out there: "do become a public servant" haa loved it.

<3
by ManaholicMage
January 20th, 2015, 12:35pm
Rating: N/A
I loved the story. The art was pretty and it did't end abruptly. But something is bugging me though. I read Abiru Junjou and Star na Koi, and supposedly Star na Koi is supposedly a side story. In what way? I didn't recognize any characters of Abiru Junjou in Star na Koi. Any help would be much appreciated. :3
Was this comment useful?  Yes

But it didn't meet a lot of my expectations. I wanted a little something more because the beginning hinted at a great story (although you couldn't really expect that with just 4-5 chapters, I guess). The author fell short of rounding everything up nicely.

Spoiler (mouse over to view)
When the senpai was introduced, I thought his character would be the cliche villain who took advantage of the uke and then the seme came to save the day. I was wrong, and I'm happy to know that the senpai is truly a good person. Therefore. you just feel bad for him at the end. The scene that showed him getting stood up by the uke didn't make me rejoice for the mains finally getting together. It made me pity the senpai.

The girls who bullied the uke gave up really quickly even though most of them have hated him since elementary/middle school. And will Gotou ever find out about the senpai's role in stopping the bullies from their continued harassment of Yuka? Surprisingly, Gotou did not have anything to do with that. Why did Yuka's mother look at him during the funeral? How was the guardianship of Yuka dealt with after his grandmother's death? It just skimmed past that part.

Another thing I didn't like was the fact that Yuka and Gotou's relationship seems to be blatantly open (sort of at school) and especially in the neighborhood, as if they didn't know or care they were in a dangerous relationship that would compromise Gotou's position both at school and the neighborhood that Yuka's grandmother previously was the head of the neighborhood association. None of that obvious fear was hinted in the story at all, actually. Disappointing especially when the student-teacher relationship was a part of the story. I know that aspect of such a relationship have been dealt with many times over, but if you're going to use that setting then you have to make it believable.

The problem (but also the great thing) with yaois is that they are too short.
Was this comment useful?  Yes

I actually teared up at some moments like his mother and the whole "don't look at me" thing. The kid's innocence gets to you.

LOL
by sandyatthebeach1
July 11th, 2012, 11:18am
Rating: N/A
I was really surprised when I found out this manga has really hilarious humor in it! Its really good for something well-balanced- funny, sweet, good art, with bits of sadness mixed in. Nothing groundbreaking... But I laughed pretty hard at some parts haha. Recommended!

This was such a pleasant surprise! It's a very deep, moving story!
The student-teacher relationship is well told and not rushed like you know it from many yaoi manga where they just jump right into bed with each other.
Instead, the romance slowly builds up between the characters and you get to feel the tension and sparks.
I often have problems liking characters in student-teacher yaoi because it ends up feeling too forced, or there's abuse involved, but here, both characters are very well thought out and portrayed very lovably.
While it is lovingly romantic on the outside, the darker background topics just add incredibly well to the dramatic story-flow.
Bullying, the mother having a new family and not wanting her child, being alone, being blamed for things in the past and worrying about the grandmother - the only person who cared for him - who is now in hospital.... Yuka has a very hard and sad life, but he's still trying to be cheerful and happy every day.

The art is gorgeous, the story very deep and captivating and the characters all together extremely lovable! There's drama, jealousy and it's sexy, what more could you want?
It also made me cry!
Was this comment useful?  Yes

Good
by Serendipity_
January 13th, 2012, 9:32am
Rating: 9.0  / 10.0
Probably the best you can get by Ougi Yuzuha, and I´ve almost read all of her works.
I loved the story, it had more depth to it than I thought and the Characters was likeable. Not annoying. Also, the sidestory in chapter 5 was good too, although I would´ve liked more development on that one.

This definitly belongs to one of my favorites by Ougi and it could´ve been even better if the author decided to make a sequel. Recommended.

already forgot the plot, but i liked it
by tekiteki
November 5th, 2011, 11:16am
Rating: 8.0  / 10.0
For me, this is one of those stories, that I forget the next day after reading. But I remember, it has a good *smut* and funny plot, cute characters, so i had read it at a stretch.
Other stories from the author (Ougi Yuzuha) are similiar in genre with that one. So, if you liked it - try the rest manga from her. Personally I like them all.
Was this comment useful?  Yes

LOL Great :D
by mlat26
September 16th, 2011, 4:40pm
Rating: 10.0  / 10.0
Really good manga, I enjoyed every bit of it, laughed a lot, cried a bit, I recommend it ^-^ and
Spoiler (mouse over to view)
lollllll the "semen comes out of your nose" part buahaha I laughed so hard, and yeah men have sex by rubbing their noses together XDXDXD rofllll such a cute and innocent uke <3 I hated all those mean girls that bullied him and that psycho teacher D: I love when the semes are mega hot looking :3 eye candy is always good ;D Best phrase in the history of manga "Listen up. When you become a man like me and you feel good, semen comes out of your nose." Thats a manly man for you buahaha XD
Happy reading ^-^

I love this manga so much! Gotou-sensei...mmm, sexy. And Yuka -- adorable. I gave this a 10/10 because I love the art, the characters, and i think the storyline was, 'cuse me is, greatness! It's cute but it has it's serious moments as well. I liked how you see both point of views; and hell, i'm a fan of a jealous seme. X3 if you haven't read this, your missing out!