Login to add items to your list, keep track of your progress, and rate series!
Description
Fuyuzora Kogarashi has spirit abilities, and has been possessed by ghosts since he was a kid. This has caused a lot of trouble in his life, but now he has learned to fight back against the evil spirits! Unfortunately, he's now homeless and hoping for a happier, more normal, high school life. In his search for housing, he's introduced to a very cheap boarding house called Yuragi-sou, which was formerly a popular hot springs inn. It's so cheap because the house is haunted by the spirit of a high school student whose corpse was found there.

Kogarashi doesn't think this is going to be a problem ... More...
Fuyuzora Kogarashi has spirit abilities, and has been possessed by ghosts since he was a kid. This has caused a lot of trouble in his life, but now he has learned to fight back against the evil spirits! Unfortunately, he's now homeless and hoping for a happier, more normal, high school life. In his search for housing, he's introduced to a very cheap boarding house called Yuragi-sou, which was formerly a popular hot springs inn. It's so cheap because the house is haunted by the spirit of a high school student whose corpse was found there.

Kogarashi doesn't think this is going to be a problem for him, and the rest of the house's tenants appear to be sexy women. While relaxing in the hot springs, though, he finds there is an issue with his ghost-banishing plan; Yuragi-sou's ghost is a 16-year-old girl named Yuna, who lives in his room. Kogarashi has no desire to hurt a ghost girl, and instead he ends up agreeing to help her to figure out her unfinished business. That way, she can move onto the afterlife before turning evil and falling into hell. Once it is clear that he is fine with Yuna, the other tenants began to reveal their own supernatural secrets and it becomes obvious that Kogarashi's life in Yuragi-sou is going to be far from ordinary! Less... 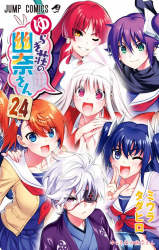 Note: You must be logged in to update information on this page.
Forum Posts Click to view the forum
Yuuna and the Haunted Hot Springs Manga Ends, Confirms New OVA
over 2 years ago

To love ru in a love hina setting with a somewhat different mc
by Seregosa
January 3rd, 2018, 7:03pm
Rating: 6.0  / 10.0
After reading all the 92 now released chapters I am now pretty fed up with this manga thanks to the author, despite liking it pretty much at the start. Which isn't hard to guess if you consider what you get here. It's exactly like to love ru, only set in a setting similar to love hina but with a few supernatural creatures and a main character that has some balls and is somewhat reliable+OP(however still having annoying quirks like not being able to punch females and having a huge weakness where he can't do anything at all against transformation magic used on himself, which makes him completely helpless when the story calls for it).

The jokes and romance is pretty much exactly like to love ru, with the same boring and overused-until-you-puke lucky pervert situations that he gets himself into as some form of comedy from hell. The romance is also utterly horrible. As if that wasn't enough, there's enough plot holes or logical fallacies to make a huge swiss cheese. The timeline doesn't add up and the author often ignores his own settings.

All in all, it feels like I've read all these situations and I get a horrible sense of deja-vu because to love ru was so damn similar. I mean, it doesn't even matter that the mc is OP since he refuses to punch girls even when they're cutting you with swords and he turns worthless if the situation requires it. I especially hate moments when he acts as if he's a normal human, such as not being able to do something he should obviously be able to, or struggling to do something that should be exceedingly simple.

As the girls became self-aware of their feelings towards the mc, it became even worse and the quality dropped to hell, the fanservice is everywhere and every joke seems to include nudity and fondling. It ceased being funny and started to become more annoying than anything.

Do I recommend that you read this? If you loved to-love ru and couldn't get enough of the "lucky pervert" gags that seemingly defied time and space and kept on reading to the end despite it getting worse and worse, then you're going to enjoy this. It's the same, but in another setting. I personally don't think I want to read further even if I enjoyed some parts of it and like a few characters. The two girls that seems to be the "main" ones are even pretty low on my rankings, around 7-8th, while the good girls doesn't have that many appearances.

Alternatively, you can read this until the girls become self-aware of their love for the mc, with is about 50 chapters or something, that's when the shit hits the fan and it gets a drop in quality in exchange for more lucky pervert situations and ramblings about romance and feelings which you couldn't care less about.

Actually, I would be lying if I said I didn't find some parts funny later on, I did enjoy reading it a lot when it was good, but the thing is that a lot of annoying stuff and situations pop up that distracts me from enjoying the good parts and you get sick of the same lucky pervert jokes being excessively used. Maybe you're one of those people that can filter out stuff mentally and not get affected by bad writing at certain parts, then you could probably enjoy this far more than me who gets distracted and by stuff I find annoying and bad romance.

Much better than many other harem slice of life
by Lyrad
November 26th, 2017, 7:56pm
Rating: 10.0  / 10.0
In many harem slice of life mangas, there's gotta be a scene where the MC ended up in a sexually weird position either accidental or intentional.... and in those scenes, I bet there's gotta be at least one girl who will beat up the MC despite knowing that it isn't his fault.

Well the first few chapters I read this, I was turned off by this exact scene that happened in this manga, however, to my pleasant surprise, the girls actually grow some goddamn common sense. In this manga's first few chapters, there's always one girl who blames him for being in a weird position with other girls and beat him up, but as the series goes on, she stops beating and blaming him because she knows that it's not his fault, and then there's actually few scenes where she IMMEDIATELY GUESSES THAT IT'S ANOTHER GIRL'S FAULT AND NOT HIM, and then blaming that other girl. That scene was so damn refreshing to me.

And that's not the only thing that made this manga better, in many harem manga, I feel that the MC doesn't actually deserve the girls because he has basically zero qualities beside being a nice person. This MC is actually a very capable person and deserve some respect.
Was this comment useful?  Yes

Very good new ecchi/harem series
by naruto6302
May 6th, 2017, 5:07pm
Rating: 10.0  / 10.0
basically To-Love-Ru with supernatural theme, which is not a bad thing and the main char is OP and not dense/dumb as some main char in this genre, he's quite proactive. So for those who enjoy ecchi/harem series, this should be your cup of tea
Was this comment useful?  Yes

It's a fake-Harem Manga
by Hoodspirit
January 24th, 2017, 4:23am
Rating: N/A
If you are interested in it, it's most likely because of the Harem theme.
It is a fake-Harem though. Even nearly 50 chapters in and three of the people at the inn had only one focus chapter. The cast is big, but outside of the Main Heroine (the Yuuna from the title) not many of them get attention. Even those with more than one chapter for them, are very one dimensional. In most chapters, whatever happened in it, at the end it somehow shifts back to the Main Heroine.
This is even acknowledged by a love interest outside of the inn. She isn't bothered by anyone else around him except when it comes Yuuna.
If you look for a Harem setting look elsewhere.

If you are one of those interested in the supernatural aspect of this Manga, you will enjoy the beginning. You can stop fairly early though as it hasn't been an important part of the manga for a long time. It really is a shame thatt it is not explored more.

As for a story... you will have to look really hard to get a glimpse of it. Sometimes it flashes up shortly, but barely goes becond the reminder that Yuuna is a ghost and a happy end is not expected by the people in-universe.
There are sometimes three chapters about the same theme/event, but mostly it's just chapter showing how the people from the inn have fun.
Was this comment useful?  Yes

Standard harem comedy mixed with supernatural themes.
by drunkguy
May 30th, 2016, 7:11am
Rating: 8.0  / 10.0
Not much to say here. Think Love Hina with magical creatures and an MC who isn't a wuss. The art is alright and there's a lot of fanservice. It is funny but not that memorable. It's something to read when you have nothing better to do.
Was this comment useful?  Yes

I don't know how to feel about this
by Artimidorus
April 30th, 2016, 9:29am
Rating: N/A
First: The art is good, that is what gives it the higher score.
Second: The story is moving really fast, but is almost nothing but fan service. The actual "story" after 4 chapters would probably only be about 3 pages.

Third: This is pretty blatantly a copy of Love Hina, but with more ghosts/demons. On one hand, I loved Love Hina, and own several sets of Ken Akamatsu's work - and always enjoy going back and re-reading Love Hina and Negima (not so much A.I. Love You). Seeing it in a slightly new form is good, but... such an obvious copy is a bit rough. So I'll give it time to see if it changes things up a bit, but I hope it starts to come into it's own.
Was this comment useful?  Yes