Login to add items to your list, keep track of your progress, and rate series!
Description
Nakano-san is a high school girl who can look into people's minds. Because of that, she finds out that the mind of the popular Toda-kun is full of wild fantasies about her! 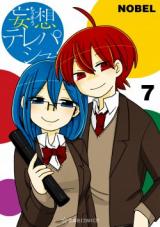 We had to wait till the epilogue for some stuff but it held out better than tomochan, given the telepathy twist they gave it. The first chapters are the best, but you don't really miss anything if you skip to the last chapters and see the conclusion if you get impatient.

Though given the male MC's personality it was for the better...

Great! Until the end.
by 5chickens
March 11th, 2022, 1:55am
Rating: 8.0  / 10.0
Incredibly good, a paradigm for how a daily 4koma should be written. Every single strip is satisfying, either as a good joke or a nice step forward for the story. The highlight of the whole thing isn't even the romance, but the friendship between Aya and Mana and how it develops both of their characters. It's a great coming-of-age story, focused on a girl who really hasn't had any confidence or social skills until the beginning, so you basically get to see her start from scratch and follow her entire growth. It's SO GOOD.......

Until the author seemed to burn out or something, took multiple very long hiatuses, and threw together an unsatisfying ending.

DO read it. But curb your expectations once you get to the last volume. Unfortunately the ending doesn't do the rest of it justice. But the reason people are upset with the end is because this is a great enough comic to deserve and to create expectations for a fantastic ending. We're sad because it deserved better, please read it for that reason.
Was this comment useful?  Yes

Ending was aight
by hoBRO
December 12th, 2020, 5:41pm
Rating: 8.0  / 10.0
Spoiler (mouse over to view)
I mean, he found out at the extra chapters that she could read his mind and yet even knowing he's a pervert, she still went out with him was a funny end but-- I wanted to see them at least kiss once or something for real.
Funny. I read till the end.
Was this comment useful?  Yes

I read this in small increments
by Utsukushii Yume
May 3rd, 2020, 1:21pm
Rating: 6.0  / 10.0
I would burn out reading this from start to finish. I find I appreciate it more reading it in small increments. I do appreciate that they explore the feelings of someone who can read minds, even discussing the guilt someone might feel for having such an ability. I also enjoy the FL friend, she grows nicely without losing her core personality which I liked.

Read it to pass time and for humour, but
Spoiler (mouse over to view)
dont expect them to become a couple.
Was this comment useful?  Yes

Fun content, BOTCHED ENDING
by Felo1
April 18th, 2020, 9:10pm
Rating: N/A
The author did a good job of stablishing an interesting take on telepathy and relationships but
Spoiler (mouse over to view)
Just up and decided to end the webmanga right after the main characters start a relationship, when you're most expecting of him developing how would the MC manage her powers regarding her daily interactions with Toda, and wraps it all up with a gag instead. A GAG, I AM STILL IN DISBELIEF

updates
by IkChiseVliegen
June 23rd, 2017, 2:16am
Rating: 9.0  / 10.0
The whole ''one update a day'' thing they've got going on (which btw isn't even steady) kind of bothers me, it'd rather have like a seven chapter update once a wekk but even then this maga kicks balls. Srsly. it's fucking great.
Was this comment useful?  Yes

Like a fish out of the water (?)
by melquiades
April 28th, 2017, 7:13pm
Rating: N/A
There is something i cannot understand about the main girl character, It is as if a she had no previous experience with her power even though she hasn't get it recently; that is the biggest gripe i have with this manga. It seems as if she have never seen inside the mind of any regular man before... not to say a regular teenager. That she can be so flustered by knowing that they are having dirty thoughts. A man is always thinking about that stuff, it is almost automatic when looking at a well endowed/pretty girl, it is part of what you would normally call attraction. Or is it that she had never been the recipient of those thoughts before or is it because the MC is just plain creepy? What a man can imagine doing to a girl he is attracted to would most certainly be creepy for any girl that finds about it, but from thinking to doing there is a long gap, and that gap normally separates rapist from regular people.
Or would it be that the mangaka is a girl and does not know how horny men can get to be?
But i guess the reaction of the girl to the MC shenanigans is what makes this manga funny in the first place, it is just a disconnection between what experience can do to the attitude of a person and the current state of events in the manga what i don't like.

Now the plot has introduced a character that defies any regular preconception just to be the antagonist of the male MC.
I was reading it just because it was funny, now i'm considering if i should keep reading it at all.

EDIT: I am glad i put up with the series, the plot develops in a way that sorta makes sense.

Kinda cute, maybe?
by skyplate
March 27th, 2017, 6:18pm
Rating: 10.0  / 10.0
We have a kind hearted introverted MC that somehow got the most perfect guy at her school love. He's always have perverted though about MC, so the MC kinda creeped out by him (who's not?), but over the time, she's trying to open her heart and find that boy is not too bad. This is not only about their rom-com, but friendship too. Give it a try if you like Tomo-chan!
Was this comment useful?  Yes