Login to add items to your list, keep track of your progress, and rate series!
Description
From DMP:

Why is Toru Kouno receiving such an overly warm welcome at his new all boy's school? He has yet to discover the secret system called "Hime (Princess)" in effect at the school. Boys who are chosen have to dress up as a girl in every school event! Little does Kouno know that he would be the chosen one... 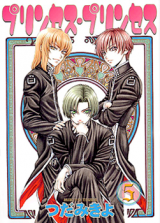 Note: You must be logged in to update information on this page.
Forum Posts Click to view the forum
'The Day of Revolution' a side story?
over 13 years ago

my childhood
by Miachann
October 11th, 2020, 2:17pm
Rating: 10.0  / 10.0
hey this is my childhood, at first i dont remember it, the cover its familiar but i dont remember this manga, and at first i was hestitate- Girl who Crosdressing as boy not my favorite, but then i give this a chance and I do not regrets it, i love it, and at some chapter i do remember read this manga back then when i was kid- but still despite of that, i love this manga, the plot, the comedy the chara its very good
Was this comment useful?  Yes

Trope-defying
by Nirachu
May 25th, 2014, 6:36pm
Rating: 10.0  / 10.0
This series has some of the best bromance ever, along with well-developed characters that don't fit into cookie-cutter tropes, an easygoing, humorous tone laced with some surprisingly complex character development, and a perfectly well-defined, not too long nor short length to the story. Princess Princess doesn't fit cleanly into a genre: it's neither shoujo, slice of life or shounen-ai, but rather, it draws slight elements from a variety of genres in the best way possible.

AMAZING!
by xRosex
July 28th, 2011, 1:37pm
Rating: 10.0  / 10.0
This is amazing series! It's a funny and cute male bonding series!
At first when I came across this manga I thought it was a Shounen Ai, as I kept reading I was just sitting there thinking "When's the romance going to start" I later realized it was never going to but I don't regret reading this one bit!
It's funny, sweet, heartwarming, and good at keeping you relaxed with its steady pace! Never rushed and never slow! If you are looking for a great series to calm down with this is a good story for you!
Was this comment useful?  Yes

Despite any BL tags, I don't really see any of it - and that's actually what I like the most about this manga. Too often there's this whole... sparkly, lovey dovey effect, and it gets old. The boys in Princess Princess are -boys-: girl-liking, down-to-earth, lets-just-get-this-over-with boys. I was a little afraid it was going to devolve into a swoony, sparkly shoujo, but it sets and keeps a firm foundation of hilarious guy-hood.
Was this comment useful?  Yes

But for some unknown reason I picked this series up...and actually enjoyed it. The characters are interesting enough and this being my first true exposure to bishonen characters I found myself doing double takes to confirm that the three main characters are actually males.
The plot/theme itself is bizzare yet disturbingly understandable and the comedy is great.
I strongly suggest you watch the anime as well if you like this series as it is absolutely hilarious. Hell I've even ordered a copy of it's sequel Princess Princess +. It's that good! Looking forward to it arriving in the mail ^_^

just for megumi
by holibelle
May 9th, 2010, 6:59am
Rating: 6.0  / 10.0
i actually read this manga because i wanted to see Megumi (The Day of Revolution). anyway, think this is a cool manga. however, this isn't actually my cup of tea. the manga is really funny and the art is quite superb. i was especially interested in seeing Mikoto. hahaha. he's such a comic relief.

awesome!!!
by xxxillusionxxx
August 27th, 2009, 8:57pm
Rating: N/A
Ok, when I first heard of this I was super hesitant. I mean, cross dressing guys in an all boys school is not really my thing, but I had nothing else to read and I'm soooo glad I picked this up!!!! It was hilarious, the artwork was nice, and I just loved the characters! Definately a must read <3
Was this comment useful?  Yes

Along with the amazing story line and surely interesting characters the art is something to die for i absolutly LOVE this mangaka and seriously use them as insperation for my own art!

I don't give a crap what other people say this manga is a work of pure greatness it has every aspect of what a good manga should hav 1. good plot 2. beautiful art 3. interesting/memorable characters 4. BL (boy love).

Honestly if i were to chose my favorite shonen-ai manga this one would seriously without a doubt tie for first (it would tie with loveless).

In my opinoin you haven't had the full shonen-ai experiance until you've read this manga thought that's just my STRONG(and well edjucated) opinion.
Was this comment useful?  Yes