Discharged from the hospital after recovering from a serious accident, music teacher Hibiki Kyousuke finds himself able to see and hear musical notes coming from the people and the world around him! As he contemplates this lasting damage (and maybe a malpractice suit against the hospital), he finds himself face-to-face with a haughty young girl decked out in frilly Gothic Lolita clothing. And when she suddenly points at him and orders him to be her servant, will Kyousuke have no choice but to dance to the little princess’s tune?! 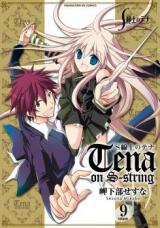 Urgh, what? I guess I'm also too old for this
by Seregosa
October 24th, 2018, 3:44pm
Rating: 4.0  / 10.0
Similarly to U-jin, I am also unable to comprehend this, according to me, garbage. People fighting with tunes, subpar comedy, a girl that bumps into the mc for no reason and treats him as a slave, a mc that somehow kinda accepts it, come on. The logic here is so flawed it's ridiculous, The melody setting is silly and stupid, but not in a funny way. The comedy misses way too hard, it's easy to see where it's trying to be funny, but it's not funny at all.

Yeah, it's a drop.
Was this comment useful?  Yes

Highly underated manga
by bloodstainx
March 21st, 2012, 1:20pm
Rating: 9.0  / 10.0
Love the art work and the story is pretty great as well. Characters are really well done and have great personalities that are just a tad bit cliche but the cliches are really done well. Highly suggest a read and check out Seishun For-get! the mangaka's latest work. One of my new favorite mangakas.
Was this comment useful?  Yes

Seinen?
by Sukets
November 9th, 2011, 7:39pm
Rating: N/A
Firstly I want to say that this is the famous "Shounen on a Seinen magazine". Somehow I read all chapters translated, but It's not an must read manga. Its pretty generic, and I agree with some people when they say that this is somewhat similar to "Zero no Tsukaima", the plot and everything.

The art is kinda acceptable, and doesn't have any charisma.

After all I'm thinking if I just read this because I'm too lazy to find a new manga to read, after all, I'm down to past 500 manga...
Was this comment useful?  Yes

Don't you dare like / dislike this for "LOLI" element, ALONE!
by kazewa
April 12th, 2011, 8:30am
Rating: 10.0  / 10.0
This manga is super great. Without a doubt it becomes my 3 top manga (at least for a long long time). I don't dislike Shakugan no Shana and Zero no Tsukaima (I like both anime actually). but for those who compared Tena on S-String with Shana and or Zero, please open your eyes. I don't really think Shana really that 'lolicon'. The same case with this manga. Yes, we can say the main heroine is a loli, but don't say the manga itself is loli. If it's about 'lolicon', imho Zero no Tsukaima is the closest to it between the three.

For whoever disliking this manga for the 'wrong reason', open you heart and try to read to at the very least the end of volume 5. You'll see the story makes sense, actually simple yet complex, actually complex yet simple, The story is progressing at a fine pace. You might think it's more of a gag manga than music / romance manga at certain early point. And you might think the story wouldn't be that much. But the story keep on progressing. Make 100 prediction about the story, and I'm sure you wouldn't get any one right It could turn serious. It could give you a sad feeling. .

Tena is rude, violent, greedy (of self glory - but changed with the flow of story), and dishonest. But still she is one interesting character. I'll clarify this first: I'm NOT a lolicon! Even still, I think she is interesting.

Kyousuke is not smart, not handsome, not really talented (though having a very very special 'note' within him). Clueless about girls' feelings toward him (though he wanted a girlfriend), like you can find in so many other main male leads. Nothing much different from your 'typical' main male leads, really. But even so, he is interesting.

My English is not that good and I'm not really good at conveying my thought into words. But even so, try to read it for it's story, it's artwork, it's characters, and all. Don't always judge the book by the cover (aka main heroine loli). You might miss a pretty, rare, good manga, you know...

LOLS
by black.rOses
July 4th, 2010, 6:26pm
Rating: N/A
At first I only wanted to read this because of the guy's love for music and see how well he grow. I didn't care about the other characters until this and that happen and for some odd reason now I'm anticipating something more from the manga. It keeps the readers wanting to know the great mystery. I just hope the love for music theme doesn't disappear overtime and become into some like fighting using music and stuff like that. (:
Was this comment useful?  Yes

ughh
by Baka Rocky
May 8th, 2010, 8:41pm
Rating: 1.0  / 10.0
Another loli master with unwilling servant manga..... Zero no tsukaima was good but this....Just pisses me off for some reason. I can't help but hate Tena and have no respect whatsoever for the guy.
Was this comment useful?  Yes

Enjoyable and entertaining
by swiftstrike
April 1st, 2010, 2:18pm
Rating: 10.0  / 10.0
comedy scenes are well used and usually add to the overall friendliness of the story (although the guy should be in danger 24/7 lol)
nice art and seemingly developing storyline.

not really ecchi at all (a few other manga's that don't have this tag - such as TWGOK have more in it)
news of the anime disappeared lol.

I'm too old for this...
by U-Jin
January 6th, 2010, 4:44pm
Rating: N/A
~Omg, i can hear sounds of things and see those sounds, and i met goth-loli that collects them and she made me her slave, and she fights with other mysterious girls by throwing 'sounds' at eachother....wtf?~

Yea, that was my first reaction, but after 'those' chapters it becomes a bit more normal. Its too soon to rate it tho. I like them romance-comedies but 'music-battles' and collecting sounds, cards, feathers, drabon balls, bokemons and other mysterious girlish things or uma's is overkill for me ... i'll wait for more chapters to check which way will this story go and rate it then~

Tags are misleading
by Darknemo2000
June 19th, 2009, 3:44am
Rating: 8.0  / 10.0
It's a nice series and interesting to read, but the tags are misleading. First of all there should be a romance tag, since it is pretty clear in later volumes that Tena develops feelings for Kyosuke, who also seems to have a soft spot for her.

And harem tag should be removed - there is no real harem - sure there are a lot of girls but they are not in love with Kyosuke or anything like that. The only one who has feelings for him is Tena and another girl, who comes later, but then it is love traingle at best, not to mention that that other girl seems to think of Kyosuke more as an older brother figure.

So yeah tags should be corrected.

Series is pretty good. Nothing outstanding but nothing bad too. And it has a loli-tsundere as amin heroine so tsundere fans may enjoy it.
Was this comment useful?  Yes