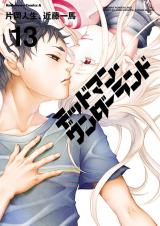 A Manga that tries really hard to make itself special but lacks the ingredients necessary to make itself unique
by Shellshock
February 20th, 2022, 11:46am
Rating: 6.0  / 10.0
There are some Spoilers in this Review. About 4 volumes or so.

Deadman Wonderland starts with a massacre of our Protagonist's class and with him being the main culprit's and Japan's incredibly questionable police force he gets the death Penalty. However in 2013 there was a big earthquake which caused 70% of Tokyo to be submerged in Water. Now to restore Japan's to its former Glory a Prison Named Deadman Wonderland which is a for profit prison. And now 10 years since the earth quake, Ganta (MC) is sent here to suffer the wrath of his consequences. He soon realizes that this prison is more than what it seems and Just how much of a circus a for Profit Prison can be.

Deadman Wonderland is pretty by the book series. MC is a nice guy. Follows girls around/vice versa. Realizes what he knows wasn't the truth. Deals with the situation where everyone wins. Rinse and repeat for some subplots and bam you got a 13 volumes series. Now don't get me wrong, Despite me stating this I didn't actually think the series was repeating itself. It always felt like the story was moving forward. Stopping to give proper breathing room. The problem are a few things but First I'd like to talk about what I liked the series.

The Art and setting of this series is fantastic. It felt like I was being sucked in another world. A lot of this can be attested to the fantastic art the series has. It really does a fantastic job. I honestly have nothing but praise for the art. Never did it feel like the author was cutting corners.

This is also one of the battle shounen series where the ecchi actually is separate from the action and the author isn't trying to shove panties and breasts into my face every 5 seconds. Characters do get occasionally sexual but more during exposition to keep me interested. And you know what? It works because I'm a red hot blooded male damn it!

The main issue I have with this series basically boils to character Depth or more importantly, the lack of it. Sure the action and art is great to look at but after a while what's the point of If I don't care about the characters. That is the main problem with Deadman wonderland. Both Shiro (FMC) and Ganta were fine as the main characters but neither of them can really carry the series. Them together was basically made in interesting enough since you partially knew where the story was going. Them alone... It just doesn't work.

This becomes a much bigger problem when you get into the last arc where the last fight is meant to be emotional rather than something bloody, violent or action heavy. Honestly the final fight scene was probably the more boring fight scene in the entire series.

Should You read this manga? Well depends. The side characters, action and story is interesting enough. But at the same time its predictable and lacks the character depth a series like Kingdom or One piece would produce.

Overall the series is enjoyable enough. I don't really have anything super bad to say about this series. But if you skip it you aren't missing much either. It just basically falls into enjoyable but forgettable zone of entertainment. 6/10.

The ending was disappointing
by YuriTachikawa
August 26th, 2020, 7:55am
Rating: 8.0  / 10.0
I really like the characters and their development as well as the story progression and pacing. The ending kind of ruined it all though to the point where it just made everything pointless. Yes, it is a tragedy, but even that can be executed within reason. Well, until the end it was a very good read with well-distributed tension and mystery.
Was this comment useful?  Yes

Really great
by Fierytia
December 20th, 2019, 4:26pm
Rating: N/A
A really well made story , nice story plot and pacing , the ending left a hole in my heart after I read this
Was this comment useful?  Yes

not quite there yet..
by Fesslie
January 8th, 2019, 4:55pm
Rating: N/A
Character development throughout the series was always brief, i dont really find any of the other characters memorable and it feels like it uses shock factor too much in bad tastes to toot

The plot was pretty interesting and made me read till the end, the story does pass by somewhat fast and it loses some touch, the one thing that I did get emotionally invested though was the relationship between Shiro and Ganta everything else was lackluster.
Was this comment useful?  Yes

The things I most prominently remember
by Gandeloft
February 4th, 2018, 9:56pm
Rating: N/A
Shiro. Like with Inori from Guilty crown(though that was much less enjoyable overall), when I think of Deadman Wonderland I remember Shiro.

To get more in depth, this manga also gave me the first (I think also the only ever still now) character who I saw as sexually frustrated/in the need of being satisfied in that manner and with her being as beautiful as she is(far from just phsyically), in my mind being the volunteer at it. Weird to type out? One dude on MAL blocked me becuase of having said that in a conversation with him. My first conversation on MAL, and he did that.
Manga updates seems to be a lot better, less elitist pricks who can't discern subjectivity, and the referenced type of kids who follow in their steps.
The character I'm talking about is Yoh's sister.
I love her character, and now that I think of her after having since gotten to know of Asuka, I realise that the way my liking for her had developed is similar to the reason why I developed love for Asuka Langley(who is my favourite person that doesn't exist).
Just as Asuka's, her mental state was to me utterly fitting, believable, relatable, and I wanted to be there for her.

But okay now..
If a story does to me what Shiro's presence did in this story, I'll be satisfied.
I hope the Woodpecker is happy now.

Bahh! STEREOTYPES
by Findbeatriz
June 1st, 2017, 8:56am
Rating: N/A
Ok so it was compelling at start, but later on the first chapters, it was nothing but your typical grotesque shounen. Impossibly naive MC who lacks character development despite everything he's been through, the stereotypes, and its unrealistic.
Was this comment useful?  Yes

Disappointed
by DemonRath
December 11th, 2016, 10:05pm
Rating: 3.0  / 10.0
Just a sick unnecessary torture manga. I've read and loved manga like Death Note, Gantz and Mirai Nikki where they share in the Strategic Minds or Game of Death genre, but this doesn't get me excited like they did. This just feels silly by comparison. It just feels completely and wholeheartedly fake and unrealistic. I don't feel or care about the characters, and I hope they all die.
Spoiler (mouse over to view)
Truthfully, I got as far as when they punish Crow for losing the battle (ch. 11). I wasn't feeling it before then, definitely wasn't feeling it now.
Why would he be excited to fight if he knew he had the potential to lose a body part? Why was he be hoping to some extent to lose the fight? Why did he have all his body parts before battling the kid even though he's clearly not the strongest person. He never lost a fight before? Really?!
Most manga's ask that you humor them and believe one or two concepts. This one just kept asking that I humor them consistently and throw logic out the window. Nah. I'm good.
Was this comment useful?  Yes

Great start but became disappointing later
by lfb
October 8th, 2015, 4:06pm
Rating: 10.0  / 10.0
I used to rate this 10/10. I thought this was quite refreshing but after awhile the series was just disappointing with the typical shounen scenes. The last 10 chapters I put off for years till now. The very end was eh. Better than the result of the final battle though. I was rolling my eyes so much at that cliche.
Was this comment useful?  Yes

Really loved it.
by Sapphiresky
April 7th, 2015, 8:25pm
Rating: N/A
Was avoiding it at first, because I'd never really gotten into the "play or die" genre but I decided to give it a chance and I really loved it. Finished it in two days.

I also really love Shiro!
Was this comment useful?  Yes

That Twist...
by sarin68
April 5th, 2015, 9:45pm
Rating: 10.0  / 10.0
So to avoid spoilers I won't say anything about it other than it was EPIC! It was perfect with hints making it not out of the blue, was reasonable when explained fully, and led to an AWESOME climax! OMG I love this manga.
Was this comment useful?  Yes