Login to add items to your list, keep track of your progress, and rate series!
Description
A spine-chilling and steamy romance between a Japanese sweets maker and the man who framed her mother for murder—Something’s Wrong with Us is the dark, psychological, sexy shojo series readers have been waiting for!

Following in her mother’s footsteps, Nao became a traditional Japanese sweets maker, and at 21, she’s about to take the industry by storm. With unparalleled artistry and a bright attitude, she gets an offer to work at a world-class confectionary company. But when she meets the young, handsome owner, she recognizes his cold stare... It’s none other than Tsubaki, her chil... More...
A spine-chilling and steamy romance between a Japanese sweets maker and the man who framed her mother for murder—Something’s Wrong with Us is the dark, psychological, sexy shojo series readers have been waiting for!

Following in her mother’s footsteps, Nao became a traditional Japanese sweets maker, and at 21, she’s about to take the industry by storm. With unparalleled artistry and a bright attitude, she gets an offer to work at a world-class confectionary company. But when she meets the young, handsome owner, she recognizes his cold stare... It’s none other than Tsubaki, her childhood friend and first crush-the same boy who stood over his father’s bloodied body 15 years ago, and framed Nao’s mother for the murder. As the only witness of that fateful night, Nao is eager to chase down the truth and confirm her suspicions. Since Tsubaki has no clue who she is, she seizes her chance to get close to him, but instead of finding any answers, she begins falling deeper for Tsubaki’s allure... 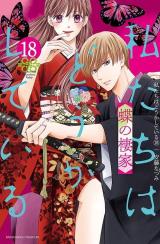 
Serialized In (magazine)
Be Love (Kodansha)

Oh my god, the drama is too much
by Orionthehunter
November 10th, 2022, 2:37pm
Rating: 4.0  / 10.0
Like seriously, they're a freaking confectionery store. This story could've ended sooner if the 2 protagonists actually talked honestly.
Was this comment useful?  Yes

A lot to unpack
by mispelling
March 29th, 2022, 8:33am
Rating: 6.0  / 10.0
The beginning of the manga plays out like a standard mystery manga on whodunnit. Gradually shifts more to a the romantic side when
Spoiler (mouse over to view)
FMC ends up ‘hate’ sleeping with the MMC
the FMC keeps telling us she hates the MMC but her actions… don’t quite line up to what we’re seeing.

Some cliched tropes on infidelity and inheritance drama that both play out on. It’s actually pretty early on referenced by the grandpa so don’t get startled by a certain revelation

There’s a significant arc change after events on a day and it ends up being a really melodramatic love story that was fine but dragged on for 9 volumes when it could have probably been resolved if both MCs actually communicated better.
Spoiler (mouse over to view)
she gets pregnant by him, ends up losing the baby during the day a fire breaks out, runs away for 3 years and seemingly ends things with him when he finds out she’s the girl he grew up with. Honestly it’s so unbelievable how he didn’t realized this for 7 volumes lmao. Then it takes another 7 volumes for him to actually be told that she miscarriage his baby and that’s she’s been harboring as a secret for 3 years

It was okay definitely kept me intrigued but it dragged on over for a while once you get to a certain point.

So Far So Good
by afith
September 25th, 2019, 12:59am
Rating: 8.0  / 10.0
there are still a few chapters being scanlated out, so I can't say this manga is good yet.
The premises is interesting makes me want to keep reading. I love the dynamic so far,
I just hope the MC won't fall for him so easily,
Spoiler (mouse over to view)
it won't make sense because she decided to marry him out of revenge right?

With the premises, I think it will be interesting if this manga adapted to a drama (Lol sorry, just a fan of dorama here)

updated: I hear the news that this manga is gonna be adapted to dorama, yay!
I have a huge expectation for the dorama

Not the best, but somehow gripping
by MaZzAx
May 16th, 2018, 6:29am
Rating: 7.0  / 10.0
This manga is really interesting. One the one hand you get to have a feel for the way traditional Japanese sweets are made, and on the other hand you get to enjoy a plot woven around a 15-year-old murder that haunts all the characters.

I can't help wanting to know what happens next, so I will read on, but I by no means think this manga is perfect.

Basically, the main character 'Nao' used to live with her mother at a 'Kashi' making house together with the son of the man who is to inherit it. They get along really well until the day the son apparently sees Nao's mother murder his dad.

Nao's life is ruined, but she keeps making 'kashi'. Then one day, naturally, Nao and the son's paths cross again and she ends up living at that house again as a prospective bride (he doesn't recognise her). This is of course her way of getting to the truth so she bares with it - and with all the creepiness and nastiness she receives from the grandfather and the mother.

What bothers me about this is that the son - 'Tsubaki' - was the one who ruined her life, but she feels sympathy and love for him too easily. This makes her somewhat unappealing as a main character.