User Reviews
REAL by The Dystopian 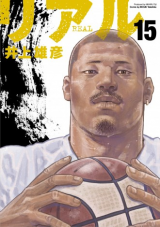 Note: You must be logged in to update information on this page.
Forum Posts Click to view the forum
Takehiko Inoue Resumes 'REAL' on May 23
over 3 years ago
senseless apreciation thread
over 8 years ago
REAL manga (Inoue Takehiko)
over 12 years ago

I don't know if people get what I typed, but yep.
This has got be ONE of the best mangas I have ever read. Give it a read and guaranteed you won't regret.... (or not, according to your type.)
Was this comment useful?  Yes

Quality art, quality story, and characters that are quite interesting. I highly recommend this one.
Was this comment useful?  Yes

Inoue's best work
by ddvdsv
April 8th, 2012, 9:46am
Rating: 10.0  / 10.0
Real is nothing shot but brilliant and is Inoue's best, more mature work. The art is as always, amazing, but it's not the protagonist like in Vagabond, instead it's essential and functional to the storytelling.
The story is realistic, deep and psychological and has one of the most emotional scenes I've ever seen in a manga.
It deals with the small and great tragedies of life, but with a inner feeling of strength and hope. From personal, intimate instances the manga manages to tell a collective tale about human dignity and personal affirmation.
Basketball is not the main focus of the story, but is used instead to demonstrate how a passion can have a major role in overcoming seemingly insurmountable situations.

Consensus
by Hell_Clues
August 13th, 2011, 2:47am
Rating: 8.5  / 10.0
Everyone agrees, this manga is an enjoyable read. The surprising thing about this manga is how it maintains being realistically upbeat about some horrific circumstances.

It covers some of accidents that can happen to anyone, regardless of age, gender, ect. The stuff we'd rather not think about.

I can't put to words what makes this manga enjoyable but I can say that it's worth checking out.

better and better
by fudg
April 23rd, 2011, 4:11pm
Rating: N/A
This is one of the best mangas I've ever read. It's realistic and it really shows the big challenges they have to overcome. As some people already said I love the character growth of Tokomi and the fact that he is getting more spotlight with trying to go pro
Was this comment useful?  Yes

Best sports manga ever
by McCamyTaylor
December 27th, 2010, 9:20pm
Rating: 10.0  / 10.0
The addition of Takahashi to the starting line up of main characters has really improved the manga. "Real" used to be about wheelchair athletes who played basketball. Now, it's about basketball that is played by a variety of characters, some with physical disabilities, some with emotional problems and some with both.

I admire the restraint which Inoue Sensei has shown in developing Takahashi's character very, very slowly. This gives the reader a sense of how difficult his journey is and what an accomplishment it will be if he finally gets back to playing basketball.

Much as I admire the character (and character design) of Togawa, I have always had the sense that for him basketball was second best. Maybe he should try out wheelchair track and field.

amazing
by skyarsalan
May 7th, 2010, 6:37pm
Rating: N/A
every chapter has its own amazingess

when i first read it im like "whats this crap"
but i was really young at the time.

another great story
by genre001
March 7th, 2010, 7:50am
Rating: 9.0  / 10.0
though not as exciting all through out the chapters and volumes like the previous work Slam Dunk, but the story has all the realities of life in it... and the way sports (bball) was portrayed was wondrous.... the substance of the story can rival any manga/novel... defenitely a Takehiko's work... a two thumbs up...
Was this comment useful?  Yes

A bit melodramatic
by Sosseres
January 1st, 2008, 3:07pm
Rating: 7.0  / 10.0
This series wants to show how people handle handicaps and what it does to their lives, while centering it around basketball. It does that very well, it just isn't all that fun to read.

Having just read the first 6 volumes I can see where the series is going. That isn't a fun feeling, this manga is about characters and story. If you know where that is heeded there is nothing but art left.

The art is nice, but it isn't the best there is.

All in all this is a good series worth reading, but not as exciting as his earlier works.
Was this comment useful?  Yes