Login to add items to your list, keep track of your progress, and rate series!
Description
A virgin elf beauty is offered as a sacrifice to a legendary monster to save the village and the monster eats her BUT she was spit out the second after because she tastes disgusting and had super stinky feets among other things, so the monster spoke... CHANGE!... The pretty elf somehow got to live only to be sent back to the monster again after the villagers tried to "fix her to taste better", now more healthy than ever went back to the monster.... but it didnt work out, she was spat again and again, now the elf beauty is pissed 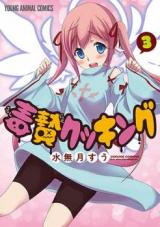 Note: You must be logged in to update information on this page.
Forum Posts Click to view the forum
Humanity is dead
over 4 years ago

Yet another great work from this author
by Seregosa
October 21st, 2018, 5:34pm
Rating: 8.0  / 10.0
I found it to be quite funny and interesting. It's about an elf "sacrifice" that has a huge debt thanks to her father and wants to be sacrificed to a monster so that it'll be paid off and won't be passed onto her sister. The issue here is that her feet stink to unholy levels and that monster quite honestly feels the urge to puke whenever she tries to offer herself up as she smells and clearly tastes like shit. He's also a big softie.

This leads to various situations and although you'd think something like this would get old fast, it was done very well and the being sacrificed/eating/cooking herself is just kinda there while we explore various things, as the relationships between various characters develop and we get a lot of amusing situations. The "being cooked alive" was just kinda a big thing at the start and quickly gave way for other stuff, of course she's still trying but it's kinda half-arsed and she's more prone to sexually harass the monster, invade his living space, eat his stuff and play his games. The elf main character is also damn OP, which makes one wonder why she can't just earn money with her battle skills, haha. However, she's more likely to dominate people while being generally sadistic and shameless. There's a lot of fanservice and ecchi parts, but I don't feel like it's intrusive unlike many other manga. It's kinda realistic, not overdone and feels like a proper part of the situations instead of being forced additions.

Anyway, it's a good novel if you want something hilarious to read, it also feels rather fresh in various ways thanks to its very unusual setting(well, of course, as always, there are a lot of clichés to be found as well, which work doesn't? It's relatively fresh and unique though). Recommended. I just wish there were more chapters to read, but I guess I'll have to be happy with a bit over 2 volumes worth.

Edit: It started to get boring pretty quickly towards the last few chapters, perhaps because the author ran out of steam/ideas and started to go towards the ending. However, he did the right thing and ended it at the right time while it was still somewhat enjoyable. The author did a good job in ending it instead of repeating the same crap over and over again. Gotta respect him for that, most authors cling to their mangas even after they turn stale. This particular manga never had an idea that could be used for a long time and still be amusing, so I'm glad it ended when it did.

Well, the ending was horribly bland, packed with unfitting and half-assed drama and then rushed to high-heaven. That knocks off one point of the score. It would've been better if he just ended it all without the weird drama, that crap just made me cringe and when I'm saying cringe, I really mean it. If you're going to half-ass it, just don't do it at all, that's my motto. Same with everything, be it romance, endings, stories, action, drama, tragedy or comedy. Doing something when you don't have the motivation or time to do it good never ends well, especially if it doesn't suit the mood of the story up til then. A stupid gag story should stay silly to the very last second unless it was meant to be half-drama right from the start. I've seen quite a few authors do exactly this mistake. Trying to change the manga/novel into something that it's not and thus ruining the entire story in the process. Still, the very last chapter which is kinda like an epilogue had the usual comedy and mood in it, being quite hilarious(and the conclusion is satisfying), but that doesn't change the fact that the author wasted several chapters on something that didn't work, so I'll stand by knocking off one point in my scoring.