Login to add items to your list, keep track of your progress, and rate series!
Description
Amamiya just died. Death by bottle tripping... But he is given one more chance, to live... To live in the body of a girl gone comatose, that is. With his new identity, read on how his mind set is slowly changed from a guy to a girl. One thing's for sure, there is more than one body switching in this manga! 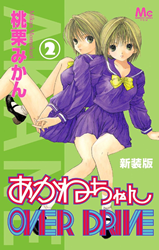 Note: You must be logged in to update information on this page.
Forum Posts Click to view the forum
Akane Overdrive ending...
over 7 years ago

A huge mess, nonetheless good
by Katsono
July 18th, 2015, 1:48pm
Rating: 7.0  / 10.0
There's a main story, and it's not that bad. Body switches happen here and there, it's fun and the characters are all likable. What's more, it's original and evolves in unexpected ways, although there's no real ending, and it's a shame.

However, there are also many side stories, and a flashback thrown out of nowhere about the real Akira. We will never get to see her outside the flashback, but it's really good, and the idea of " wimp turning into a super fighter under hypnosis to protect a girl " is really nice, was stylish and would make a great shounen.

The later side stories still remain cute, although I was confused whether the one about Arisu becoming a guy was part of the main story or not, as she's similar to another character, and her loved one is similar to Akane, although it's later shown he's a guy.

I though the last side story would end up following the same scheme of body switch and happy ending, but instead it turns out differently, being quite surprised and offering a good dose of happiness.

Overall, it's pretty hard to understand and I had to sometimes force myself, but it was an enjoyable read and actually made me smile.

It's OK
by vg8open
August 18th, 2013, 8:14pm
Rating: 6.0  / 10.0
To summarize: it's a pretty funny, no plot manga that doesn't have a proper ending. It's a light read which doesn't take up too much time. The art is good (I am bias toward Mizuki's art style), and the story is pretty funny. The ending feels like the the author doesn't want to choose side so she left it wide open.

Definitely shoujo
by Crisolitedo
June 13th, 2011, 5:05pm
Rating: 3.7  / 10.0
Normally I really do love Mangas by kawashita mizuki but this is definitely nothing I enjoyed.
Aside from the main Story's ending there was a rushed character development and it seems kissing and touching would change everyone's feeling. The idea itself wasn't that bad at all though certainly not the Best either. Furthmore there should have been more explanation about the girl akane itself. Aside about her looks and stuff about and from her family and friends there isn't much information about what actually happened in heaven especially when on the first pages it's told she met her destined one. I don't know if girls enjoy those Stories but I as a guy definitely didn't.
The only reason for not giving 1 Point is the good artwork by kawashita and the first sidestory about the hypnotism. The two other Side stories were at the same level as the main story maybe even worse... but overall this is one the worst manga i have ever read.

Review title: The lost time that I can't never get back.
by Brucie_kun
May 8th, 2011, 5:06am
Rating: 1.0  / 10.0
I just wasted 30 minutes of my life. The ending's so..unexpected. I mean really, I didn't expect how someone who is supposed to be 'professional' in his line of work would make a distasteful act of destroying the characterization of the main characters and axed the ending.

Heed my advise, please read all the reviews beneath me and I assure you: YOU will not get back every minute of your life wasted reading this unworthy piece of sh*t. If this manga is licensed and available in print, I would buy the 2nd volume of the manga, tear the pages and use them to wipe my a** whenever I do my daily visits to the loo. That could save a month's worth of toilet papers.

bleh
by rockerpunk
April 15th, 2010, 4:36pm
Rating: 5.0  / 10.0
*sigh*
this could've been so good...the build up was decent..i hadn't laughed this much when reading a manga for a while
the ending was PATHETIC, ruined a completely good manga
ARGHH
Was this comment useful?  Yes

Loved the Storyline
by Kimi_Feti
August 14th, 2009, 10:27pm
Rating: 8.0  / 10.0
Great potential, and I thought it was really great! But, in the end, it sort of stopped abruptly. But it would've been nicer if Amamiya stayed a woman. Great read, highly recommended. And, besides, it's only 2 volumes.
Was this comment useful?  Yes

I fell cheated
by Kamugin
May 29th, 2009, 2:23pm
Rating: 6.5  / 10.0
I think the authors get tired or annoyed when doing the second half of this manga. They totally screw up the plot and the humor in the end, it's really disappointig because they rise high the reader expectation but they ends the manga abruptly and in complete nonsense.
Was this comment useful?  Yes

ending wtf ?
by bluelime
April 29th, 2009, 1:03am
Rating: N/A
I actually like the story not the best plot in the world but a whole lot of potential. I think that the mangaka had a idea that lose it self somewhere and then just ended. I can't say that it was a bad ending more like no ending at all because. When I went to read the next chapter it was a short story and I was like what did I miss something and realized that I had all ready read the ending. This manga leaves you with an empty feeling at the end. Good for a laugh but if you don't mind plot holes and a ending that just stops end it tracks then you should read it but. If not don't because you might get frustrated. (^_^)
Was this comment useful?  Yes