Login to add items to your list, keep track of your progress, and rate series!
Description
From Hoshikuzuu Scans:

Living the high school life, being admired by all the other species in his school, Rurikawa (Wolf. Alpha. Male.) meets a lower species, Kyougokuin (Rabbit. Beta. Male.) As soon as their eyes meet, Rurikawa thinks, "I want to breed this beautiful creature." He's suddenly unable to control his urges as he's turned on. In a world where men can also become pregnant, this series tells the story of high school boys being led around by their instincts and fate. 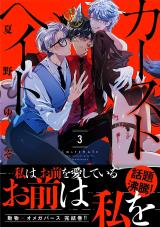 stories within a under explained universe
by Zhangorphne
August 7th, 2022, 10:48am
Rating: N/A
So this story works if there was a larger more encompassing one in which this was just a Side Story. It doesn't have too much plot it's mostly just a slice of life at most. I do honestly think that it could have been better but it wasn't bad for what I think the author was going for.
Was this comment useful?  Yes

bad
by ShonaNingyo
May 25th, 2021, 8:01pm
Rating: N/A
I've read another manga by this person and I'm seeing a theme which is: The author doesn't know how to tell a story. It's just fluff, just characters...doing things, but there's not really anything that makes me feel invested except that the art is pretty good..
Was this comment useful?  Yes

YEP IM CRYING
by Internal_Thing
January 3rd, 2021, 2:50am
Rating: 5.0  / 10.0
I just finished it and let me tell you, if you got attached to the snake, the ending is rather bittersweet, as he said
Spoiler (mouse over to view)
You were my destiny, but I wasn't yours,he will be alone in the end
Was this comment useful?  Yes

Welll
by Puffyeyesmiles
December 14th, 2019, 2:27pm
Rating: N/A
I kind of enjoyed it, they weren’t the flashiest bunch to be put together but for some deranged reason it did kind of work out. Their instincts are a but fucked up from normal manner in other id say hybrid universes but the small touches of actual emotion how wolf saved his friend how rabbit got angry and jealous over the snake and they didnt even try to beautify rabbit and gave him this massive ginormous beast that for some reason only wolf sees the true beauty of. Like they have a weird way of approaching a lot of mainstream issues but i think they get in there and they had fun with it id say. Also ohohoho art style is mwha~x
Was this comment useful?  Yes

Trash
by blackstrawbeery
September 27th, 2019, 11:05pm
Rating: 1.0  / 10.0
Not recommended. The storyline is a mess, too dragging. Reading this story is a torture. Wolf is a scumbag and rabbit is a bitch. Now updated until chapter 15 but wolf still cant decide who to choose yet.
Was this comment useful?  Yes

it's a hell of a mess
by kidoraku
July 7th, 2019, 4:08pm
Rating: 2.0  / 10.0
The plot is so fucked up that I have no words to describe it. Reading this shit is like a torture. Not only introducing the whole universe sucks or more like it's non-existent but also there are holes in the storyline, it feels like there's a missing chapter after ch.3. I don't know, maybe it's a scanlation issue. but after some time you don't even know what the hell is going on. Mentioning other fails is a waste of time, so I'll stop here. Oh but the art is good.
Fell like you were warned.
Was this comment useful?  Yes