Login to add items to your list, keep track of your progress, and rate series!
Description
High school student Tetsu Iwaoka notices that his classmate Mogumu is always alone at school. Wanting to give Mogumo a chance to make some friends, Tetsu invites Mogumu to work at his family’s maid cafe. Although Mogumo is initially enthusiastic, there is just one problem: this is a girlyboy cafe, but Mogumo is adamant about being neither a boy nor a girl. 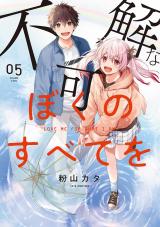 
Serialized In (magazine)
Comic MeDu (GOT)

Amazing!
by TehShush
March 19th, 2021, 4:43pm
Rating: 10.0  / 10.0
I started reading this thinking it would just be a cute crossdressing manga, nothing different than all the others. Some maid uniforms, some ecchi scenes, some "she is cute, but she is actually a he" crap that is inevitable with CD stuff...

I was honestly amazed at the depth of this series. It covers both sexuality and gender, overlapping and as separate issues. It covers familial and friend acceptance, as well as associated difficulties.

Warnings for brief coverings of self harm, eating disorders, and depression. They are not the focus of the story, so they aren't fully covered but they are briefly shown so they might be triggering for readers.

I feel like this is similar to Hourou Musuko in how it portrays gender dyphoria, but it has a different approach. I especially loved that it covered a wider array of identities within the LGBTQ community, characters fall under these labels: lesbian, gay, non-binary, transwomen, and there are others that are mentioned in passing.

It starts out quite light-hearted and gets more serious as the series continues, but it retains the cutesy quality throughout. Like the previous commenter mentioned, the language used also changes over time, a huuuuge bonus for realism and education as it shows the characters growing and becoming more knowledgeable about the subject over time. Characters switch back and forth between pronouns at the start, but eventually use the correct ones for each person. It's such a noticeable difference despite the fact that they don't bring a bunch of attention to it, and really shows how much thought the author and translators put into the work.

I will heavily recommend this manga, and look forward to reading it again in the future.

One of the best LGBT manga I've ever read
by EmpressWinter
March 6th, 2021, 2:34am
Rating: 10.0  / 10.0
It's so rare to get a legitimately good lgbt manga that has a real story. (As opposed to lgbt manga that's more like an autobiography) The characters are cute and charming, the story manages to be a good balance of drama and comedy, and the art style is nice. There's also actual character development and that's saying a lot when it comes to manga.

it should be noted that the terminology and way characters interacts changes over time, so it may start out sounding somewhat offensive / out-of-touch when it comes to gender identity, but gets better.
Was this comment useful?  Yes