Login to add items to your list, keep track of your progress, and rate series!
Description
A comedy using perverted themes. Mainly between brother and sister. 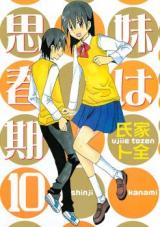 Sometimes very funny
by Slashout
October 17th, 2018, 2:16am
Rating: N/A
The beginning is particularly funny. I also enjoyed the flash backs of when the sister was in kindergarden a lot.

But the manga has three big weaknesses.
1) The art. A Lot of the characters are very similar. Some are even completely identical at the exception of a slight hair twist. This is a terrible idea. Most of the times I can only guess at which characters are drawn at the beginning of the skit and have to use context to find out who they were at the end. Often I just don't know even when it is over. It really degrades the experience. Is it the sister and the brother? The sister and another girl? Is that even the sister and not the cousin with another Chara?

2) Repeativeness. A lot of the gags are duplicated. It's not even "kind of the same gags" but exactly the same reused: bro and sis in a room, lights cut off, bro ask for help to restore light, sister "mistakenly" pulls down his pant's zipper by taking advantage of the darkness. A few volumes later exactly the same thing except in another room. There are a dozen or so of gags repeated like that.

3) À lot of the jokes only make sense in Japanese. It's fine if the translator explains how the gags works in Japanese so we can appreciate it. But the thing is that the translator does not do enough to explain. Sometimes there are no explanations and it's impossible to understand at all. Sometimes the explanations are too short. An example of such gag that needed more info. The kindergarten teacher ask the kids to draw and match animals with the food they eat. The perverted sister draws a squirrel and nuts but the teacher stops her from naming the animal and food. We see her trying to say "chestnuts and squi.." multiple times, only to be stopped by the teacher each times. The translator only tells us "kuri = chestnuts, to = and, squirrel =risu" and that's all. It's hard to understand here, without the translator pointing it out or giving more info. Is that a word play? Is that combination of words something perverted in Japanese? If so what is it? In this case it turned out that the sister is trying to say "kuritorisu" which sounds out "clitoris" when spoken by a Japanese.

At the beginning this is fine but all this builds frustration as you read on. Particularly if you are binging.

Mildly amusing all the way through
by Seregosa
October 4th, 2018, 1:44pm
Rating: 7.0  / 10.0
It's not that bad of a manga, it's definitely readable if you just want to read a lot of 4-koma short stories with dirty jokes every single time. The reason it gets a 7/10 is because it does what it offered and never fails to keep on delivering more dirty gags, nothing more, nothing less, it's also because I found a select few of them to be hilarious enough to laugh out loud at. Well, really, maybe it's just worth 6/10 if I consider my real enjoyment.

I do have quite a few complaints about this manga, let's list out a few of the issues. First of all, as one would expect, the gags get old fast. Maybe it's also because I'm growing older, but I just don't find these sex gags to be that funny in the first place. It has no real novelty value for me and I'm not young enough to chuckle or laugh just because it is about "dirty stuff". Sorry, it has to offer more than that, but it usually doesn't(with a few exceptions here and there, but it's pretty rare that it manages to hit my funny bone to the point where I actually laugh). Even if I was younger, I doubt that reading very similar gags over and over again would keep on being funny, nothing ever changes, we know what to expect and it delivers the same formula over and over again, you're bound to get sick of it after a while. Might have more appeal if you didn't bulk read it and just read a few chapters every now and then.

My third biggest issue is the art style. Now, don't get me wrong, I don't mind shitty art, at least not if it's just a comedy manga. My issue here is that everyone looks the same. I can hardly recognize any of the characters. The only ones I know for sure about is the blonde guy because he's blonde, two of the teachers because they have glasses etc... The rest are impossible to know and you have to deduct who they are from the dialogue. The female teacher without glasses looks like any other student, the little sister looks like any other female with black hair, the long haired girls look like any other girls with long hair, the blonde haired girls are the same. All too often is it impossible to deduct the gender of a person when they pop up and you either have to rely on the dialogue or a full-body shot where you can see their clothes or if they have breasts or not. This is not okay and I wonder what the heck the author were thinking about while drawing this up. Even if you don't want to improve your art style or change how the characters look, AT LEAST modify them in some way, like giving them different hair ornaments or anything else that makes it easy to see who they are. It's not hard to make a character easy to remember and differentiate from the rest. It's just laziness if you can't be arsed to do so when you don't have an art style that makes characters distinct from one another.

So, in the end, it's readable, but certainly no masterpiece. It's hardly worth 7/10, but got that score because it was faithful to its premise all the way, we got what we asked for. I recommend to read this spread out between other manga, novels or anime, read a few chapters now and then, don't bulk read it, it's not a manga that can be bulk read and still be fairly good.

Fun Little Series
by McCasper
November 13th, 2011, 2:55am
Rating: 7.0  / 10.0
Usually I pass up 4koma series because they get stale really quick but not this one. Maybe it's because I'm satisfied the way things are now that I don't mind how there's no plot. Anyways, this series is good for some chuckles so chuckle away.
Was this comment useful?  Yes

ULOL (ULTIMATE LAUGHING OUT LOUD)
by Kito00
December 7th, 2010, 2:02am
Rating: N/A
I really really like it...i cant stop my eyes crying, and screaming out loud, Reading this manga makes my day totally in a good mood. I dont care about those annoyed looking at me laughing while reading this man...i really does cant care..LOL
Was this comment useful?  Yes

Some of the gags and characters are so damn funny, that my stomach begins to hurt from all the laughing... Esp their chemistry teacher... she's one dangerous lady...

Spoiler (highlight to view)
"All the boys who haven't scored well in this test, I'll assume they waste their time ma*********g...

Spoiler (highlight to view)
"So why do you keep pron mags in your desk?"
"Cause if I leave it at home my sister reads them all.
Was this comment useful?  Yes

sick
by x0mbiec0rp
December 7th, 2007, 2:18am
Rating: N/A
and I mean that in the good way. It's really funny the jokes you can pull when your pervert's a young girl. The art leaves something to desire, but I don't really expect much in that area from a four panel strip. The characters really make this shine.
Was this comment useful?  Yes

the good kind of ecchi
by JakeAteCake
August 10th, 2007, 10:55am
Rating: N/A
I'm gonna give it a 10, because this is probably the only ecchi manga witch isn't full of creepy fanservice.
Oh the jokes are pretty hilarious and somewhat cute
Was this comment useful?  Yes

Funny
by ubernoob
April 15th, 2007, 3:47pm
Rating: 9.0  / 10.0
Short stories (4-panels) about a brother and his perverted younger sister. The comedy is quite ecchi and gets a bit stale after a while, but still a funny read.
Was this comment useful?  Yes

short stories big laughs
by UndecidedX
March 27th, 2006, 12:19am
Rating: N/A
About about 4 panels long short funny strips. Although the art is a bit sketchy at atimes, its comedy, mostly ecchi, is top notch.
Was this comment useful?  Yes

Reported
Pages (2) [ 1 2 ]
Next Page
You must login to comment for this series! Register an account.
Search
Advanced Search