Login to add items to your list, keep track of your progress, and rate series!
Description
Onohara Asami is a cute, 17 year-old, 2nd-year high school student. What nobody knows is that she's actually already married, to her physics teacher.
Besides her responsibility as a student, she now has to take care of the household and keep the marriage a secret in school. Will she be able to do all of this and will she succeed in making her danna-sama (husband) interested in her? 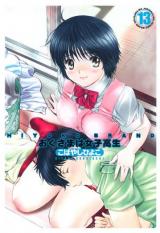 Note: You must be logged in to update information on this page.
Forum Posts Click to view the forum
Is the Netorare for real?
14 days ago
What's up with Okusama wa Joshi Kousei 28?
over 12 years ago

It's Back!
by cecropiamoth
May 2nd, 2018, 7:37am
Rating: 9.0  / 10.0
I sadly had to let this go a good five years or so ago, because the scanlators stopped scanning it. That was disappointing, because it contains the most lovable sexy young wife anyone could imagine, who's often drawn naked or semi-naked. And the husband is the kind of earnest but sexually innocent young man that many a shounen hero would grow up to be. Plus there's the perpetual danger of discovery by the school authorities of their marriage, and other guys circling the wife like bees around an unvisited flower.

You may not like it if you're a woman, but I bet you will if you're a man (unless you get impatient with the uncool husband).

Another bit of evidence that if you just keep a neglected scanlation on your reading list long enough, you are likely to be rewarded.
Was this comment useful?  Yes

you'll get it, that's the source of all the problems that occurred in their life.

At the beginning it's fun to read. But, after several chapter, the wife's turning into a cheap woman by thingking of

having affair, accepting her breast to be touched by doctor without further explanatios, accepting to be a hostess,

etc. It's just getting harder and harder to read, as I can't help but think of her as a cheap woman, yet she's the

main lead. At start asking to be embraced, but later reject it, though she's not againt the idead of gettng

And yeah, the husband character is just like your ordinary main character. At the beginning, he's kinda realiable,

but later yeah he'll easily swayed by the other girl, though I'd say he's not in the worse position than his wife.

Can't help but give it low score, as the story itself is kinda standard, and I kinda can't stand with the both the

This isn't so bad
by born2shop
January 27th, 2013, 11:10pm
Rating: 8.0  / 10.0
At first I thought it was going to go in the same directing as Faster than a Kiss but I was happy to see that Ichimaru sensei's principles were a little more lax haha

Though they haven't quite gotten there yet, I'm glad to see that they're making head way. Though I can't stand the stupid obstacles like Sasuke-kun and stupid Iwasaki sensei and her little brother
Spoiler (mouse over to view)
I mean all he has to say is "bitch back the fuck off. She's my wife and you better keep the secret or else I'll say that you were having sex with little boys in the office" and that would be that.
Grr!! She's so damn annoying. Why do girls always want what they can't have? The man already said he has someone that he loves, why pursue?

Anyways, I love the art... But why don't we see Ichimaru sensei's eyes hmm Moving on... I like the manga but 13 volumes? Damn I really wish it would go faster than a kiss. I just want them to bang and get it over with already sigh. I sure hope it wont be 13 volumes of almost doesn't counts.

Are We Reading the Same Thing Here?
by Seijurou
February 8th, 2012, 2:06pm
Rating: 8.0  / 10.0
You may not like it, but there is a story in the manga. The short chapters in the beginning were about the girl Asami's wanting her husband to pay attention to her (which he actually does when she is not looking), and ended brilliantly with the long part entitled When Will You Show That You Love Me, launching it into serialization.

In addition to the development of their relationship, the plot also became focused on a new rivalry between two girls over the sensei (although I wished that they were both students to be more equal), and a little on keeping the marriage a secret. Furthermore, the mystery remains on how the heck did Asami and her husband tie the knots without so much as kissing or having her father's approval beforehand.

Hence, although it started out as a slice-of-life comedy, the title evolved into a beautiful romantic drama for the larger portion.
Was this comment useful?  Yes

Character Driven
by alexdhamp
June 22nd, 2011, 12:38pm
Rating: 9.6  / 10.0
I don't know why people always whine about lack of plot in stories like this. What part of "Slice of Life" don't they get? The "plot" is their life together. Basically, it's a character driven story, not a plot driven. Great manga to me.
Was this comment useful?  Yes

A Unique Concept; Needs More Thought to Hold It Together
by MightyMaeve
November 4th, 2010, 11:51am
Rating: 3.0  / 10.0
Review for volume 1:
I give the full-colour art a 9 because it is so curvaceous, well-proportioned and liquid. The flow of the manga panels is clear and clean; the unique concept of mini-chapters exploring the one emotion each that belong to the man and woman could have been done in a more intelligent and poetic way to compliment the art.

Cute :)
by SharpMonkey
September 6th, 2009, 11:06am
Rating: 9.0  / 10.0
The reason why I love reading ecchi manga is because of how the characters actions are rather teasing and cute. I guess it could use more plot, but I personally like that it has a low innocent feel to it.
Was this comment useful?  Yes

Also, it starts out in a snippet form. Chapter 00 has like 20 parts to it, each one is only about 5 pages featuring Asami's woes in getting it on with her husband. After that the real story starts to develop, which is in some ways more interesting and in other ways a turn off (that's when the characters start getting developed and their weak-willed personas get called to the front).
Was this comment useful?  Yes

omg
by iaminlovewithU
May 4th, 2008, 4:48pm
Rating: N/A
i just read the funniest comment..{lol women's rights by Does Not Forgive)VVV
VV
V
but yea it's only good if u wanna see naked grls...
i don't so i give it a 5/10
it would b less but the art was good
Was this comment useful?  Yes

There is no "real" plot, other than the fact that Onohara Asami wants to get laid by her husband. <3 I really love her, she's so utterly cute! :] Her husband not bad looking either.

The first volume is full color, and most of the stories were short [2-15 pages]. The second volume became a "manga"/serialized.

A recommended ecchi comedy manga. :] Be warned though, nudity.
Was this comment useful?  Yes