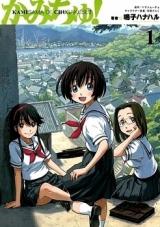 charming
by whitespade
September 14th, 2013, 10:42am
Rating: 8.6  / 10.0
i like the matter of fact way the people accept the presence of god in a girl here, its quite refreshing. the girl is very cute, i love her shy personality and i also like all the characters here, they are very likeable. the plot is nothing convoluted, just peaceful. i love the art and the myriad of gods here, japanese gods are just very interesting!
Was this comment useful?  Yes

Manga > anime
by Justiflake
August 14th, 2012, 3:35pm
Rating: 10.0  / 10.0
I know this was supposed to be adapted from the anime, but in comparison, this was a million times better. In fact, I jumped into the anime after reading a few chapters, but it was so disappointing I had to drop it.
Was this comment useful?  Yes

Goody goodness
by thesteezybeezy
July 3rd, 2010, 10:02pm
Rating: 10.0  / 10.0
This is a great little manga that just flows with a feel-good kind of atmosphere. There's a little bit of everything, it's super well rounded and really an all around good read. Plus, the character development is pretty boss. Just what I like.
Was this comment useful?  Yes

A bit under half of the stories are pretty much the same as those in the anime though with a few edits here and there that I don't really understand the reasoning of. The half that are original don't really add that much. There are a couple of new characters that don't really go anywhere, and the mangaka seems to have decided to push the romance angle a lot more instead of doing it in the more natural subtle way that the anime did.

Also the volume on the "moe fanservice" has been turned up a notch or three. There is a somewhat consistent smattering of new School Swimsuit/Changing/Bathing/PE Uniform scenes which I find pretty unecessary and annoying more than anything. I mean for hecks sake, are you really going to be wearing bloomers to do heavy lifting?

One of the Anime-based stories even gets editted so that the main protagonist gets soaked early on and has to spend the next two chapters worth of story wearing her school PE gear complete with a couple of bloomer focus shots. I found that to be very subtle. And for the sake of reference: The PE uniform in the anime - in the one(?) scene it appears - has shorts *not* bloomers.

I guess that that sort of thing does have its place, but I don't know that you have to change the dynamics of an existing story to get it. And unfortunately in this case since I've already watched the anime the moe fanservice factor is even more glaring by contrast as is how deliberate it is.

In the end it is actually not a 'bad' manga but it just doesn't compare to the anime.

The story, while simple and mostly episodic, flows well, and draws interest. The myriad god characters are cute and amusing, and that whole aspect of this story makes it worth a read. Even though the plot seems simple, and like not too much really happens, because of the spiritual side of things, there's actually a lot going on. If that even makes sense. I guess it's kind of a "there's more than meets the eye" thing.

All of the characters are great. Some of their personalities or behavioral traits seem a bit clichéd, but it's not as though that's distracting/annoying -- it seems to work well, here. Also, Yurie is insanely cute.

Finally, I wanted to mention the artwork: it's incredible. From incredibly detailed and beautiful backgrounds, to great character artwork that really conveys emotion and mood. I just don't have enough to say about how impressed I am with the artwork. There's so much beautiful scenery, it's easy to forget you're reading a comic. There were a couple of full-page spreads tthat were simply a still scene, but felt ... it was a "...wow." moment for me. Rarely do I stop to focus on the artwork, but for Kamichu, I found myself doing it a lot.

Top-tier, grade-A, excellence on paper. Only wish it lasted longer.
Was this comment useful?  Yes

Kami~chu
by Disremembrance
March 29th, 2009, 12:55pm
Rating: N/A
I found the combination name; one of 'kami' for god, and 'chu,' part of the word for a middle schooler; to have been fail. There was absolutely no kami chu. No gods kissing. Wah. *finishes fake sobbing*
I loved the whimsical art, how it always got me, and entertained me, didn't lose me at all. I want to make a pretty tribute to the art, I like it so much. It oddly reminded me of the studio Ghibli films, namely Spirited Away, because of the spirits' and gods' oddly fascinating ways and mannerisms.
Was this comment useful?  Yes

Fantastic read!
by Geese1
September 12th, 2008, 5:46pm
Rating: 9.5  / 10.0
This one really took me by surprise. I stumbled across it by accident when browsing another forum and it was getting a lot of good press there so I decided to give it a shot.

And I'm really glad I did too, as this is a great manga in just about every aspect, from the nicely developed characters, to the laid back feeling (characteristic of a slice-of-life book), to the fantastic artwork. The story moves along at a good pace, and while there's no real connecting arc (other than her love of the boy she likes), chapters just seem to flow together naturally, and by the time it ends you look back and realize that there actually was quite a bit of development over the course of the two volumes.

If I do have a complaint, it's that the two volumes necessitates focusing most of the story on Yurie herself, and I would have liked to have seen a few more chapters devoted to some of the people around her as all of them are interesting enough to make me want to know more about them.

In the end though, it's a minor complaint. As it stands this manga is a great read and I can wholeheartedly recommend it to anyone looking for a laid back slice-of-life book with a nice serving of friendship and romance thrown in for good measure.
Was this comment useful?  Yes

Good clean fun.
by 2H
September 7th, 2007, 10:12am
Rating: N/A
A 9 might be to much, but it gets such a high mark, because there's a lack of this type of manga(slice of life). And you lose nothing if you try it. Unlike other manga's that rape your mind even if you just read a few chapters.
Was this comment useful?  Yes

There's also an anime of this manga (or does the manga come from the anime?) which is superior-quality too.

They are both Must-Read and Must-Watch.
Was this comment useful?  Yes

cute!
by barbapapa
March 29th, 2006, 10:08am
Rating: N/A
Really like this series, but the anime is even better tho ^^
Cute, relaxed, moe... you name it; Yurie is really adorable as a high school goddess trying to find herself
Was this comment useful?  Yes