Login to add items to your list, keep track of your progress, and rate series!
Description
Teased unmercifully for his past as an orphan and a slave, Teito has only his best friend Mikage to ease his days at the elite Barsburg Academy - and his mastery of the magical art of Zaiphon! But even that will not be enough to save him when he discovers a horrifying secret behind the ruling Empire. Trapped in an ancient battle between a wicked Death God and the Seven Ghosts and guided by three mysterious priests, Teito discovers a power that could save the world... and shed light on his own mysterious past. 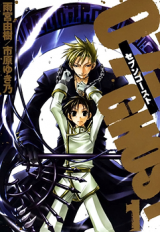 Love it
by Zyn_Klein
June 26th, 2022, 6:48am
Rating: N/A
I love it, i love the characters and villains, the story and love it portrays. Until now, its my all time favorite that im willing to erase my memories of reading it just to re-read it again. 100/100 will read again just to cry and laugh and cry some more.
Was this comment useful?  Yes

I really love 07-Ghost
by Miachann
August 11th, 2020, 9:36am
Rating: 10.0  / 10.0
Not kidding, i love 07-Ghost so much.. both the manga and anime is gem, i hope in the anime they can make it season 2 its been a long time really, and u know i cried when the manga end huhuhu, 07-Ghost is part of my childhood i wanna cry huhuhu my ship Frau and Teito huhuhu, i feel bad really Teito in the end being alone huhuhu.. and tbh i ship Teito not only with Frau (Im sorry Frau) but with Mikage, and Ayanami as well and even Ayanami such a villain he is freakin Hot lol ಥ⌣ಥ
Was this comment useful?  Yes

It was one of those series which confirmed me in my decision about quit reading fansub scannation. There were lot of translation mistakes and notes like - I do not know what they say here but it is not important.

That's why I was SO happy when I found about Go!Comi publisher and their official translation. Unfortunatelly they quit after 3rd volume. But I was strong in my decision and waited till 2013 when Viz Media started publishing it in English again.

If they wouldn't I should buy it in Japanese and read it this way as I'm doing now with many other oficialy non translated series.

Between 2014 - 2015 I bought the whole 07-Ghost series from Viz Media a read it. I admite the end is little bit weak but I do not think it is so bad. I saw more horrible endings of good series. If I don't count the last two chapters it is very good fantasy with great story full of emotions. I love tragedy, drama stuff and despite the fact I hate religions I found 07-Ghost very enjoyable and this serie has special place in my heart and room too.

I think 07-Ghost is very similar to Pandora Hearts in many ways and has similar pattern with Kuroshitsuji too. All are my favorite series. So if you like any of it, I recommend you others.
Was this comment useful?  Yes

Appalling
by PZcolo
October 20th, 2015, 7:31am
Rating: 2.0  / 10.0
It's been a while since I read something as bad as this, the story is terrible and makes little sense, there isn't even one decent char and they all act gay, the only decent thing is the art and yet it doesn't have much fluidity so it's hard to follow the action and fights which ain't very good either. That and all that TisiphoneStar said.
I don't get the high rate of this manga at all. Dropped, might try again since all the high votes but I doubt it.

The ending is just so sucked..
by Hằng_Nga19924
August 18th, 2015, 2:04pm
Rating: N/A
The title says it all! I don't like the ending, too rushed and sudden. It feels like the author were writing chapter 95 with a lot of ideas and the editor suddenly forced 'I want you to finish the series in the next 4 chapters'. Heck!!!
Was this comment useful?  Yes

overall great, but very rushed ending...
by moonmystery
May 30th, 2015, 12:23pm
Rating: 7.0  / 10.0
This story is a complicated one. Much of it tugs on your heartstrings, making you want to cry. The guys are all very close with each other, and all are filled with brotherly love (no homo, although at times I wished it was a bit more gay).

Story is very long, with A LOT of characters involved. So better get the 07 Ghost Wiki open just in case you forget something. Beware spoilers, however.

I recommend this to anyone who likes emotional stories starring an (almost) all male cast. Bonus point for those who enjoy dark, controversial themes and medieval gothic artstyle blended with futuristic sci-fi.

OMG
by jazmyn
November 26th, 2014, 7:22pm
Rating: 10.0  / 10.0
This has to be the best fantasy manga with one piece right behind it. in turns of anime it's right behind one piece.Why? because the anime stops or finished right before it went to the good part. the plot is unique. No, it's extremely unique it was like a whole new level of a well planned manga. It was so unexpected it has a mixture about everything you want from a fantasy manga. It has strong character development especially in the main character. another thing i like is it is unpredictable, it's not girl meet strong guy or guy meets strong girl junk. it's not being taken over by your hidden power like some manga has, but this shouldn't let you down. You are going to come to a point where you know what i mean when i say the hidden power doesn't control the character and it is less important than the secret past. It's just fantasy on a whole new level, you won't know what you are in for when you read it or when you finish it. If you love action, shounen, or adventure manga. then you'll definitely love this about the young boy who was set out for the biggest mystery of his life.
drawing 10/10 (trust me i've seen worse)
plot 10/10(you already know why)

Disappointed
by kahoko
August 26th, 2014, 11:17pm
Rating: N/A
The last 2 chapters just ruined the whole story for me. Ayanami's past and what he was looking for (don't want to spoil anything) made just no sense. As for the ending, it was plain horrible. So frustrating I can't even begin to describe it.
Was this comment useful?  Yes

And a Awesome one again..
by MinatoAce
June 6th, 2014, 11:08am
Rating: 9.5  / 10.0
Well...
I've read it many times as it was a monthly one, I used to forgot previous chapters time to time...haha...
I always enjoy reading/watching the ones contain God*, Archangel*,Satan*(Varloren), Angel, Bishop*, Exorcism* etc.
after all supernatural is the best genre...
Over it was a great reading journey, though they could have made two chapter ending at chapter 100...^^

* = you'll see these ones in this Manga ~!
Was this comment useful?  Yes

It was interesting...
by cutiewootie
January 22nd, 2014, 10:18am
Rating: 10.0  / 10.0
The moment I started reading through this manga, I started foreshadowing every possibility and every angle. However, my mind started shutting down, because of all the brain work and it started to make me hate reading the manga. So I started reading it without over-analyzing too much of the details, haha. It was a great manga overall.

If anything, I was greatly displeased with the first volume (which I believe is chapter 1-5). When I first read it, I thought I was reading a one shot, because of the hurried pace of the beginning chapter. I felt everything was bit rushed and it was a serious turn off. The only reason why I pulled through, was because of the manga's cover. The image of Teito Klein clinging unto Bishop Frau and Bishop Frau with this scythe around Teito Klein was so sexy, I actually pulled through to read on. I am so serious.

I am happy I did pull through though, because it got way better and I enjoyed it to the very end. Based on mangaupdates and wikipedia, the genre of this manga is action, comedy, drama, fantasy, josei/shoujo, and supernatural. I have no idea if it is because this is a josei/shoujo manga, but it literally borderline with the genre, shounen ai. I mean a couple of times, I was so sure I would see "boys love". If the authors actually included some illicit graphics, it could have easily turned into yaoi which would have been a major plus.

Anyways, this is one of those mangas, where I would actually read it a few times over, because I thoroughly enjoyed reading it.

Spoiler (mouse over to view)
I sort of wish it could have continued just a bit longer, because I wanted to see reincarnated Teito Klein calling Capella, oni-san/sama. Plus, the surprise on Capella's face, when he sees a young Teito Klein and not his former older teacher/friend. It would be even wilder if Capella taught Teito Klein how to use his Zaiphon, haha. Nevertheless, I wish I could see child Teito follow Capella like a duckling.It would be the CUTEST THING EVER AFTER DESPICABLE ME!!!