Login to add items to your list, keep track of your progress, and rate series!
Description
Due to an accident, the protagonist Varius died and was reincarnated. He was shocked to find in this new world, his former job as a Tamer in the previous world was acknowledged as a low class job in this new world.

Utilizing his knowledge from his previous life as a basis, he then applied unique buffs to his beasts, taking back the ultimate power that he once possessed. With this power in his hands, he sought to start his life as an adventurer. However... 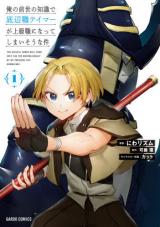 Nice art
by Mekronid
July 2nd, 2021, 11:13pm
Rating: 5.0  / 10.0
It's got a decent hook I'll give them that. However, the ignorance is astounding.
Spoiler (mouse over to view)
"Pass the exam?" Like that isn't a given. Then the random addition of "Beelzebub." What is with Japan and the King of Gluttony? It really, really doesn't belong in this setting. At all. I was willing to overlook this and then we immediately got what I like to call "chibi$hit." That is, the characters are unnecessarily cutsied up through some kind of shrinking spell. This removed the last bit of thematic tension - his OP looking monsters. Now, he can just make them cute at any time and this totally defeats the purpose of, you know, summoning. The key part of his Tamer class. They can just hang out wherever like a toy poodle.
This story already confined it itself to "power-up fantasy level-up YEAH" within the first 7 chapters. The plot itself, if you can call it that, honestly isn't even that good. But the real killer? Not a single character has been developed, not even the lead. I mean, usually you know something about the lead's life other than what he looks like and the fact he has a mother. It's seven chapters, man, get on it! The only thing the author has done adequately is show the world's scenery and the lead's cool powers. Are they gonna add a freakin' harem next? I mean, come on!

If you're looking for anything beyond "OP Isekai with cool visuals" I'd call this one a hard pass. I only rated it five because the artist gave the monsters a unique and individualistic feel, which is sorely lacking in tamer mangas. Maybe the other stuff will change in later chapters, but, with how quickly the author built a sealed box around his character's development path, I highly doubt it.