Login to add items to your list, keep track of your progress, and rate series!
Description
In an area of town overflowing with sex related shop is a bar named 'Bar Kain', where the desires hidden at the bottom of customer's heart is guided forth.

1) Sex Therapist
Hoping to make an arrest, detective Ryouichi Ohnuki decides to investigate Kain, but gets distracted with thoughts of his straitlaced co-worker.

2) A Man Who Dreams
Salesman Obinata is in love with adorable co-worker Himeno, but feels guilty over his dirty thoughts. Maybe a trip to Kain will help clear things up.

3) The First and Last Man
When Aki runs into his former brother-in-law Naoto at a gay bar, he's furious! What els... More...
In an area of town overflowing with sex related shop is a bar named 'Bar Kain', where the desires hidden at the bottom of customer's heart is guided forth.

1) Sex Therapist
Hoping to make an arrest, detective Ryouichi Ohnuki decides to investigate Kain, but gets distracted with thoughts of his straitlaced co-worker.

2) A Man Who Dreams
Salesman Obinata is in love with adorable co-worker Himeno, but feels guilty over his dirty thoughts. Maybe a trip to Kain will help clear things up.

3) The First and Last Man
When Aki runs into his former brother-in-law Naoto at a gay bar, he's furious! What else has Naoto been hiding from him?

4) Sweet Man
Takerou's sweet shop is a rival of the foreigner Shimon's pastry shop. But Takerou is secretly addicted to the competitions sweets, and not just for the taste.

5) Prince of the Ice
After a serious injury, ice skating champion Reo Toujou's relationship with his coach, Dzhokhar fell apart.

7) Free-F@#%ing Father
After an amazing one night stand, seminary student Ippei Niwa can't get the sexy guy out of his head. When they meet again, Seiji Kusama is the priest Niwa is mentoring under. Less... 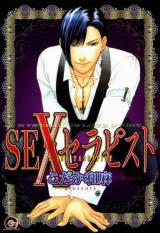 Worth the time
by witchy tay
October 1st, 2012, 7:26pm
Rating: 10.0  / 10.0
I love this story! Actually they are a bunch of different stories which only thing in common is the fact that they are all conducted by Kain, a bar tender whose job is to make fantasies come true, but in doing so he teaches important lessons to his costumers and helps them in several ways.

He is a very interesting creature, not your usual yaoi character, so I enjoyed it a lot. Also, the illustrations are GREAT.

The only sad thing here is that they never really explain Kain´s story or background.
Was this comment useful?  Yes

Questions I want answered
by supmaguire
August 22nd, 2012, 2:47am
Rating: N/A
Sooo in the seventh story,
Spoiler (mouse over to view)
do those two stay priests even while engaging in a relationship? ? ? ?
lol the way mangakas twist priests (ehh, even more so than they are in real life... *cough*pedophile scandals*cough*) is too crazy... Maybe it's because of the exotic-ness of Christianity to Japan? idk, but it's really interesting

Kain is...
by sofistree
September 15th, 2011, 8:50pm
Rating: 10.0  / 10.0
I can't put my finger on what he is exactly, but whatever it is, it's some good $hit. He's mysterious but not ordinary (with his abilities and job, but then he also likes cute key chains), he's sexy and dark but also friendly and such a believable character (he's written so that he almost seems real enough to pop off the page, for me). He's very mysterious, and I feel like I want to know so, SO much more about him. He doesn't try to be mysterious, but he got me hook, line and sinker.

There needs to be a sequel about just him. He's AWESOME. Kind of enthralling, actually.

My favorite parts were his off duty scenes. Those were so great!
Was this comment useful?  Yes

Wow XD
by Sasageru
May 24th, 2011, 4:37am
Rating: 10.0  / 10.0
This series amused me so much. The only character that makes a re appearance is Kain (i presume that is his name). But he has such character and his 'after work is done' actions make me laugh xD I was also surprised by the smut in this o-o i expected smut but not of the quality we saw - intense is the only word that comes to mind haha. Excellent art as always from this mangaka and an amusing collection of short stories with the same theme. I liked it x3
Was this comment useful?  Yes

Kain is so COOL!
by emilyslash
December 24th, 2010, 6:29pm
Rating: 10.0  / 10.0
This manga is among the best that I've read. It's one of my favorite types, lots of sex and love and a bit of comedy. I like that it is light unlike other psychological manga and theres no drama or angst. This one really cheer me up after being bored and ending up reading a tragedy(which I hate). I also love how every story is connected, love how the characters from the previous story reappears. I didn't realize this was supernatural until the last chapter. All in all, Kain is so COOL! He's definitly my favorite character in this. He seems normal yet is very mysterious and handsome. I like him despite how it is a bit creepy how he could instantly turn into someone and know so much about them(I've decided to not to much about it but he's kind of like a devil or demon). At first I thought he was an uke and was a little sad that he didn't get a lover but was pleasantly surprised when he could also be the seme. There's shota(supposedly, but he's 19 almost 20) and a threesome! That's my kind of manga! The art is also beautiful, I find that it's far better than this author's other works. I would really like to see more of Kain and find out more about him. Like why did he stop being a priest(did he commit a grave sin or something and is trying to atone for it?) and why he became a sex therapist(and why he has sex with his clients), how Bar Kain came into being, what Kain and his friend's (real) names are, and most importantly what's the deal with his power. It's great that even though they're one shots there's still sex(most that I've seen end before they do it).
Was this comment useful?  Yes

Good, but lacks plot
by kurosu_yuuki
November 19th, 2009, 12:12pm
Rating: N/A
I like it, but I think it should be continued.
I usually don't like too much sex, but as it was used for the therapy itself, it was a perfect way to make it fit in and turn it into a hardcore yaoi (although I didn't quite like the sex scenes because they were TOO explicit...)
Another turn off for me when I first heard about it was the threesome ('cause I'm the type who likes sex with love, so these stuff don't go for me), but it had an important meaning to it.

As a good point, I liked the way all the stories had a strong psychological side to it even if they were short ones.


As for the continuation, I think we NEED to know more about Kain!
He's sexy, sarcastic, lovely, and also seems to be a nice person.
I'd like to see more of his past, why he turned into someone not loved by God (the cross he uses and stuff) and stuff. He could be a regular guy and I even thought of him turning into the person his client loved as only an image for that person, but after the last chapter, we get to know he does have some supernatural power.
I'd also like to see him falling in love and having problems with it even though he's the therapist.
I think he should be uke, what about you guys?

As for the scenes with the owner of the cafe, it was really cute and funny. And if there was more, they should be together <3
Or am I the only crazy with big imagination? xD
Was this comment useful?  Yes

I loved it
by daniyagami
October 9th, 2009, 1:53pm
Rating: 10.0  / 10.0
It gave me, too, a litle feeling of "pet shop of the horrors of yaoi universe" and I loved this. All stories are interesting, I read it in a flash and ended with the sensation of wanting more. Great reading, extreme recommended.
Was this comment useful?  Yes