Login to add items to your list, keep track of your progress, and rate series!
Description
Even though J no Subete is three volumes long, each volume is a dynamic story in itself covering a particular stage of J's life. Her life is a dark story and it's a very psychological manga.

Book one is about all of J's trials and tribulations throughout childhood, during high school as he tries to find his place in the world and when he meets the somber honor student Paul... 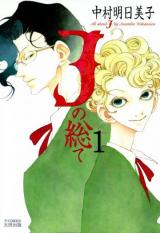 Hmmm....
by Kurarara
June 7th, 2017, 11:29am
Rating: N/A
I felt like the ending was too rushed. This is is the first manga that has the exact ending that I wished for, but the problem is that it suddenly skipped in time. I wanted the story to extend a bit longer, to see how they changed, and what happened to them.
Hmmm...
But perhaps I've simply read this a while ago and if I reread it then my opinion would change?
Was this comment useful?  Yes

Delightful!
by Nitorin
March 18th, 2016, 7:27pm
Rating: 10.0  / 10.0
This is a cleverly told story about the emotional ups and downs in the life of someone who apparently is a transsexual woman (there are other characters who labeled her that way when it's not as obvious as it seems).

Those seeking the usual topics of yaoi or shounen-ai's emotionally pink approaches are wrong with this manga, skillfully linked to the style of good ol' American movies. And this is perhaps the most amazing detail from a Japanese author: Nakamura Asumiko achieved a credible approach to American culture of mid-20th century, from pop culture.
To all this we can add a precious aesthetic style and get a really front-line work.
Delightful.

the outcome could be better
by tekiteki
November 18th, 2015, 12:52pm
Rating: 8.0  / 10.0
Truthfully, i liked her "Doukyuusei" and "Double Mints" more than this one.
The story had all chances to become a highest-rated manga in my list, being so catching with such a charismatic character as J. It lasted till the end of volume 2, and then imho the story became your common cliched yaoi.

I don't know... i never heard about "Barairo no Hoo no Koro", but i just don't like how J's and Paul's one-night stand was suddenly considered to be deep and true love. Actually, we know nothing about their relationship (common interests, time together and so forth) other than this accidental casual sex. Such a relationship seems superficial and rushed, and shouldn't be used as a climax and happy ending of a potentially great manga. Mangaka should have added something to the story of their love.

Anyway all the 3rd volume felt too simple and crumpled up with a hideous sugary ending.

amazing!
by noticing
August 17th, 2015, 8:22pm
Rating: 9.5  / 10.0
Such a beautiful story. Although it has a dark, angsty theme for the most part, I absolutely recommend this. I really enjoyed how Nakamura unraveled the story and the scars, the pain, and how J slowly releases himself from those painful memories. I can tell Nakamura really put effort and love into J's character, looks and personality. I think that really got me to love the character as well. I really loved the playfulness of J. As a reader, I related to Rita a lot and how she found J so compelling. J is a strange character, he's very mysterious and relatable, yet not relatable at the same time? Anyways, this was such an enjoyable read from the start to end. I really focused on the story, which I think was not too complicated nor too simple. The story was very organized in my opinion, the ending was perfect.
Was this comment useful?  Yes

What a journey!
by OmNom
June 22nd, 2015, 11:58am
Rating: N/A
It's psychological works like this that really highlights the author's strength in characterisation; each and every character serves a purpose to the manga, drawing out the dynamics between them as well the contrasts that sensei intended in order to convey her message. The strong personalities clash and then blend together very nicely to form such an impactful story. The famously unique artwork also adds a sense of surrealism, like it's clearly a fictional made-up plot, but readers are still very drawn as they're already invested in how it will progress. This manga is not for the weak stomach, but those who can handle it will truly be taken back by its powerful portrayals of raw emotions emitted from human nature.
Was this comment useful?  Yes

It has everything what I like, solid strong plot, depth, twists, mysteries, the feeling it could've been a real story, the characters about whom you can't stay indifferent, and the harsh reality. Just like in the real life. I love this feeling. Even supporting characters were made with so much care, it's quite impressive. It's a sad and story but has funny moments, I've been laughing a lot.
The troubles they got are serious, not just some stupid dilemma "If he'll like my birthday gift?" or shit like that. This is a totally different level. And the art - so good. Awesome. Their eyes left an impression on me every single time. A great read with an excellent artwork. I just love those stories. Couldn't stop to read until the very end ( J no subete to the 16 chapter, even without knowing Japanese heh that was tough) anyway I was so excited what'll happen next I just couldn't let it go. I have nothing to complain about, it's so rare.
I'm so glad I picked this yaoi. Really glad. Definitely memorable.

I agree with the comment below >>There are SO many things I want to say about this manga...<< yup, that's how it is... Don't waste your time to read the comments, just go and read the manga!

BIG SPOILER about THE END
Spoiler (mouse over to view)
Also I was surprised by happy ending. I was quietly hoping for it but doubted if that will happen. It was sweeter than I imagined - they all are in touch J, Paul and Morgan, Rita the journalist and the J's daughter, live together in some pleasant neighbourhood. And even J make up with his mother, who's living happily with them. Who'd have thought it'll end like that?

It's a good manga. Read it when you take the time off your day.
by 14FragmentsOfLight
May 2nd, 2014, 10:35am
Rating: N/A
I admire this manga first of all, for how the story is executing a certain idea in a dark and refreshing way. Now, I'm not the one to go for drama stories as dark as this one, but the way the story is told makes me appreciate not just the idea and the plot but as well as how good the author is when it comes to telling the story. I also appreciate the type of character this author fleshes out and focuses on all throughout the story.

Second mention the fact that -as freyakoala said- it breaks away stereotypes. It probably starts off with the idea that this manga stars a transexual who's not as happy, silly, confused or love-life-less as all those mangas I've read tend to portray. The rest of the stereotype breaking comes as you read your way through the volumes. I'm not gonna spoil it for you.

Read J no Subete First
by dreamerlisa
July 25th, 2013, 10:35am
Rating: N/A
I totally agree with Sora348, you have to START with "J no Subete" first, because Barairo is a flashback story that will disturb you when reading J no Subete since it's about different couple.
Seriously I'm also one of the victim here, I cried in the end of J no Subete because I support different pairing T_T, It wasn't a happy ending for me at all.
Spoiler (mouse over to view)
The mangaka didn't even give Andrew someone eles that he could love, poor Andrew, he still cried after 13 YEARS because of Paul!! (barairo's extra chap) how could he be all alone till the end??
hwaa~ He's my most fav character in this manga
And about the story, yes it is a HEAVY reading material, I mean for your mind and emotion, so prepare yourself first. Wether I like it or not, I'm not too sure my self, the story was good, but too depressing for me, and there's the thing with the pairing too, soooo disappointed, so sad. So please once again read J no Subete FIRST

Seriously, mangaupdates?
by jackie r.
July 14th, 2013, 5:33am
Rating: N/A
I find it incredibly offensive that a story that is explicitly one of a transWOMAN (J states herself she isn't a man, and it's more than hinted at several times) is labelled as "yaoi". I wonder if it would be possible to edit the genres? This is one of the very, very few mangas that try to depict a transgendered character in an intelligent & correct way.