Login to add items to your list, keep track of your progress, and rate series!
Description
Dramatic series about Keiji Mogami and his half-brother Naoya Amamiya who is suddenly adopted into Keiji's family which highly prizes martial arts prowess. Naoya is several years older, and therefore better at swordcraft than Keiji, but Keiji's mother pushes him to work hard in order to beat Naoya. Naoya himself seems nice at first, but then he begins to show Keiji a much, much darker side.

Latest Release(s)
v.1 c.1-9 by Nakama over 18 years ago
Search for all releases of this series 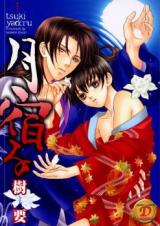 But for fantasies this is a nice read. I mean, Kaname's art is really meant for shota, her little boys always look so fragile and cute (I dont like her art when it comes to adults though, because for adults her characters look too young). The story pace is okie, and the angst is quite delicate. There are nothing new in this manga but the old stuffs were handled quite well.

The only thing I hate is the rape plot. For me a *love=rape* plot is always non-sense. But again, this is personal taste, much like you could hate shota but I don't mind.

Kaname's work is always great!
by Gattaca88
July 29th, 2011, 12:07pm
Rating: N/A
Wow the comments base coat made are really rude and insulting. You need to understand that some people enjoy this kinds of stories and they are perfectly healthy in the head. Please respect others.

I HATE rape in mangas too but I don't go around shaming people for their preferences.

call me a headcase
by whitespade
May 16th, 2011, 9:41pm
Rating: 8.0  / 10.0
but i really do get turned on by little boys get raped by thier own brothers. shiz i read yaoi too much i can only feel hot with extremes like this. next probably eroguro. brrrr

anyway, as far as plot goes it similar to lots of other yaoi and shoujo manga, ie rape equals love. but since it have shouta and incest im rating it higher.
Was this comment useful?  Yes

Liked it.
by SensualSin
March 22nd, 2011, 2:28am
Rating: N/A
Despite the fact that the kid looked young enough to pass for shota (I actually decided to read it because it wasn't labeled as such, but I guess they got over that "hurdle" by not stating actual ages), and the old
Spoiler (highlight to view)
victim falling in love with the assailant
theme, it really wasn't a bad read. The art for the main characters was pretty, and while a tad predictable and unrealistic (I don't think much manga is), it was still a decent read. I wouldn't rave about it, but I wouldn't slam it, either.
Was this comment useful?  Yes

Another Perspective on Defining Imperfect Relationships
by MightyMaeve
January 23rd, 2010, 3:55pm
Rating: 9.0  / 10.0
This book certainly isn't for the larger masses of people who write off anything non-con! SO, if you don't like non-con, try Itsuki-sensei's I'm sorry, Masumi-kun! It's an excellent read for the blushing, sweet, romantic yaoi.

Like Interval, Itsumi-sensei explores how two people respond to a similar situation. Whereas Naoya become cold and dangerous (the motivation of the abuser for Naoya was more terrible) and Mogami became angst-ridden and almost heart-crushed, but they both suffered terribly. There is a lot of pressure to become 'stronger' and 'better' in Japan, although I think that this manga is still taking a somewhat 'fantastical' perspective on things, it do think it was done well. The love that Mogami and his half-brother Naoya found, was still believable to me, even as twisted and dark-coloured thing that it was. Itsuki-sensei had scenes that redeemed Naoya and showed to me that Naoya truly did find out that he wanted Mogami to be happy, especially touching in the scene with Mogami's mother at the end.

So, I still liked this story...even with it's controversial dealing with rape and at times trouble with story telling . The art and layouts weren't as delightful as her later pieces, but her talent for soft round expressiveness on crisp white pages is certainly still visible.
Was this comment useful?  Yes

What are you looking for then?
by base_coat
September 15th, 2009, 1:23pm
Rating: N/A
Fine, you don't turn to manga looking for the real world. But what on earth do you get? Enjoying rape then love manga is pathetic. If you are like that, you should get your head checked in my humble opinion. Or you should really get a life since you are easily excited by such an overused, overdramatized, boring, predictable and actually meaningless plot device. Rape should never be romanticized. If this was a simple cruel rape or murder story, or a guro hentai, it'd be much better, because it'd be at least honest. Why are women oriented manga always like that. Are Japanese women this pathetic? And readers of other countries too?

True, there may be true stories. But not feeling sorry for the victims and instead reading such stories to get your emotional fulfilment makes me sick. Without a touch of realism, readers wouldn't feel for the characters - that's the other reviewers' point. The whole plot and something with the rapist's dark past (again) and his mom and stuff are handled very badly and left a bad taste in your mouth (so odd and cheesy!). I actually felt empty after reading this. Seems like the mangaka made the uke fall in love with the rapist just for the sake of that, just because this plot device is popular.

Realistic? Maybe... But really it is manga!
by bl0nd3sn4k3
August 19th, 2009, 9:50pm
Rating: 10.0  / 10.0
There have been abundant true stories about children who are
Spoiler (highlight to view)
raped and fall in love with their rapists, and desire that love to be true.
When one desires something, that is normally what they think of... they will also, just as this boy did, think it couldn't happen until someone sparks that thought. Then one will think, "hey, it might actually be as I have been hoping". Therefore you might get some of what happened in this manga.

However... realism isn't why I read shota!!! I do not turn to a manga to find the real world. I definitely do not turn to
Spoiler (highlight to view)
shota, yaoi, or rape manga
because I am looking for reality... however those are most assuredly my favorite kind of mix for a manga!!!!!

I am really pleased with this manga, and will probably read it again.

I agree with Pleochroic
by Kasha302
February 11th, 2008, 6:31pm
Rating: 5.0  / 10.0
If you like the usual rape victim falling in love with rapist and predictable plot then this is for you..in no way is it realistic. i do not have a problem with the incest or shota but the uke fell in love way to easily, it didn't even feel like he truly cared about the fact that he was raped multiple times or the competition...felt like they were just really like bad actors..

Wasn't able to read it all since every time I went to the next page it would be what i had predicted to happen..skipped around..last chapter was decent..i guess

this story is realistic? on what planet?
by pleochroic
April 27th, 2007, 3:48am
Rating: 5.0  / 10.0
here we've got not only incest, but shota incest, and the rapee falling in love with the rapist just because he's also sometimes nice; awww. and what's with the dumb competition between those two boys for "head of household" via their martial arts prowess, and their abusive mothers pushing them -- they're too far apart in age for the competition to make any sense. there is in fact nothing realistic about this story at all. but it's dramatically not as bad as it could be with all those strikes against it. i hold no truck with the older naoya and the way he shows his "love", but keiji is actually a remarkably mature kid and figures out the things naoya should be telling him about instead of raping him daily. i don't know that i can recommend the story, but usually i throw manga with this sort of storyline out without finishing it, and i did finish this one, so hey.
Was this comment useful?  Yes

the story, aside from incest, is very realistic. one could really relate to the characters. a must read for sweet yet sad and happy ending fanatics!
Was this comment useful?  Yes