Login to add items to your list, keep track of your progress, and rate series!
Description
Fantasy series of short stories that involves animals:

Pet Doctor Atsushi Kirishima meets a cat-guy with tail, cat ears and an injured eye when he is searching for his runaway patient animal. Atsushi can not leave the cat-guy and takes the guy to his animal hospital with him.

Hattori, an apprentice of Atsushi's father, Kenzou finds a dog in the mountains and brings it back in a car. On the way home the dog changes into a girl.

The titles stories are:

The Sounds of a Bell Can Be Heard
The Cat's Love
A Flicker of Light (two parts)
Amber's Diary (also known as Kohaku's Diary)
The Delicate Pair (also ... More...
Fantasy series of short stories that involves animals:

Pet Doctor Atsushi Kirishima meets a cat-guy with tail, cat ears and an injured eye when he is searching for his runaway patient animal. Atsushi can not leave the cat-guy and takes the guy to his animal hospital with him.

Hattori, an apprentice of Atsushi's father, Kenzou finds a dog in the mountains and brings it back in a car. On the way home the dog changes into a girl.

The titles stories are: 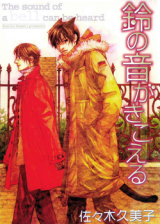 Cat Fight!
by toastmuncher
February 1st, 2017, 2:51pm
Rating: 8.0  / 10.0
More than pleasant or nice, for me, this was just hilarious. And the irony that was shown through 13's character was just too funny for me; I really like that kind of self-reflexive stuff.
The art work is also pretty solid ad nicely detailed, though it does get a bit fuzzy on some panels, and the drawing of the animals was also very detailed.
The narrative structure I felt was a bit wishy-washy and disjointed. I felt the author just set things in motion to reach a particular end, which isn't bad because one of the secrets of great stories is that they are already known; they have no secrets to be revealed in the end. But over here making 13 pushy I felt was not in interest of the narrative however, when 13 is punished by Kirishima and how 13 accepts everything that Kirishima says the story redeemed it's originality and funnies for me.
Was this comment useful?  Yes

i'm somewhere in between
by pleochroic
April 8th, 2011, 6:57pm
Rating: 6.5  / 10.0
i like the art. yes, there are some awkward drawings (this was done very early in the mangaka's career), but there are also very beautiful ones, especially of facial close-ups, and i didn't find it "common". i also don't think this is a typical case of seme overpowering uke who has to take it; rather this is a typical case of uke protesting out of embarassment, but actually liking it. there is a difference; i don't mind the latter -- though it is so damn typical that it can be tiring.

that said, i agree that the story wasn't much, and that it was disappointing after revving me all up with the "cat turned human" concept. it just wasn't explored very much (and i concur with pointing at ogura muko for a better take on the concept). the conflict between the other animals and thirteen felt somehow aborted as well. i also didn't care for the whole amber thing -- keep girls out of my BL, will ya? i don't mind them in supporting roles, but amber took too much story time away from thirteen/kirishima, and not in a way that made the animal-turned-human idea more interesting.

so yeah; nice idea, nice art, not really fulfilling execution. i like this mangaka though, and expect she'll continue to improve, because her later stories are already more complex both story- and artwise.

disappointing
by cutebunsan
February 27th, 2010, 6:39am
Rating: 5.0  / 10.0
Everybody seems to be enthusiastic about it, well...i'll be the only one being anal.
First, i was disappointed by the art. it was very common and awkward, and i'm talking about the settings, i'm talking about the way she drew the characters. Second, the concept of the story, a dead cat that comes back with a human form, was good I looove kitty-cats), but the rest of the story wasn't, it was boring. I didn't find the sex scenes that endearing, but for sure there wasn't the slightest bit of smutiness. It was the typical sex scenes in which the seme who forces himself and his feelings on the uke that has no other choice but to take it right up the ass because, after all, he likes the seme too ! oh oh oh. No, no, really that won't do. This work was pretty immature and green. It will do the deal only if you’re a teen or a mushy person ? I guess ?
If you’re looking for a story with “human-kitty” and a top quality artwork read : sentimental garden lover by OGURA Muku. THAT should do the deal.

Endearing, Light Furry Fantasy
by MightyMaeve
January 4th, 2010, 6:53am
Rating: N/A
If you're in the transformative furry fandom and you like sweet and romantic, this is the yaoi for you!

The sex scenes are never hardcore, but always very endearing. The art is expressive and competent, with only a few awkward hand illustrations some times that are easily made up for with the graceful body lines at other times. The faces are especially beautiful when they demonstrate an aching longing.

The main story line was simple and easy-going, but a few angles--such as why the dog and cat were brought back to life as humans or the whole spiritual elements such as the haunting scene where the other animals harass the cat-man--were not explored satisfactorily.

The secondary characters of the girl-dog and the older man held an intriguing father-daughter dynamic. Their scene time was very brief; it would have been interesting to explore that angle with the vet and his cat-man too.

Overall, I recommend this cute, light-hearted, fantasy tale. It just needed a little something extra, but still worth the ride.
Was this comment useful?  Yes

true~! finished too fast
by sosise
July 3rd, 2009, 7:05am
Rating: 10.0  / 10.0
one of the yaoi manga with really good art and story-shonen ai wise. i need more of the two main characters, they are just georgeous and their characters were pictured greatly.
a very good recommendation.
Was this comment useful?  Yes

The Sound of a Bell Can Be Heard
by Sleepy_Sheepy
August 19th, 2008, 11:29am
Rating: 8.0  / 10.0
The art style in this is just lovely. I'll definitely look out for more works by this author. I've already read the novel in English she did illustrations for, though I like this one better.

Story wise, it's nothing earth shattering, but it's a little fresh, and I love the characterizations. You can really feel the animal part of the dog and cat even if they look like normal humans. Worth a read on the art alone, but the story is nice too, it's an all around feel good volume.
Was this comment useful?  Yes

Very sweet
by venezia159
January 28th, 2008, 1:02pm
Rating: 7.5  / 10.0
I really liked this one. The story of Kirishima & Thirteen was a great concept, but I would like to have seen more of their relationship and its development. Chapters 3 & 4, A Flicker of Light, bring in a new character, Amber who was once a dog (you find this out right away). The story was cute and funny, but I would rather have had more of Kirishima and Thirteen. The art is beautiful, especially the color insert; I made it my desktop wallpaper.