Each year, the Ushiromiya family gathers at the secluded mansion of its patriarch, the elderly Kinzo. It has been six years since Battler joined his cousins at the annual event, but their happy reunion is overshadowed by worsening weather and an eerie premonition from his youngest cousin. When their parents' conversation turns to the division of the inheritance upon Kinzo's imminent death, Battler and his cousins reminisce about the stories their parents teased them with as children-tales of the witch, Beatrice, who haunts the island's forest. But when people start dying unna... More...
From Yen Press:

Each year, the Ushiromiya family gathers at the secluded mansion of its patriarch, the elderly Kinzo. It has been six years since Battler joined his cousins at the annual event, but their happy reunion is overshadowed by worsening weather and an eerie premonition from his youngest cousin. When their parents' conversation turns to the division of the inheritance upon Kinzo's imminent death, Battler and his cousins reminisce about the stories their parents teased them with as children-tales of the witch, Beatrice, who haunts the island's forest. But when people start dying unnatural deaths, Battler can't help but wonder? 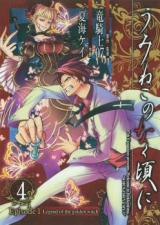 Note: You must be logged in to update information on this page.
Forum Posts Click to view the forum
Umineko no Naku Koro ni
over 8 years ago
Bernkastel and Beatrice (Higurashi and Umineko) Possible Spoilers
over 13 years ago

Not Bad, But Not Great
by kah0922
November 21st, 2012, 2:56pm
Rating: 8.0  / 10.0
This is an okay mixture of Detective Conan and Death Note. The art is good and the humor is there, but unless you know about the backstory, you're going to have no clue what is going on. Overall, it's not a must read, but it's worth checking out.
Was this comment useful?  Yes

Good but im not if i can compare it to his other manga but that isnt the point because this is its own manga
by itsjenyoumen
January 21st, 2009, 8:04pm
Rating: 10.0  / 10.0
I dissagree with you Crenshinibon because you cant judge a manga due to its releases dont blame the scanlators for being slow either because they have lives. A manga is judged by how the reader feels about it. I found this manga rather very amusing and find the plot very original as expected of the creator of higurashi but this involves more about the super natural realm compared to higurashi.
Was this comment useful?  Yes

This is one to wait on.
by Crenshinibon
January 20th, 2009, 5:03am
Rating: 6.4  / 10.0
I'm actually a pretty big fan of Higurashi no Naku Koro ni. It takes a lot of skill to correctly juxtaposition a glorified harem into a well written horror-thriller. Umineko, being by the same creators, with a similar premise, and set in the same world is exceptional in a similar way. It's genuinely interesting, occasionally disturbing, and almost always compelling. The issue is that with the pacing the way it is, it's almost painful to have to wait between chapters, and it partially ruins the experience. Given a choice, I would recommend waiting for each individual chapter (not release, but chapter as in "hen") to be completed before reading it, otherwise you may end up with a less satisfactory experience, albeit still a good one.

edit: @itsjenyoumen: You seem to have completely missed the point of what I was saying. I wasn't "blaming scanlators for lack of speed" or anything of the sort. I was simply making a recommendation that you wait for each section of the story to be completed before reading it because of the way it's paced- that has literally nothing to do with the rate at which they work. It's the same for this being serialized in a magazine- it's a series you should wait for the tankobun for due to its high tension. Breaks in between can make the pacing seem rocky since you end up suddenly stopping and starting in the middle of an intense storyline.

Really good, but suspense is better when its animated
by spicypolvoron
June 16th, 2008, 9:06pm
Rating: 10.0  / 10.0
Well, its your choice whether read this one or not. As some of you might know, original creators of Umineko are also the same original creators of Higurashi. I've only read the first chapter, because I don't really wanna spoil myself IF it gets an anime adaptation. First chapter was pretty good, well done introducing characters. But in my honest opinion, I'd just wait for the anime, because when it comes to suspense/horror, I'd prefer watching it than read. Because in anime, they can create creepy atmosphere that is impossible to create in a manga (IMO, I've never been terrified reading a suspense/horror manga, but anime adaptation of Higurashi was just O_O).

So yeah, don't read this manga if you don't wanna ruin the anime adaptation. Well, but in the end, it depends on how good they adapt it. If its the same studio/director/staff who adapted Higurashi, then I have high expectations from it. But if its different people, then I might consider reading this one.

Interesting plot but lots of undesirables
by BimboSilly
April 3rd, 2008, 4:06pm
Rating: N/A
Sons and daughters n their spouses summoned by the head of the family on an island to hear what inheritance will they get. They are bitter enemies and fight over it while their children are like normal cousins not so into the battle their parents are in. Its interesting how the servants are also brought in the plot and only one of the children at least by the 3rd chapter seems to get the idea something isnt right..the grandfather seems to have other plans u c...I like such plots but the artwork is sort of murky so it put me off a bit, still worth following..
Was this comment useful?  Yes