Login to add items to your list, keep track of your progress, and rate series!
Description
2300 years ago in China there existed a clan called the men of Bokk trained to aid and defend threatened cities with their lives. Kakuri, one of these men, is summoned to the little city of Ryo. Distrusted and even hated, Kakuri eventually gains the trust of Ryo's citizens as Tcho empire's vast army sets their camp on the other side of the river. 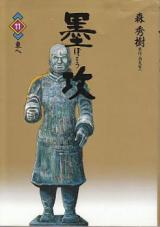 Note: You must be logged in to update information on this page.
Forum Posts Click to view the forum
Was the Bokk clan real?
over 9 years ago

Good But... So Strange
by McCasper
January 1st, 2012, 5:02am
Rating: 8.0  / 10.0
I've discovered that you can rarely go wrong with historical manga like this as long as it is researched properly. Bokko does not disappoint in this sense, you can tell the author/s put a lot of work into it, the action is good, most of the strategies are sound and most of it is realistic as far as I can tell.
However, there are some parts of this manga that are so strange that it feels like the author/s went out of their way to research strange happenings in this age in order to illustrate them. Here are some examples:
Spoiler (mouse over to view)
1. A bald, naked man walks into a river while the soldiers of an army are looking, comes back and leaves without saying a word.
2. A half-naked assassin rides a kite to get over a wall in broad daylight.
3. A female assassin, while fighting with the main character stops to pee on the ground, attracting some butterflies before resuming her attack.
and my favorite: 4. tidal waves of leeches assault all orifices of poor townspeople
Also, this is just my personal opinions but while this manga manages to pull off some touching moments, over-all the one-on-one human interaction is kind of poor.
Realistic (mostly) action and strategy with lots of blood and guts set in ancient China is basically what you get with this manga.
Was this comment useful?  Yes

23 centuries, eh?
by miss hu
June 19th, 2011, 7:58pm
Rating: N/A
great read. end-to-end this afternoon. i'd like to build a shrine to omanga. everything they touched was worth spending a summer's day in. did i waste my childhood by not reading this earlier?
Was this comment useful?  Yes

best
by Famas
May 2nd, 2011, 5:01am
Rating: 10.0  / 10.0
It's historical, realistic, bloody and action-packed. Main character is a professional fortress defender so most of the time it's him planning defense plans and enemies planning their offenses. It has it's share of intrigues and character interactions but it's mostly action-oriented. People fight, people die, survivors start again tomorrow, there're no heroes, only numbers and strategy can bring victory (and ancient chinese were pretty resourceful when it came to sieges). Certainly recommended.

its a good manga, and surprisingly in my list of faves
by urumi
August 7th, 2010, 8:06pm
Rating: N/A
at first it doesn't seem that impressive however you get caught by the intelligence of the plot and how he main character manages to outsmart the attackers, really good manga, different in the sense that the lead is not really an attractive guy but that wont really matter much when you get into the story
Was this comment useful?  Yes

To melodramatic
by Sosseres
July 19th, 2008, 1:51pm
Rating: 7.0  / 10.0
I liked the strategic approach this manga tried to take to battles. It made reading about combat unusually exciting.

What made me drop the score was the characters, they fit their backgrounds but are uninteresting. A story focusing on one person that you don't really care about is hard to keep interest in.

Art was good, nothing that stood out as either good or bad. A bit gory at times, but it is seinen.

The plot was a bit dull as well, there was a plot, it plodded forward to suddenly burst into the next plodding part.
Was this comment useful?  Yes

Seems familiar...
by palabasa
March 14th, 2008, 9:29am
Rating: 8.8  / 10.0
well i just started reading this one and i was surprised to discover that they already have made a movie out of this one..i forgot the title but it is an asian movie and it is not carbon copy but the general flow of the this manga was there..they just added a better looking hero and a hot female warrior to spice things up..otherwise its practically the same..

on the other hand i'm glad that the manga is longer a lot more complicated or serious than the movie..more characters and more conflicts..love it!
Was this comment useful?  Yes

Great War Manga
by zeidrich
October 11th, 2006, 2:52pm
Rating: 10.0  / 10.0
Action packed, and interesting storyline with an historical pre-Imperial China as a backdrop. The strategies and tactics from both sides are well-thought out and researched the technology of the era correctly.

Detailed artwork and character driven. Most, if not all, the historical prose is real.

One of the best of all-time.