Login to add items to your list, keep track of your progress, and rate series!
Description
Fifteen-year-old Otawa Ryuuichi decides to train in karate after being dumped by a girl who only liked strong guys. 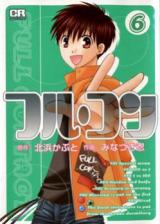 Note: You must be logged in to update information on this page.
Forum Posts Click to view the forum
Strongest Newcomer - 2nd volume-spoiler if you're not at the 2nd volume.
over 12 years ago

Spoiler (mouse over to view)
Chiharu. That shallow bitch. She breaks up with Otawa at the beginning because she only likes "strong" men. She starts liking him again because he starts learning karate. Kinda wish this would have been darker so the bitch had gotten some karma payback. Otawa forgives her a little too easily. I would have hated that bitch forever.

Luckily Otawa ends up with Kana who is vastly superior. In the end, Chiharu gets engaged with the other character I didn't like, Narita. Typical angry rival. He wasn't tsundere, he was just a douche. The thing is though these 2 were friends, but it said multiple times they weren't dating. So it felt like the author wanted to give them a happy ending, but it just came off as shallow for 2 incredibly unlikeable characters.

It's very rare for me to hate a character so much that it brings down the score, but these 2 did it for me.
Was this comment useful?  Yes

Average
by PZcolo
February 20th, 2016, 1:14pm
Rating: 6.0  / 10.0
The title is all that's needed to be said really, the story is very generic and we've seen it over and over, chars are decent but ain't that great, no twists, just a guy getting stronger and comedy ain't particularly good either. A decent read and that's it.
Was this comment useful?  Yes

Decent at best, feel good manga
by cheezepuff
March 15th, 2014, 7:44am
Rating: 7.0  / 10.0
The manga is decent at best. Can be great for a quick read. This manga starts off as martial arts but goes quickly into the realm of romance, bit of comedy. The theme is demonstrated well throughout the story. The characters are ok. When characters became interesting and had back stories, they were quickly shut off and forgotten it seemed. The manga seems rushed after a few volumes. spoiler -- Though, it did not have a cliffhanger story though, as the protagonist does achieve what he wanted. -- Overall, recommended for avid manga readers, fans of romance/martial arts or feel good manga. If you are picky, or you like only good/great/fantastic manga try to stray away.
Was this comment useful?  Yes

Well
by ragec
February 21st, 2012, 10:41pm
Rating: 8.5  / 10.0
First 15 chapters or so were good but the plot was just lost later on and chapters became more episodic. The "karate" concept was completely turn around 180 towards more of a shoujo/slice feel to it. Characters are really likable but not really unique and more so like you expect from this kind of manga.
If you expect more action then try something else. I myself feel disappointed about it. It was a nice read but It's forgettable.
Was this comment useful?  Yes

Great Manga
by DumbDoughBoy
January 2nd, 2012, 10:16am
Rating: N/A
This was a great manga. It was very enjoyable and a fun read. The artwork suited the dialogue and the characters were developed very well. Besides that, the story is somewhat predictable and the plot is not the most original, yet intriguing. In the end, I enjoyed it, and that's what matters.
Was this comment useful?  Yes

Overall, Good.
by MatrixM
October 7th, 2011, 4:59pm
Rating: 6.7  / 10.0
The last couple of volumes aren't as great but the first few are very well done. Though I didn't like how Kana seems to fall for Ryuuichi all of a sudden. There was a one-month time skip, i think, so it's not like it's unrealistic but rather we didn't see it develop at all so it seems sudden. Apart from a couple of vexations with the romance this is a very entertaining series. Would've liked to see
Spoiler (mouse over to view)
Watakayama, the dorm manager and Yumi fight someone all out, though. And know more about the latter two's high school life/past.
Was this comment useful?  Yes

END toward new beginings
by xierf
May 1st, 2011, 6:56am
Rating: N/A
It was one of the few mangas that made me happy in the end. It reminded me of the Karate Kid

This is the first time I've ever used the smiley face emoticon just to emphisize my happiness.
Was this comment useful?  Yes

Nice Read
by book_lover
February 22nd, 2011, 11:15pm
Rating: N/A
An enjoyable read. Exaggerated in many aspects, like the sheer amount they eat, and the old guy's incredible strength, but that's all part of the fun. The training of the main character seems researched and to develop at a somewhat believable pace for a prodigy, as far as someone who doesn't know anything about karate can tell. Sometimes it goes into the technicalities of karate too much for my interest, but not too often. I was, however, irritated by how the women of the manga ended up, considering their skill in karate and their strong personalities. Very...1950s, that part.
Was this comment useful?  Yes

Great!
by Gator100
January 7th, 2011, 10:39pm
Rating: 9.0  / 10.0
This is a very fun and lighthearted manga. There are no epic battles or overly dramatic romances, just a nice story about a guy learning karate and a sweet and innocent romance with some comedy mixed in. It isn't anything groundbreaking in any of it's genres, it's just a good and relaxing story anybody can read. The karate, romance, and comedy are just a means to tell a good story rather than any of them being the main focus of the story.
Was this comment useful?  Yes

very good manga to be considered as light read
by torrentchan
May 29th, 2010, 10:41am
Rating: 8.0  / 10.0
this manga isnt too deep, but isnt too light. it is good for a light read that does not require brain strain on action and plot. This manga DOES have plotline and character development, but it is light and each chapter ends a partline that allows you to pause the reading.