Login to add items to your list, keep track of your progress, and rate series!
Description
From Tokyopop:

Kamishina Fuuto would like to think he's a normal boy, but he is the reincarnation of the High Priest of Darashaal, a tiny Asian country that has just celebrated the inauguration of... its new high priest. Clearly, only one of them is the true priest, and unfortunately for Fuuto, it is he. As the celestial guardians come to dispose of him, they discover that he is not, as their leader Naaga says, a fake. Fuuto just wants to be normal and live a normal life, but he is constantly drawn into trouble, as he has an extremely keen spiritual sense and the ability to soothe ghosts. 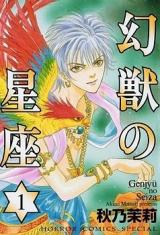 A lovely journey
by moonmystery
June 29th, 2014, 8:23pm
Rating: N/A
I really enjoyed following this guy's journey as he unwillingly, but somewhat inevitably, becomes more and more like an actual "high priest." Despite his frequent and loud complaints about being a teenager with limitless power, I could clearly see that he really cared for those around him--and sought to help them to the best of his abilities.

What is refreshing and intriguing about this manga is the boy's mental growth. By coming in contact with these animal guardians, he is forced to confront his powers and his own limits. His powers gave him access to others' griefs, tragedies, and deaths. He realizes that he cannot save everyone, and becomes more and more aware of the values of peoples' lives. This guy has doubts, and often wishes to be normal like everyone else. But he's growing, and I'm enjoying this ride as he struggle through the little steps that would amount to his eventual greatness.

P.S. I'm currently on chapter 29....I can't find any other scanlations.

Love it
by homemadekazoku
September 29th, 2013, 7:35am
Rating: N/A
I love this series, but I can't find it anywhere when suddenly read on wiki that this series was dropped. So sad T.T
The humor is really good, all of character have unique personality and none was annoying.
Hanuman is really cute too, I want to squeeze him x3
Was this comment useful?  Yes

The story is... well... I really don't know. That ending threw me off track, but even before that I dunno if I really did like the story or not. Feels kinda average... then again I can also see it being called deep and a great storyline, except that very last page. One thing for sure is that it's certainly worth reading.

The art is one of the best as usual. I adore Akino Matsuri-sensei's style, especially her artwork. Gorgeous.

But you know how it feels when a story finally reaches it's climax? That final boss battle just about to begin? That feeling of nervousness and excitement at it's peak? Expecting for the best ever chapter but what you come out with is absolutely 0. Yea, 0. Nothing left. ARG!~
Was this comment useful?  Yes

one of my favorite
by pyonk
March 29th, 2011, 6:32am
Rating: 10.0  / 10.0
I really really loooooveeeeeee this series!
The whole story really captivating!
Unfortunately, i feel that the ending is unfinished =___=
There still some question unanswered and the fight between fuuto and mahadi not end yet.
I want, I wish, I hope, There is a sequuueeeeeel !!
please Matsuri-sensei you have to give this awesome manga a proper ending >.<!!
Was this comment useful?  Yes

The only fault is the ending
by sumore
December 12th, 2009, 1:54am
Rating: 9.0  / 10.0
This is an amazing series. Great story, likable characters. I personally think this is better than Petshop of Horror. The only thing I'm disappointed about is the unfinished ending. I really want to see how Fuuto vs Mahadi battle ends
Was this comment useful?  Yes

....
by dreamer00013
September 30th, 2009, 8:16am
Rating: N/A
good art, good story, good manga besides the fact that nothing much happens in nearly 20 chapters. You could have cut it down to 10 chapters with a very nice pace, but nevermind.
I don't mind that (more to read!!) so I'll give 10 points for now. But I really hope Tokyopop finishes all 14 books.
Was this comment useful?  Yes

But...is it finished?!! I really doubt it because it got up to the stage where the final showdown is just about to happen and 'wham!' - Finished....WTF?!?!

My Fave 4ever!!!!
by ruru_allen
June 2nd, 2008, 4:11am
Rating: 10.0  / 10.0
LOOOOOVEEEE it so much!!! even tough its not been fully translated, so i must wait for the legal comes out to know the continuation of this manga. but it is truly the best manga for me.. love the story, artwork, n how the characters well build.. everything is sooooo great!! ive read it for so many times n never get bored of it. cant wait for more...
LUV U!!!!!
Was this comment useful?  Yes