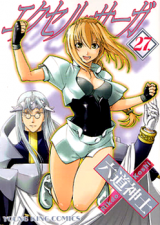 Note: You must be logged in to update information on this page.
Forum Posts Click to view the forum
Digital Edition
over 7 years ago
Does anyone actually read this?
over 14 years ago

Utter disappointment
by Seregosa
August 17th, 2018, 11:42pm
Rating: 5.0  / 10.0
The 5 score is kind of a neutral middle, it wasn't extremely bad but it wasn't very good either. Well, in this particular case, I gave it because the beginning was acceptable and fairly amusing, something which changed more and more after every volume. It got worse and worse. At the middle, it was starting to turn to garbage and towards the end it was just a freaking chore to read this manga, I forced myself to speedread through 12 volumes simply because I wanted some closure. In the end, I was left feeling empty inside and felt I had wasted so much time for absolutely no satisfaction, hell, I even felt annoyed and perhaps even pissed off. 5/10 stars might be too generous, 3/10 should be more appropriate, but out of respect for the first few volumes and that I loved the anime, I gave it a 5/10.

So, here we have a manga that set out as a gag comedy manga, but later on deviated from its supposed path way too much. Adding quite a lot of bad drama(this author sucks at writing drama) and similar crap. The jokes were also kind of bad, they're honestly boring most of the time, just a few managed to hit home well. There's plot holes everywhere.

The characters in this manga is what killed it the most for me. Towards the end of the manga, I found myself either disliking or plain-out HATING almost every single character. Excel is included in this, her personality started to get more and more annoying, her blind devotion to ilpalazzo which didn't even make sense, how she didn't have any drive on her own, how she was pretty much just a doll made to serve him and couldn't function without him or even question him in any way. She's just a pimped-up slave. I wanted so many of the characters to just die. I hated the romantic pairings between certain characters, hell, I was DISGUSTED by them. Ilpalazzo was just a broken doll from start to end and never properly talked or showed his personality, he just existed because the author wanted someone for the mc to swear loyalty to and as a "boss" figure. Other than that, he fulfilled no purpose whatsoever, talk about an empty husk of a character, he had no reactions to anything. That leaves us, as the readers, unable to understand him or feel for him, it also screws things up because we can't understand why she'd be so loyal to him... Because... THERE IS NO GOOD REASON.

The only character I found myself fond of is the drill-haired girl(and maybe menchi, the "dog"?, she felt real and not fake, there wasn't any deep mysteries and she was true to her personality. She had some proper spirit of her own and wasn't just a slave.

So, the author also repeats his own scenarios a lot, he loves stuff like amnesia and treats it as an on/off button where you can lose your memories and then when you regain your old memories you forget all the memories you received during the amnesia period. Several scenarios repeated themselves in an almost identical fashion.

Later on, the storytelling becomes extremely chaotic and it's clear the author doesn't know what the f*ck he is doing anymore, hell, there's wasn't really any mc anymore despite it being named "excel saga", excel was barely present for so many volumes and when she was, it was irrelevant, she barely got any screentime the last 15+ volumes, everyone else got similar amounts of screentime or even more. Things just happen, but not in a gag-manga way since the story is kinda serious to some extent at that point. It's also annoying how excel, in addition to being something of a mindless slave, was also always underpowered, she could never really deal with anything properly. The mc's team had no real gear, so they were always outclassed by the opposition that had their super suits and robots.

It's a kind of frustrating manga, towards the end I just got vexed every chapter. It was a pure chore to read. The ending also sucked in every way possible. Extremely rushed for everything the author didn't do during the manga itself. It went from zero to f*cking ridiculous instantly. People got paired up, the city was conquered and the world was conquered and whatever the f*ck else. Don't expect any proper conclusions to anything in the middle, everything happens at the very last few chapters, before that it's a story that tries to be funny and sometimes serious only to fail miserably and accomplishing nothing.

It was extremely cringeworthy. Read at your own risk, I recommend watching the anime and being happy with that, it's much better. Just pretend that the end of the anime is the end of the whole story. It's much better than the real ending and all the torturous reading you'd have to go through to get to it. I'm actually very, very disappointed and sad, I expected so much yet was sucker-punched repeatedly by reality. Sigh. The anime is way, way better. It's loyal to its comedy tag and coherent throughout, it's also way funnier with more, better and varied jokes. Well, they're barely the same, the anime is superior and the manga inferior, kind of ironic since it's usually the other way around. I'm now going to re-watch the anime for the first time in a few years just to get this bad taste out of my mouth from this failure of a manga. Hell, you might even say that the anime version is a parody of the manga version, it takes the things in there, improves them, adds more and makes everything way more funny. It's out of control as it should've been. Ilpalazzo actually have a proper personality in the anime and everything is way more interesting. Sorry to say this, but the manga sucks and shouldn't be read unless you have absolutely nothing left to read. If you watched the anime and wants to continue seeing the story and wants to get more similar stuff, give up, the manga isn't going to provide that.

Brilliant and hilarious!
by Foggle
March 31st, 2012, 3:54pm
Rating: 10.0  / 10.0
While the earliest volumes are a bit shaky in both art and writing quality, Excel Saga eventually elevates itself to a much higher level than most comedies. Rikudou's sense of humor is almost perfectly in tune with my own, evoking big laughs on nearly every other page. The storyline is barely comprehensible, but the characters are all lovable and the sociopolitical satire is spot on. If you like your comedy dark, witty, somewhat violent, and occasionally subtle, you'll probably love this manga. And (in later books) the artwork is great, too! The facial expressions are some of the funniest you'll ever see.

Brilliant
by sleekie
December 17th, 2010, 2:32pm
Rating: 10.0  / 10.0
Series is genius, but the humor is primarily what will make it sink or swim for most readers, and the first volume is much more rough around the edges than the subsequent ones. The characters are brilliant, the satire is laser-accurate, and the author never seems to run out of ideas. Thoroughly recommended.
Was this comment useful?  Yes

Changes as it goes
by saxon1231
June 25th, 2010, 8:45am
Rating: 10.0  / 10.0
If you read whats readily available of this manga your probably not get to into it, but as the volumes increase the story starts to take form, but still retains its crazy, almost in a senseless way, feel. The manga greatly differs from the anime in the sense that the manga DOSE have a story line, even if it is hard to grasp. The story its self is still very weird, but that is what makes this manga so intersting, the fact that it has a crazy feel to it while retaining an almost minimal amount of seriousness and a maximum amount of fun. In the end the manga is a great read but its not for everyone, but I think at least everyone should give it a try!
Was this comment useful?  Yes

Very funny and overlooked
by Casio
December 3rd, 2008, 6:21pm
Rating: 9.0  / 10.0
The whole point of this manga is a parody of other mangas. It's artful in its presentation and Excel is hilarious. I highly suggest this to anyone who likes a comedy filled series with lots of randomness!
Was this comment useful?  Yes