Login to add items to your list, keep track of your progress, and rate series!
Description
Set in Japan during the '20s, Mitsuyaku is the story of two childhood friends from very different walks of life who grow up to become lovers. Yuuichi is an ambitious type from humble beginnings, working his way towards success. His beloved Iori is the scion of an important family -- a beautiful, dark-haired creature with a gentle nature.

Unfortunately, one of the aspects of belonging to an important lineage is marriage. Will the hero have the guts to stay with the love of his life, or will he succumb to his family's pressure to shore up the dwindling finances by marrying rich? 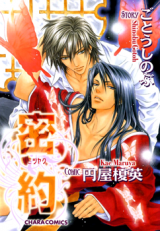 Wow
by fovika
January 16th, 2014, 5:21am
Rating: 10.0  / 10.0
It's been a long time since I've seen art that beautiful. Every character was stunning in their own way, there were no plain janes at all. Which makes for a great read, even if the plot sucked. Which it did not! The plot was surprisingly good. The ending was a little too open for my tastes, but that all depends on your taste

I think the 2 mothers had something going on, if you ask me. And I'd also like to know what happened to the uncles "prey". Other than that, a GREAT read. And feels much longer than only 4 chapters, which is really nice.
Was this comment useful?  Yes

Okay...
by orenjichan92
December 31st, 2013, 11:04am
Rating: N/A
First, the art. As usual, Maruya-sensei manage to create beautiful young men. The art is gorgeous as always. (I fell for the uncle, though, almost had an eyegasm each time he appears.)

The story is original and the concept of the clan is quirky, with a depth. I was surprised that Maruya-sensei can create this kind of story. While she can create nice stories, most of them lack of depth and impression. Nice stories are not GREAT stories. And this one is certainly great. But well, since the story is created by another person, namely Gotou-sensei, it's not that surprising. (I don't mean to criticize her, just stating my opinion.)

About their emotion, I think it is pretty flat, sure there are sadness, love, pain, but none of them are shown to the fullest. But then, again, it happens to all of Mayura-sensei's work. Hope she could work on them more in the future.

The ending annoys me. It still does. As good as an open ending is, I need to know Yuuichi's decision. It feels like the authors simply do not want to decide, so they threw the decision for the audience to decide.
Spoiler (mouse over to view)
Sure it is mentioned that the mother got Iori's letter from time to time, but it can always be fake, some forged letters by Yuuichi's clan. (Or am I being a little too paranoid?)
Was this comment useful?  Yes

Original storyline, stunning art
by Kleineputchen
March 2nd, 2012, 7:18pm
Rating: 8.0  / 10.0
Well, first things first, as always with this artist the art is stunning, so amazingly beautiful guys (Am I the only one who fell for the uncle?), so love-filled scenes, the emotions are so well conveyed. It's one of the rare author who's able to make you feel the passion and love between the characters so strongly just with the drawings. It is almost enough worth reading only for the art. I wish there would be more works from her out there.

But that's not all this story has to offer. The storyline is really original, beginning like a mild slice of life story, abruptly turning into a misterious one in few seconds towards the end and leaving you on a very open end. Some might be troubled by it as I was at first. But even though I felt irritated not knowing more about what happened to those two, I have to agree with the comment of lylicagalatea on the fact that what matters here is their choice. I just feel that the only thing not really well managed is
Spoiler (mouse over to view)
the question about whether being with Yuuichi will kill Iori or not, or did Yuuichi gave up about saving Iori's life, I don't think so.
Or maybe this is also up to us to imagine what it would be. The pace was good as well, I never felt bored or rushed.

Besides, the bond between them is really strong. Even though they're facing tough times, every moment they spent together was full of sweetness and tenderness. It was so cute to see them being so considerate about each other.

All in all, if you don't mind very open endings, I truly recommend this. More than entertaining, you will be drawn into their world and pace, and forget about reality for a while.
Was this comment useful?  Yes

But still, this is worth reading. Art is gorgeous as ever, THAT IS REASON ENOUGH!

whatever. it's still amazing
by Rockacherry
July 28th, 2011, 9:33am
Rating: 8.0  / 10.0
At first i thought this just a normal slice of life/romantic story. but i was surprised by the twist at the end where Yuuichi's uncle dropped the bomb about their clan. I was like, is this supposed to be like this?? i was too, started to doubt whether their relationship is based solely on love or the predator-prey attraction. But still, we can't deny that these two boys love each other so much that they willing to do anything for their loved one. which is why the ending, although it seemed like it came to abrupt halt, still did the justice about the love they portrayed. they are together. and to them, it was good enough. i admit i hate open-for-your-own-interpretation ending, coz there are so many possible ends and i usually went to the unhappy one. but positive thinking is always the best, and all is well

a romantic ending
by lylicagalatea
January 27th, 2009, 1:50pm
Rating: 7.5  / 10.0
1) The supernatural aspect is very strong in this story, and it deserved some more chapters without a doubt. It could be a very interesting background for a longer series, it's a pity it ends in one volume.

2) The couple is wonderful, they face the marriage with their strong love and it is heartwarming and heartbreaking at the same time to see their relationship.

3) The love scenes are hot but not too explicit, especially Iori's sweated hair... it's one of those details that will make your head steam!

4) The ending is perfect. I don't agree with the other reviews that say that it is incomplete or rushed. I think the author wanted us to understand their decision, it isn't important what their end will be but their choice is what matters.

I will miss them and I'd like to see more of them but the only hinted final is very romantic and leaves space to imagine a happy ending for both of them.
Was this comment useful?  Yes

Good but..
by PrettyAyumi
June 15th, 2008, 8:25am
Rating: 9.0  / 10.0
The art was sooooooooooo delicious. It was so beautiful. One of the loveliest I've seen in a long time. I'm even tempted to say that it is better than that of my favorite, Yamane Ayano-sensei's art. I would have given this series a 10 if not for the ending which I found to be really wanting and unsatisfying. The story had so much potential. If this was a longer series, it's definitely gonna be really big. Gimme my sweet, delicious, happily-ever after ending! Waaaah! But, overall, it's a really good read.

I hope Maruya-sensei resurrects this and continue this wonderful story.
Was this comment useful?  Yes

An instant favorite
by faerygoddyss
September 7th, 2007, 11:40am
Rating: 10.0  / 10.0
This is by far one of my favorite yaoi stories. But like everyone else has said the ending...ugh, it saddens me. It was too abrupt too...unfitting, I dont know what the mangaka was thinking. She must have been in a rush to finish it because this story deserves a far better ending. I'm still rating it a 10 though. Every yaoi fan should read this one!
Was this comment useful?  Yes

So Close
by Jadis31
July 19th, 2007, 10:08pm
Rating: 8.0  / 10.0
This would have gotten a 10 if I'd rated it before reading the last chapter. Sadly, Gotou-Sensei really dropped the ball there. The art is gorgeous throughout, but the story falls apart in the final stage.
Was this comment useful?  Yes