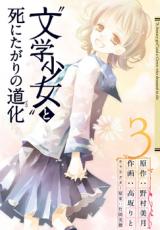 Note: You must be logged in to update information on this page.
Forum Posts Click to view the forum
Bungaku Shoujo Gets 3 All-New Anime DVD Episodes
over 12 years ago
Tragedy?
over 12 years ago

Original, introspective and thought-provoking
by saraneon
December 6th, 2020, 10:49pm
Rating: N/A
Though I seldom get immersed in stories of a relatively shorter length, "Bungaku Shoujo" to Shi ni Tagari no Douke explores different elements and at its core, provokes the readers to think about what makes one different from others, and if that difference makes one a monster, a creature incapable of love or hatred. The story does not sugarcoat suicide, nor does it embrace suicide in a cliche, typical "fairytale" manner, but rather prompts the readers to think beyond the circumstances of someone's death, and to generate thoughts beyond the surface of a situation. The story spans across many different aspects and is a thoughtful consideration of how society today jails us from being our true selves, and that the opinions of others affect us [i]more than how we think about ourselves.[/b] It explores how humans wear masks to hide their true selves, and that the brightest person hides the deepest scars. The powerful connection between the insightful views and realistic thoughts, worries and concerns of the protagonists draw the readers in, making us resonate with and sympathize with them. Overall, this is a masterpiece that I highly recommend.
Was this comment useful?  Yes

There's a gap in the story or something
by MiuNim
August 14th, 2018, 4:26am
Rating: N/A
I just read this story and I just finished it.. it's good*thumbs up* but it feels there's somethings missing you know that girl in his classroom? Yah? What is she trying to say? It feels like the story was cut or something.
Was this comment useful?  Yes

nice.
by Imou
February 22nd, 2012, 8:51am
Rating: 10.0  / 10.0
Great story overall. I liked it very much. But it's a story you read when you're in the mood for. It's not light, don't get fooled. It's depressing, so I don't recommend it to those who want to read it just because they are bored. They will never grasp the depth of this manga. Don't read it if you're feeling depressed either. It won't do you any good (well, it does get better by the end. But still...).
Was this comment useful?  Yes

depression
by whitespade
December 14th, 2011, 4:28pm
Rating: 8.0  / 10.0
these kids really need psychiatric help. they kinda irritate me with their over full emotions, not because i dont understand, but because i understand too well the cloying madness of self hatred due to chemical imbalance in the head.that's why i think they are just too sad - they can be helped if they seek it. at the very least the youkai is someone bright to look at or this manga will become filled with people with too much self importance.
but in the end everything is alright, so i supposed enduring them make the story much sweeter in the end.

pretty good
by swiftstrike
January 18th, 2010, 2:48pm
Rating: 10.0  / 10.0
great art (especially in color), and the storyline seems to be the same as the novel (although it seems to delve more into his past)
Was this comment useful?  Yes

...
by canucks
December 12th, 2009, 11:22am
Rating: N/A
style seems to deviate from original novel's intent. Too many deformed caricatures and too often. Hopefully mangaka will recitify that with experience.
read all of the novels, and trust me it's quite epic.
Was this comment useful?  Yes

literature.
by Yenoh
June 28th, 2009, 3:02pm
Rating: 9.0  / 10.0
How fascinating.This story kind of gives me the vibe of Yumeka Sumomo's works,which I love.Though the story mostly gives the dramatic sense, I like that the author somewhat put some comedy scenes.

It's interesting how Tooko
Spoiler (highlight to view)
eats paper and comments how tasty they are
; however, don't they all just taste the same? O.o [Tooko's imagination is definately wild...]

The art is simple,yet beautiful. Refreshing to look at,actually.
Hopefully, the story progresses to the romance side a bit faster ^^.
Though the story isn't finished yet, I definately recommend this to people.
*A plus to Tooko's dialogue,very funny,yet so descriptive

I think I've said enough..
Was this comment useful?  Yes

*speechless*
by wtothez
June 27th, 2009, 3:12pm
Rating: 10.0  / 10.0
wow i can't even explain how i feel about this book with simple words. This is just beyond awesome.
hope they continue doing these because just wow dude just wow. I have read many manga but none have got me this good since watachi-tachi no tamura-kun.
two thumbs up
Was this comment useful?  Yes

Bungaku Shoujo
by inkfish021
January 3rd, 2009, 12:24am
Rating: N/A
I was manga hunting today until I came across this, the synopsis and art hooked me in. I'm a big fan of romance/mystery type stuff so I gave it a try and read the first chapter and I really like it so far. :] This series seems it will be promising. I'm realllly anxious for the rest of the chapters to be translated, times like this I wish I could read Japanese!
Was this comment useful?  Yes