Login to add items to your list, keep track of your progress, and rate series!
Description
“'I’ll create a witch!!”
During the 17th century, the German alchemist Johann Schultz successfully created a witch. He then injected that power into his own blood.
In the present day, as a result of a scheme created by his cousin, Yomoda Rena, Shurutsu Kenichi, a high school student and a third generation German, fights on secretly as a blood relative of "Brocken", all in order to hunt down those who abuse the artificial witch theorem. Yet for reasons unknown, he transforms into a Magical Girl "Heroine"...? 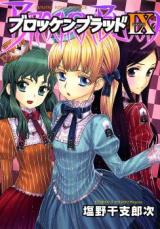 If not, enjoy the lols. Its outrageous, hilarious, and you'll never know what is going to hit you next. Its definitely a gem in its own right
Was this comment useful?  Yes

Holy crap!
by robbit
August 11th, 2010, 6:37am
Rating: 9.0  / 10.0
This is one of few series to make my cry. From laughter. Every page was just really really funny. The concept is overused and retarded, but I think it only contributes to the humor. I recommend this to any magical girl fan who is bored of the norm. Heck, I recommend this to anyone who needs a laugh.
Was this comment useful?  Yes

It can be summed up by:

Here's hoping that the next chapter or so actually starts to get things interesting, but if it doesn't, I'll just go back to reading Oto x Maho.

I dunno
by dezin19
March 2nd, 2010, 9:58pm
Rating: 8.0  / 10.0
The pace feels wrong on this one. It's like the author shoves a plot into one chapter, when it could easily be 3. And there isn't much for character development...So far this manga is purely fluff comedy, with a tad of violence. If that's for you, great.

I'm merely reading it as a light read. I guess it's okay, but it's a little hard to get into.
Was this comment useful?  Yes

Funny Parody
by CatzCradle
February 14th, 2009, 12:29am
Rating: 8.5  / 10.0
Hilarious magical girl parody using genderbending and ridiculous villains. I also love how the main character is able to stay so manly despite being in a magical girl outfit all the time~ XD