Login to add items to your list, keep track of your progress, and rate series!
Description
Aki Sora revolves around Aki Aoi and Sora Aoi, a pair of close siblings who have shared an intimate bond since childhood. During their coming of age, they each come to realize the true depth of the love they feel for each other and consummate that love in secret. They keep their younger sister, Nami, Sora’s twin in the dark about their new relationship. Nami, clueless of what is happening in her household aims to set her brother up with her best friend, Kana Sumiya. Despite these relationships Nami seems to have feelings for someone near to her too but keeps them secret.

Note: The first an... More...
Aki Sora revolves around Aki Aoi and Sora Aoi, a pair of close siblings who have shared an intimate bond since childhood. During their coming of age, they each come to realize the true depth of the love they feel for each other and consummate that love in secret. They keep their younger sister, Nami, Sora’s twin in the dark about their new relationship. Nami, clueless of what is happening in her household aims to set her brother up with her best friend, Kana Sumiya. Despite these relationships Nami seems to have feelings for someone near to her too but keeps them secret.

Note: The first and third volumes will no longer be printed following July 2011 due to the Tokyo Youth Development Ordinance bill due to its depictions of incest. Less... 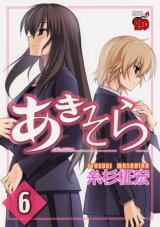 One of the worst manga series I ever read.
by IchigoRadiance
February 28th, 2018, 1:50pm
Rating: N/A
The series had a pretty good premise. A pair of close siblings become even closer, too close for some. What could have been was a story that explored the taboo nature of their relationship. Whether it condemned or condoned it didn't matter. It could have even kept all of the sex.

But what we got was a story that got smuttier and smuttier every chapter with little regard to consequences.

Aki shows little regard for how her relationship with her brother could be perceived, or cared whether it was right or wrong. But Sora was far worse. Infidelity may as well have been his middle name because when he wasn't having sex with his older sister, he was having sex with some other girl.

Granted some of the events weren't necessarily avoidable. For instance, at one point he gets knocked out at a party and repeatedly date raped. He tells Aki about absolutely none of his sex encounters.

He shows absolutely no remorse for his actions. The story could have been trying to portray polyamory in a positive light, but it absolutely failed. The only time the story actually judges any of the character's actions, it judges the incest. Honestly, the incest is the least of it all. Aki leaves him out of a newfound guilt, and Sora is crushed.

Sora thought he would get Aki back, because he really loved her and she really loved him. He was half right, or maybe not. There can be sad endings. There can be depressing endings. But this was bad. I think if the story was more focused on the actual romance and taboos of it all it would have been a lot better. A short story about a pair of siblings romantically loving each other before coming to terms with tragic taboos would have been much better. Instead the story went nowhere for too long and wrapped up in some of the worst and contradicting ways it could. Even a nice boat ending would have been better.

For a better portrayal that looks at the issue seriously, I would recommend Koi Kaze. The story is much more taboo, being about a pair of siblings with an age gap of 12 years. It doesn't ignore the taboos.

Not that great
by kimiz
August 7th, 2016, 3:07am
Rating: N/A
At the beginning it seemed okay, as it started to get into the taboo subject of incest. It kind of showed the progression between loving another to lusting another, but it got very muddled towards the middle as it introduced more characters that seemed out of place. For example the girl that was an exhibitionist convinced the male protagonist to go on a date with her to pool where she basically paints a bathing suit on herself and goes and sunbathes nude and later in the chapter even tricks him to go an orgy with her where she loses her virginity to some random guy. The manga introduces her, I think, three times and the only reason I can think of why I remember her is because she did some nude modeling for the art club in one chapter. It dables in other subjects such as sexuality
Spoiler (mouse over to view)
where the twin sister questions why she was even born a woman because she loves her best friend. She eventually takes this frustration out on the protagonist, her twin brother, by threatening him into having sex with her
. Going towards the end, I could not even understand what the hell was going on as the manga started to have plot twists and such and continued to add sex scenes in practically every chapter, most of which had no real substance to the plot and were placed as if they were just there to appease the readers. So basically, don't read this if you want substance. If are gonna read it, better have some lotion and tissues at hand because it is basically a doujin with an "okay, but I don' really care" plot.

Some rants:
Why the hell does all the male protagonists from all the series done by this mangaka look like a fucking female? I understand Aki-Sora because twin siblings, but what the fuck is up with the other ones? The one manga where the guy can move his soul into inanimate objects is basically a chick, but with no hair. Also, why the fuck does all of his series need to have some sort of sexual exploitation? I get that it is subject that you would want to explore and let people know, but what the fuck dude? Seriously, can't you have done it a bit more eloquently or something?
Was this comment useful?  Yes

Well...
by PaterFrog
October 23rd, 2015, 7:33pm
Rating: N/A
So, everyone who read this, read it for an obvious reason.
Aside from that reason, this story isn't actually all that bad. Infact, it does get pretty emotionally engaging. The sex-scenes are sometimes in the right place, but many of them simply aren't necessary for the story. That said, I can't remember one that wasn't... hot for all the forbidden reasons.
Was this comment useful?  Yes

It got a messed up ending...

not bad on the beginning, Scary on the middle, but sucks at the end...

There Parents Didn't Gave A Fuck, So, Why Should They ? - Crazy Logic and A Immature Ending.

Sexy
by Roloy
July 1st, 2013, 1:27am
Rating: N/A
First off, SEXY, secondly SE...no way in hell any of this is possible but it was still pretty entertaining. The plot is kinda interesting. There are three children in a family. One oldest sister and two twins. The "incest" is focused between Aki (Older Sister) and Sora (The boy of the twins) while Nami is a lesbian (For the most part)

Somehow Sora has the bitches lining up with his nervous/shy attitude, but that just makes it more fun when he is constantly seduced by multiple sexy girls.

The only thing i found odd about this manga was the fact that Sora never got any of his bitches pregnant. (And that never seemed to be a concern)

Entertaining with some few artistic moments
by Cedante90
January 29th, 2013, 4:17pm
Rating: 7.0  / 10.0
After seeing some comments here, I wonder why there are so many people able to read manga but not genres and tags / categories on this side - as this manga delivers what the description says. Critics upon this, are just uncalled for. Critics reagrding the execution of the story however are justified by any means, specially with this story.
Nevertheless I can still recommend this manga if one doesn't held the expectation astronomicaly high. This manga is basically a hentai, so its primary focus is (who could have guessed) on the intercourse with random events leading to the obvious act. But if one is able to detach this 'hentai forced events' - let me call them that way - one will find a much greater meaning to the story: Notions of love relationships that aren't ment to be and the sentiment of unreached longig. Yes very overused topic in this genre indeed, but I don't go with the expectation of finding some kind of enlightenment in a mainly ero-oriented story. Still there were some few moments in the story were I paused and gazed upon the panel. This rare moments, which I liked art and story wise (on of them being the ending) is the reason why I can recommend this manga.
If one is interested in an average incest borderline-h story with overused topics but some intense moments, than this may be something for you.

A joke.
by addnine
February 14th, 2012, 8:50am
Rating: N/A
Like BadKarma was saying below I started this manga hoping for a deep complex story of brother and sister love but it turned out to be a joke. Don't take this manga seriously because the main character doesn't give a shit and will stick his shit up anything that moves.
Was this comment useful?  Yes

A crime against narrative and story structure.
by Criminal Intent
January 31st, 2012, 2:51am
Rating: N/A
Everything I was gonna say has already been addressed by BADKARMA a few posts prior. It looks like the one good thing that came from Japan's child protection act was that it put this dull, lifeless series out it's misery.

I don't mind incest when it's done right, like Flowers of Evil or Koi Kaze (which imo tried too hard to be taboo), but Aki-Sora is just so lifeless and incoherent that it makes me very angry inside. Aki is the standard yamate nadeshiko nee-chan found throughout the hentai world. You know the one that bows bends to her brothers every beck and call, and is devoid of any personality or existence outside of her master's will. Sora is also the standard effeminate shota who's only purpose is act like a walking hard-on and engage in debaucherous sex w/ a naive youthful glee.

Oh well, the author sucks at h-manga as well, so I guess it's my own fault for giving her the benefit of the doubt.