Login to add items to your list, keep track of your progress, and rate series!
Description
From Operation Boredom:
Yamato Onidzuka. Childhood bully, punk, and sports prodigy. His old childhood friends are terrified of him, as he used to bully and harass them on a daily basis. When he transferred to a special sport's school, it seemed like his friends' worst nightmare had finally come to an end. But now that he's back, it seems like the nightmare has returned. 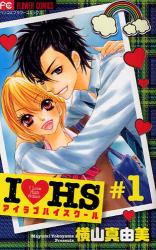 Yamato Sucks! >:O
by mlat26
March 8th, 2013, 3:50am
Rating: 5.0  / 10.0
Yamato's personality is really a turn off. I didn't really enjoy the manga and what he did was just so self centered and stupid. I would have kicked his ass. It's not a good sign when you finish reading a manga and find yourself being angry e_e
Was this comment useful?  Yes

Done and Left?!
by Kinky-Chan
July 8th, 2012, 2:08am
Rating: 8.0  / 10.0
Spoiler (mouse over to view)
I didn't like the part where Yamato slept with Megu and then suddenly left and went to pay his dad's debt in America. It feels awkward. Thank goodness it was only a year and half! If Megu had to wait for 10 years I'd probably tear the manga into half. Overall, the art is nice but not something you did wanna read it again.
Was this comment useful?  Yes

u effin serious?
by dreamit.
October 23rd, 2011, 10:31pm
Rating: 2.0  / 10.0
WHY THE HELL DOES THIS HAVE A HIGH RATING
saw the comments and thought this would be a good shoujo manga to read but wttffff? did everyone totally miss the part about him being a conceited douche? Oh, everyone must have been too focused on his sugar-coated words that covers him being a frikkin horny asshole. The girl is just as dumb for staying with him -.- ESPECIALLY THE PART
Spoiler (mouse over to view)
when he gets angry at her for kissing a guy when she was in MIDDLE school WHEN HE WAS FRIKKIN SURROUNDED BY GIRLS HAVING SEX AND MAKING OUT WHEN HE WAS ABROAD! then he says shit like "its because you weren't there with me" or some shit i mean wtf?! you seirous?! and how it's different if a girl does it! holy crap... so dumb. HATED THE ENDING! so selfish just leaving like that and she's stupid for being okay with it

Started out great.
by oinkmoorawr
July 24th, 2011, 12:14am
Rating: 8.0  / 10.0
The manga started out great; it was hilarious, cute, and romantic. The characters were quirky and the story seemed very promising. I wish they did make the beginning a little slower, the friends all got back together rather quickly. I was going on thinking this would get a 10/10.
However, after that teacher was introduced into the story, it just went downhill from there. He wasn't funny, and he just made the story depressing and boring (but he was kinda cute in the very last chapter :3). I felt the story was too focused on sex, and it just made me very uncomfortable. The ending was very cliche and unmemorable, it just felt like a cop out. I would recommend reading maybe the first chapters, they are quite funny, but the ones after the school lodge incident, just ignore them. 10/10 for the beginning, 5/10 for the end.

Spoiler (mouse over to view)
I didn't even realize that they did a time skip until Yamato popped back up.

The art, specifically the eyes, was pretty screwed up half the time and the storyline was cliche as hell. The conflicts were also pretty retarded but typical for shoujo manga. The childhood bullying though was...what was it there for? I forget about it after the first chapter, and now I'm realizing how misleading it was. Their all friends apparently, and always have been. I thought they would all hate him or something.

Though I'm dissing it, It wasn't that bad. I can ignore everything else wrong with it because I was interested in it. The ending just killed it for me. Give it a try if you want.
Was this comment useful?  Yes

awesome!
by boo-bop
May 8th, 2010, 10:36pm
Rating: N/A
i was so happy when they finally started updating this! i read the forst 2 chapters and loved it and despteratly wanted more! i love mangas that the friends are a big part in the manga.
the characters are aweseom! its like the gorgous squad, they;re all pretty and hott in this manga; i love it!
Was this comment useful?  Yes

light-hearted
by windshadow
December 8th, 2009, 8:13am
Rating: N/A
read some of her other stuff and wasnt too impressed with them.

but this one seemed different with a sort of background to them. i feel that it's moving too quickly though; like how the friends get back together almost immediately after the escape incident despite being apart for a long period.

still, the last 2 chapters were a great light-hearted laugh worthy read. and well, the much much improved art is a great bonus.
Was this comment useful?  Yes

you'll be laughin' while you're readin' it xD!

hahaha and you'll love it♥!