Login to add items to your list, keep track of your progress, and rate series!
Description
Iori always liked Naoto, even though Naoto cannot accept the fact than someone from the same sex is in love with him. But seeing the sad expression on Iori´s face, he can no longer refuse Iori´s feelings...

This is the continuation of the younger brother story from Self Portrait... 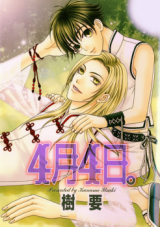 The characters are just... extremely obnoxious.

Naoto is a dumb b*tch, he has absolutely no personality of his own, and all his reactions are extremely ridiculous and extremely tiring to read about. He's a bad stereotype gone (even more) wrong, and I genuinely wanted to smack his head against a wall every time we were given an insight into his pseudo philosophical thoughts.

Iori swings back and forth between being: an extremely annoying crybaby, in constant need of attention and reassurance, and that you'd want to shoot in the head after ten minutes/ and a f*cking crazy yandere self-centered psychopath, that rapes left, right, and center when things aren't going his way. Bipolar, much?...
Anyway in case of a lasting relationship, I'd advise Naoto to get used to get his ass raped every time there is a quarrel, or a misunderstanding between them, or when Iori is in a bad mood, because apparently that how he functions... (and he'll have to take care of a giant retard-baby the rest of the time. I'm actually pitying him here, even though I really think he's a dumb sh*t)

So, yeaaaaaaaaaa... Don't read it. It's not worth your time.

No lovable characters
by Namiya
June 27th, 2012, 3:09am
Rating: 6.0  / 10.0
Naoto looks way too young for my taste (yes they're the same age, they're high schoolers, so it's only fake-shota) and he is just wayyyyyy too forgiving to Iori who first forces his feelings on him several times and then forcefully rapes him.... and Naoto still says "my actions made you do it" and "You looked so sad when you raped me" ... sigh.
It's an interesting story in general, but I wish the characters would take their actions more seriously.
Yes there may be people who don't mind if they're being forced, but you wouldn't take all the blame and act like it was your fault, you'd at least be somewhat hurt, even if it's just physcially.... it'll take some sort of toll on you.
Thanks to the messed up personalities, I didn't like ANY of the characters in this manga, except for the homophobic-turned-gay older brother from the prequel.
That said, the art is very pretty.
Was this comment useful?  Yes

I was shocked.
by paalis
April 15th, 2012, 2:42pm
Rating: 3.0  / 10.0
Ok, This was bad. Are you kidding me? I love you because you raped me. It would have been great if the kid said "sorry I loved you, but you have only yourself to blame. No way I'm getting hurt every time you don't understand me". I read through it because I still hoped for something, but it just got worse and worse as it continued. I can't understand why Self Portrait was rated lower.
Was this comment useful?  Yes

Not bad... ^_^
by fisukisuki
April 7th, 2012, 9:23pm
Rating: 8.0  / 10.0
I like the feeling that this manga show. Feelings from both of the main character are be felt can be understood. But, this is one of the manga that I probably will not read more than twice. Because I feel there is something missing and can't quite understood. So, I wouldn't recommend this manga but if anyone wants to try to read it, go ahead! It's might be not bad as what you think.

another seme-rapist apologist :|
by robertW2471
June 1st, 2011, 12:26pm
Rating: N/A
I really like her stories (Tsuki Yadoru excluded), but this is just a bunch of sh**!
At the beginning I was fascinated to read about a feminine seme, because I love the unconventional stories, but this was just aggravating.
The uke looked and behaved like a little preschooler, and the seme was a total idiot who tried to suppress his feelings for no reason at all, and then just rapes the little boy because he can't control himself. WTF. Such behavior is disturbing, immature and deviant.
Ok, I read some yaoi Manga with almost the same plot but especially the ending of April 4th just left me with eyes wide open in total disbelieve!
The uke blames himself for being raped and even apologizes to the seme. And that is not all!
The seme is a total di** , he agrees with the uke, accepts the apology and seems to be happy that the uke is to stupid to press charges or taking revenge!
It's like, the uke's fault that he was raped because he didn't realize the feelings of the seme, but at the same time the seme didn't even want the uke to know about his feelings. Utter bullsh**! This scenario is contradicting in a way that it is not enjoyable anymore.
It shows Japanese traditional gender roles, with the the woman at fault for stirring up and seducing the man with her beauty in a way that he couldn't possibly control himself anymore. But the woman in her submissive and understanding way realizes that it was her fault to begin with. RAGE!!!
I know that some people have rape-fantasies and it is kinda enjoyable in pure smut-works without a backup-story, but if the author tries to present such a story in a serious way,with the offender and victim ending up together and even apologizes the rapist's behavior is just enraging for people like me who like equality and mutual respect between a couple.

Let's not forget that people rape to feel total power over the other individual, it is not to sexual gratify the offender. Raping somebody requires a total disrespect ind indifference in regard to the other person's feelings.
Well, it was still better than okane ga nai, and that says a lot!!!

Readers who feel like me will hate this story.
For others who feel that Rape equals love might certainly will adore this Manga.
Was this comment useful?  Yes

Not my favorite art style, but...
by Poemi
October 15th, 2010, 12:21pm
Rating: 9.0  / 10.0
I like this because it's somewhat angsty yet sweet, and I love the fact that one of the main characters is a transvestite!
Spoiler (highlight to view)
And it's cool that he's the seme!
I don't think I've read any BL manga with this kind of character before; it's refreshing to read.
Spoiler (highlight to view)
It would have been better if there was a little more depth in resolving the rape scene, instead of "I've forgotten about it, do whatever you want." "Okay! *smile*"
I haven't read the prequel, Self-Portrait, but it doesn't seem like you really need to in order to get the story. But it seems it would be a good idea to read it to understand what his brother gets so flustered about, huh? It definitely makes me curious!
Was this comment useful?  Yes

Interval Sequel Much Better
by MightyMaeve
January 23rd, 2010, 8:37am
Rating: 7.0  / 10.0
Of the two sequels the secondary characters of Self Portrait prompted, this one was the least interesting to me.

The art was a bit more cluttered and distracting and the story, while still really enjoyable, didn't have the punch of a well-rounded delivery. Interval had a great connection with the one boy realizing that the despicable behaviour of the person who abused him was actually born from the same anguish of feelings and thoughts that he himself had; they only choose different ways to act. It had a great psychological circle. This one didn't have as great a development.
Was this comment useful?  Yes

Very nice...
by Sakura_Hikizaki
September 6th, 2009, 3:13pm
Rating: 9.0  / 10.0
I enjoyed reading this series! I have to disagree with some of the reviews here. I perosnally thought it was good story. The rape was a little to much...but over all it was cute and touching series. I was glad that Kaname sensei did a follow up of them.

Beautiful art, and a great read for any Kaname sensei fan!
Was this comment useful?  Yes

Iori screwed up at the end, and guess what? Still gets Naoto.
by Zandra
August 5th, 2009, 12:31pm
Rating: N/A
... What the? I read this a second time (along with Self Portrait) so I could read Interval knowing all of the characters. I'm happy to see a seme who isn't emotionless and all, but this guy was ridiculous! I can understand him feeling hurt, but he had no right to feel sorry for himself or Naoto when he was the one who kept screwing the kid. If he didn't want to bother him or whatever, why keep jumping him? But that wasn't the main reason this manga rubbed me the wrong way.
Spoiler (highlight to view)
When he thought his love for Naoto was 'putting too much pressure on him,' why the heck would he forcefully rape the kid, tell him he never had any say in the matter, and then say it'll be the last time? He shouldn't have done that, especially if he says he loves him and wants to STOP doing those things for Naoto's sake. And then why should Naoto be the one feeling sorry?? Naoto felt as if he was the reason Iori was 'forced' to rape him continuously. Riiight. So he goes over to apologize, confess, and take all the blame, and Iori acts like a dick to the kid. All would have been okay if he hadn't gone and raped the kid and stopped acting nice. *sigh* And after all that Iori doesn't even apologize. I hate semes that don't at least have the decency to apologize after raping their ukes, because "I love you" is no excuse.
At least the ending was cute?

Boring
by riney25
January 28th, 2009, 1:22pm
Rating: 3.0  / 10.0
Only read it due to it's prequel, Self Portrait (much better than this one). Didn't like the characters (one of them looks like a girl, and the other looks like he's in kindergarten). Plot? What plot? Just a bunch of angst boys who love each other, but too afraid to say so. The only redeeming part was the art, but I could care less about it.

Do yourself of favour and don't waste your time.
Was this comment useful?  Yes