Login to add items to your list, keep track of your progress, and rate series!
Description
Since the conclusion of the original series, Rin and Alice are leading happy lives. Their son, Ren, is a very normal boy. But one day, a man and a woman as beautiful as an angel appear in front of him and tell him about a power! What is this power Ren suddenly has? The much anticipated sequel to "Please Save My Earth"! 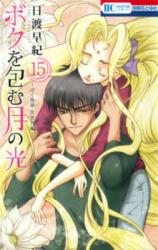 Note: You must be logged in to update information on this page.
Forum Posts Click to view the forum
Boku o Tsutsumu Tsuki no Hikari Ends, But New Sequel Is Set for March
over 7 years ago

Doesn't compare to the original
by wontonsoup
December 23rd, 2020, 2:10pm
Rating: N/A
I usually won't expect a sequel to keep up with the original, but the degree to which this fell off of Please Save My Earth is astonishing. I couldn't even get through half of this series. Please Save My Earth is among my favorite manga of all time and this series pales in comparison in every dimension. The characters, even those from PSME, are shockingly vapid compared to their PSME counterparts. Even Hiwatari's art style has deteriorated. While this isn't the worst comic I've ever read, I wouldn't recommend it to anything and would certainly have to caution anyone expecting it to be similar to PSME.
Was this comment useful?  Yes

Great sequel
by sinxer
September 12th, 2015, 3:36am
Rating: 9.0  / 10.0
Loved it more than the first and the art has clearly evolved(though at first I did notice some things were a little out of proportion). I love how even though this is a sequel the story has also evolved but wasn't a rinse and repeat, it has its own feel to it and can stand on its own. In saying that I believe anyone wanting to read this must read the prequel as everything makes a lot more sense but don't expect both mangas to feel the same as the art and story are quite different.
Was this comment useful?  Yes

Lovely
by Verito.S
September 7th, 2015, 6:10pm
Rating: N/A
Please Save My Earth has only one problem, that isn't even his fault, the art isn't as nice since it's a little too old schoo.. But in Boku-Tsuki the Art is a lot more 2000'style so you can see how pretty (actually) are Mokuren and Shion.

I loved this series, I cried like a baby (OMG, SO MUCH), but it's so lovely, so pure! Like, you feel better after you read it.

, champion! It was cool of the author not giving too many details, since you know... Rin was 17 (16? maybe) when he had Ren, it'd be pretty weird get into that in such a lovely manga. And it was so nice seeing Mokuren and Shion being happy, in the prequel they don't even know they love each other (OMG I CRIED SO MUCH ;_

I recomend this to everyone-
Was this comment useful?  Yes

The story may be good
by Fara_way
June 2nd, 2013, 6:49pm
Rating: N/A
The story may be good but the art puts me off. HIWATARI-sensei's art is not as detailed as before, not to mention the drawing that grows disproportionate. I love sensei for the story making, but I just can't give her credit for the worsening of art, especially it's now a trend for mangaka to use CG and use photoshop for screentone. Many mangaka's older handmade artwork are far better than using CG, that includes Hiwatari-sensei's.
Was this comment useful?  Yes

Overall a good sequel
by residentgrigo
May 31st, 2013, 11:45am
Rating: 8.0  / 10.0
This series is a good but not amazing sequel that takes a while to get going but manages to turn into something very unique. Saki´s art was also a bit more satisfying last time but the art change ends up working over time.
Don´t let my slight negativity put you off as Please Save My Earth is one of my all time favorites and i am overall very satisfied with the manga but but you need to read the prequel or you won´t like or get this one at all.
The side story in Kioku Senmei becomes very plot important later too but i found that one rather mediocre and this series handles it´s repercussions a lot better. Read Spirit Circle (9/10) and Hi no Tori (10/10) for even better manga with similar themes. Part 3 is coming soon btw.

Good but..
by amused90
June 24th, 2011, 3:46am
Rating: 8.0  / 10.0
I ordered the first volume without knowing this was actually a sequel to "Please Save My Earth" (Didn't know what happened then) but I read it anyway and thought it was good! Although, the manga-ka doesn't seem to reintroduce the characters, and to which I couldn't grasp the situations at times. Looks like I have to catch up with the prequel first before I move on to the next one!
Was this comment useful?  Yes

When I started reading it, I thought at first that it would be like a light comedy or something, and it was, it's really cute, but then I looked at some raw's, and though I didn't understand anything, I could tell by the pictures that Shion and Mokuren (especially Shion) are still causing some trouble to our beloved characters, and usually - not in a good way. So even though this manga is a lot lighter than PSME, sometimes you can still sense it's prequel's dark undertone.

Anyway, I really enjoyed the 4 chapters that we got and the raws that I found, so I only have 1 request: SOMEONE, PLEASE PICK THIS MANGA UP AND SCANLATE IT!!!!

Pleaaaaaase !!!!!!!
by kikivalentine
May 29th, 2011, 1:07pm
Rating: N/A
please!!!!!, someone scanlate this wonderful manga, I begging you, ughhhh
I have been waiting too long,,, hiks...
they could complete the PSME, but why not with a sequel, does not make sense
Was this comment useful?  Yes

Its really good!
by pryscillabq
April 17th, 2011, 5:59am
Rating: N/A
ive read the manga please save my earth which is AMAZING so i wanted more and i found the sequel and its really sweet i hope i can find the manga where i live,because i dont think there is someone scanlating it ;x
Was this comment useful?  Yes

nice start to a story...
by oblique
October 31st, 2007, 6:14am
Rating: N/A
wow! after reading please save my earth, I immediately moved on to it's sequel. It's a nice start to a new story! All the old characters are there, although the sequel is more concentrated on Ren (Alice and Rins son) than the two main characters from the previous story.

Also, the art is drastically different! I'm not complaining though, because I love Alice and Rins new looks. it gives the story a more modern feel than please save my Earth.

So, to conclude, a nice start. Now all we have to do is get SOMEONE TO SCANLATE THE REST!!!! (hint, hint). lol
Was this comment useful?  Yes