Login to add items to your list, keep track of your progress, and rate series!
Description
From MangaProject:

Fuuko is a happy and cheerful girl. One day, two cousins, Daiya and Ichi, move into the apartment upstairs. Cold Ichi and mischievous Daiya gave a very bad first impression! All three are going to the same school as well! How will Fuuko's high school life turn out?

Note: Based on the manga, a TV-Drama was aired by the name "Love Buffet." 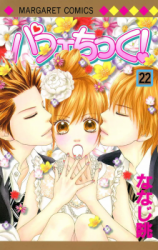 Note: You must be logged in to update information on this page.
Forum Posts Click to view the forum
Whats goin on now? [spoilers]
over 8 years ago
I'm longing for new chapters!
over 13 years ago

I don't know why many have such bad comments for this manga. I in people loved its plot and the end was real, since they usually put the girl begging the boy and waiting for him with open arms. So I think it's cool that that didn't happen with this manga.


The only thing I didn't like was its ending, which ended up being like most of the endings of a shojo manga.

P.S. Excuse my bad English.
Was this comment useful?  Yes

Drama-filled garbage
by Eloriel
September 19th, 2017, 12:29pm
Rating: 2.0  / 10.0
This is one of the few manga series that I had to drop. I just couldn't handle reading about the ridiculous angst-filled life of these teenagers anymore, especially not after finding out who she ends up with. But what really made me drop it was that I realized that I didn't like any of the main characters any more. This series have honestly made me wary of reading any of the mangaka's other series, since I just don't trust them to write any characters that I end up liking for more than a couple of volumes. This series contained way too much nonsense drama for my taste, so much that it got ridiculous. It got more than a 1 simply because I did like the characters at first.
Was this comment useful?  Yes

I just regret i read this manga
by Miyacamoto0610
September 18th, 2017, 2:57am
Rating: N/A
I just hate how the ending turns out , thats why i dont read love triangle manga cuz sometimes writers dont picked what are their readers want....worst manga ever.&#128071;
Was this comment useful?  Yes

Finished
by nekochav
July 18th, 2017, 2:19am
Rating: N/A
Finally finished the manga after several years. It was good until the part that Fuu-chan just chased Daiya until the end of the manga. I read that the mangaka only decided to go with Daiya because he was the unpopular choice amongst the people she asked. They wanted the lead to end with Ichi, which I also wanted because the annoying jerk in this story is Daiya. He was indecisive until the last few chapters, and constantly dragged everyone around. While Ichi persevered, and made up for his mistake. I seriously hated that part with the married woman because things were going well for him and Fuu-chan until that point. I wish the story had ended before that part because all of what happened after that until the end showed how selfish Daiya was and how faithful Ichi was.

disappointed
by AbbyAW
May 6th, 2015, 8:36pm
Rating: N/A
the lead is extremely wishy washy, annoying and behaves like hes 5 years old and doesn't know how to express herself when it comes to relationships. i actually liked this manga years ago then dropped it as the scanlations wernt complete. I regret picking it up again as i cant drop something i started so it was a challenge to read
Was this comment useful?  Yes

Love triangles and angst
by Matic3d
July 10th, 2014, 8:31pm
Rating: N/A
Im going to be blunt. Another shoujo centered around a love triangle between a nice girl and two horrible men. One is a womanizer, the other has a cold heart and violent temper, both treat her like dirt while she puppies around them and gets her feelings hurt only to repeatedly forgive constant slights, grabby sexual advances, bullying rivals etc. This should be titled "A girls guide to codependency and psychological abuse."
Was this comment useful?  Yes

Depends on which guy you like the most
by McCamyTaylor
February 5th, 2014, 9:11pm
Rating: 9.0  / 10.0
I think that some people reading shoujo manga pick they guy they like the most and hope the main female will pick him, too. Fuuko picks the guy who suits her the best. Since most readers are like NOT Fuuko, most people would not make her choice. Cat Street had the same issue. Lead made the right choice---for herself.
Was this comment useful?  Yes

It was good.
by Pinky Poison
August 5th, 2013, 9:45am
Rating: 8.0  / 10.0
Yes, like what I've just said. It WAS good, amazing, funny, adorable and I was TOTALLY in love with it!
Spoiler (mouse over to view)
I was so in love with Ichi. He was such a sweet, gentle guy to Fuuko when she was dumped by Daiya, a guy who didn't know what love was. Actually, the story should have ended with a happy ending that Fuuko and Ichi being with together. But.. he then later met his ex-girlfriend. He became absolutely indecisive! Ugh, maybe the mangaka had already planned THIS incident to happen from the very beginning.. cos she put the mug which Ichi's ex-girlfriend gave him in the first chapter. That was totally NOT a good idea.
But I still love this series because of Ichi.. TT____TT
I really love him.. maybe I'll reread this manga someday.

Meh-
by angeltheya_12
August 24th, 2012, 12:16pm
Rating: 1.0  / 10.0
I'm surprised it lasted 22vol. (0-0)
Honest comment bout this manga... To span the series, the story sucked.
I can imagine this was the 'kimi ni todoke' years ago( have many chapters with drifted story)
How can a lovely fuuko become a cry baby weak, helpless fuuko?!
This series should have ended AFTER the third switch of guy.
The story is just frustrating because the girl always cry, the guy hates her, some misunderstanding , then they stop dating. Somehow they start going out again.THAT'S THE STORY!same cycle in plot line that lasted for about 22 volumes. THIS. JUST. SUCK
Was this comment useful?  Yes

One of the first manga's I read
by lostinshalott
July 14th, 2012, 6:54pm
Rating: N/A
And to this day it annoys me. The manga starts beautifully I liked that you saw some real realism with how she fell in love with Daiya but then had to fall out of love with him. You see her form a more healthy love with Ichi and choose a guy for deeper reasons, you end up really rooting for them.
Spoiler (mouse over to view)
However I remembered when I started this manga on the sleeve of it the manga-ka spoke about how she was talking with her colleagues about who Fuuko would end up with they all said Ichi and so she decided that she would be ~different and make Fuuko end up with Daiya. This was printed earlier on in the additions so I always had a feeling that the manga would take the route it took. I also found it incredibly petty that the manga-ka decided to write her manga based on being different in only one aspect. In many other manga's the lead chooses the fun guy over the serious guy this manga could have been the exception to that rule but it is not, instead it becomes illogical and stereotypical.